#REVIEW: “SEE HOW THEY RUN” 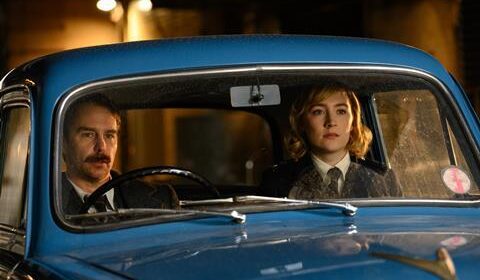 It is the 1950s and Agatha Christie’s ‘The Mousetrap’ has just celebrated its 100th show in London’s West End. The Show is a rousing success and there is talk of a film adaptation. During the Cast and Crew party however, the Film’s Director Leo Kopernick (Adrian Brody) is murdered and literally everyone is a possible suspect. Now it is up to Inspector Stoppard (Sam Rockwell) and film-obsessed Constable Stalker (Saoirse Ronan) to crack the case before it is too late.

Though its absence on the Fall festival circuit may seem like a red flag, SEE HOW THEY RUN is a rather enjoyable and lovingly made delight. Director Tom George and Writer Mark Chappell, both making their Feature film debuts after a litany of TV credits, have crafted an entertaining ode to Agatha Christie and murder mysteries at large. There are some modern elements sprinkled throughout (like fourth wall breaking and a meta narrative that takes its time unpacking), but unlike Rian Johnson’s Knives Out franchise, this is a film that embraces and reflects its Film Noir underpinnings. While it may borrow a bit too much of its style and Production Design from Wes Anderson, this whodunit is a whole lot of fun to watch unfold.

SEE HOW THEY RUN’s ensemble is wonderful and clearly enjoying playing in the Film’s sandbox. The Affair’s Ruth Wilson and powerhouse talent David Oyelowo have a blast playing against type, reveling in acting in something substantially less serious than usual. Brody’s nuanced, smart-ass work is aces, with his narrated first reel introductions of all the players and the world they inhabit acting as one of the highlights of the Film. Heartthrob and current It-Guy Harris Dickinson does a terrific job hamming it up as the legendary Sir Richard Attenborough as does Reece Shearsmith as British Producer John Woolf. I could go on, but suffice to say this great Ensemble work together well and do a fantastic job breathing life into Chappell’s scripted words.

The one-two punch of Rockwell and Ronan are hard to compete with though, each bringing their A-game to their roles. Rockwell’s accent and deadpan style are impeccable, and his well-adjusted mannerisms will make you seriously question why he has not acted in a film like this before. Ronan is an absolutely hysterical scene-stealer, given a tremendous amount of time to wax her comedic chops in ways she has not been afforded in the past. Her accent is thick and a slight challenge to understand, but you will be laughing too hard to care.

Despite some pacing issues in the middle, I found SEE HOW THEY RUN a whole lot of fun and the kind of movie that kept me guessing until the end. It is delicately and lovingly made, with a spectacular cast of top-notch players having the time of their lives breathing life into these characters. Hopefully you will catch onto the plethora of red herrings more quickly than I did.

Searchlight Pictures release SEE HOW THEY RUN on Friday, September 16, 2022.