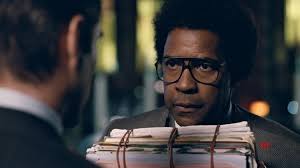 The Film follows Los Angeles based criminal public defence lawyer Roman J. Israel (Denzel Washington). Growing-up in Los Angeles, Israel has seen the injustice that happens to particular demographics in the legal system and has since devoted his life to defending the innocent. And he works for a firm that falls in line with his devotion. But when his boss dies suddenly, he takes up a job at a big firm that cares more for money then proving innocence. And soon Israel’s morals slowly peel away around him.

Writer-Director Dan Gilroy creates an intriguing story on the meditation of law, racial barriers and what happens when a good person is pushed too far. There is a lot to be said on important matters of the justice system and how they treat racial minorities. But none of the compelling aspects of the story are examined deep enough, they’re only scratched upon the surface. What Gilroy excels at is the creation of his lead character. Israel is a man with a purpose, good morals, and determination. And he comes with a backstory of how he became that way. But no actor could breathe life into Israel like Washington does.

From beginning to end, Washington is there creating a person from a character on paper. And when the Story begins to stray from focus it’s Washington who keeps the viewer enthralled. He’s a magnetic force who disappears into Israel entirely. It’s Washington who forces the audience to believe in Israel’s actions even when they turn on his, and the viewers, morals. This is a role that shows the complete range of Washington and he relishes every moment. Colin Farrell who plays George, the wealthy lawyer who hires Israel, is able to show his range also. He begins as an antagonist to the pure-hero Israel is but then turns some-what into a protagonist against Israel’s fractured-hero. Both Washington and Farrell have compelling chemistry that keeps the viewer intrigued.

Overall, Roman J. Israel, Esq., showcases a powerhouse performance from Washington. It also has an intriguing moral compromising story but seems to hold back instead of diving completely in.