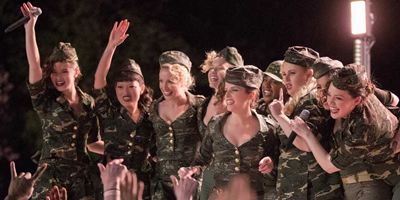 First the good aca-news: Pitch Perfect 3 is vastly superior to its immediate Predecessor and includes not a single bar of Flashlight. In less cheerful news, it is clear the ladies are tired of their aca-franchise and ready to close the door on the Bellas and making music without the pesky need for instruments.

Having found little success in post-college life, the original Bellas decide to ditch their lives in America and reunite one last time for a good cause: a USO tour of Europe. The moment they are informed the tour is a contest to see who will open for DJ Khaled, they put on their aca-game faces and set out to beat the competition. Naturally boys, other bands, and daddy issues interfere with their plans but they never let anything get between them and their aca-dreams.

Sadly, Jesse and the Treblemakers are not in this Threequel but Ruby Rose and her group Evermoist fill the role as adversaries. While the trope of pitting women against women grates, the real tragedy is that nothing ever comes of the rivalry making the only real tension a convoluted storyline about the tiresome Fat Amy (Rebel Wilson) and her estranged father (John Lithgow).

Anna Kendrick’s Beca is still held up as the best singer of the group but it is clear she is as bored of this role as the rest of us. Too much of a professional to ever phone-it-in, Kendrick strides gamely through the movie with a single endgame in mind: the fulfillment of her aca-contract. Brittany Snow, Anna Camp, Hailee Steinfeld (Chloe, Aubrey, Emily) and the rest of the Bellas all get plenty of screen time as they wrap up their arcs and remind us why we fell in love with the acapella group in the Movie.

Director Trish Sie is new to the Franchise but she clearly knows her way around a Riff-Off, which as always, is one of the Movie’s highlights. The musical arrangements are on-point and will sell plenty of soundtracks – the goal for any Movie Musical. Whenever the Movie falters, Sie cuts as quickly as possible to the Bellas singing, a formula which works despite its predictability.

Accompanied by screen musical veteran Mike White, Screenwriter Kay Cannon returns for this final installment with mixed results. The aforementioned side story with Wilson and Lithgow remove them both from the main action so much it feels like a decision to separate Wilson from the rest of the girls rather than choice to give her a stronger B-Plot. Where they succeed, however, is in giving the girls – even the always ignored Ashley and Jessica – moments in the spotlight.

After three Movies, the Barden Bellas’ aca-adventure is aca-over. In Pitch Perfect 3, the Bellas we met in 2012 have moved onto adulthood with less than stellar success but they prove while their aca-family is occasionally pitchy, they’re always aca-awesome.

Click here to cancel reply.
#REVIEW: “I, TONYA”
#REVIEW: “ALL THE MONEY IN THE WORLD”