#REVIEW: “MARK FELT: THE MAN WHO BROUGHT DOWN THE WHITE HOUSE” 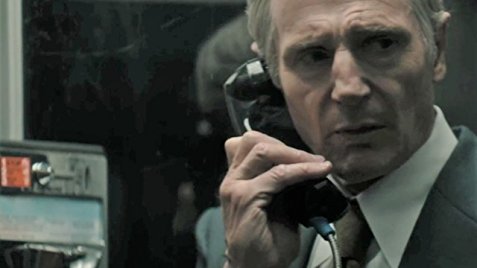 A President under fire from Congress and the media turns to backdoor deals with the FBI to clean-up his messes. His efforts to change the national conversation are thwarted when someone close to the situation talks to the media and the men in charge at the FBI, including a man everyone describes as a boy scout with a strict moral code, cannot find the leak. Despite what you may think, I am not discussing recent events in the United States but rather the new Movie Mark Felt: The Man Who Brought Down the White House.

In the wake of J. Edgar Hoover’s death, there was a power vacuum at the FBI which Mark Felt looked to fill. Instead, President Nixon appointed White House insider L. Patrick Gray (Marton Csokas) to step into the role of Director. Before the ink was dry on the door, Watergate exploded and Felt’s investigation was being stymied by his new boss making it impossible to follow clues that lead his team directly to the White House. Gray and Felt were at loggerheads over Watergate when the Washington Post printed a story about damning story using details given to them by a source they called Deep Throat.

As Associate Director of the FBI, Felt (Liam Neeson) was renowned for running a tight ship. He was devoted to the company line and felt strongly that the Bureau was an entity above reproach. The devolution of his moral character occurs only when faced with the possibility the FBI itself was in jeopardy of losing its status as an independent investigative unit. The eventual question of his true motivations is never fully answered which is perhaps one of the only mysteries the Movie leaves to the audience’s imagination.

Writer/Director Peter Landesman clearly enjoyed teasing the audience with Felt’s secret identity. From close-ups on his cigarettes (which he was rarely seen smoking) to repeatedly following him into parking structures, and filming him in shadow, Neeson’s trademark gravelly voice serves as the final clue to this easily solved puzzle. The set-up of Watergate, Felt’s investigation, and Felt’s eventual onscreen meeting with Bob Woodward all seem underwhelming because, as Woodward observes, “We’re lost in detail.” The rather distracting subplot about Felt’s daughter and the Weather Underground for example, serves only to explain Felt’s eventual downfall and to humanize him. The latter falls short, however, since the narrative also eliminated his son.

Led by Neeson and Diane Lane (as wife Audrey Felt) the Movie’s strongest asset is its cast. The Bureau’s band of loyal G-Men (Tony Goldwyn, Josh Lucas and Brian d’Arcy James) are great counters to Neeson’s stiff Company Man. Their performances ground the Movie in ways the deified Felt cannot for while he is rarely shown to have faults they are allowed to have doubts about not only Watergate but Felt himself.

A story about patriotic insiders trying to bring down a crooked President would seem almost fantastical if it weren’t based on historical events. Mark Felt: The Man Who Brought Down the White House is sure to please American history buffs with its new look at the familiar Watergate story.

Mongrel Media release MARK FELT: THE MAN WHO BROUGHT DOWN THE WHITE HOUSE on Friday, October 13, 2017.