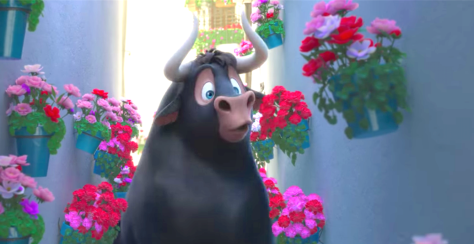 Blue Sky Studios always manage to surprise and awe audiences with their beautiful and colourful films, and Ferdinand is no exception. It is beautifully-animated, however that is unfortunately where  the praise ends. The voice acting is fun and charismatic but the story gets lost in finding its way to its audience.

Ferdinand (John Cena) is the story of a bull who is conflicted about what path he is supposed to take. He isn’t like the other bulls, he doesn’t want to fight or take down matadors, he just wants to smell the flowers and live his life. When he was a young bull he escaped Casa Del Toro, his birth place where he and his father and their friends lived in order to not be forced to become competitive bulls and found a home with a new human family who treated him as family. Through some misadventures, he is seen as a monster and believed to be violent and is captured and sent back to Casa Del Toro. He is then forced to team up with a band of unlikely allies forming of old and new friends in the form of Valiente (Bobby Carnavale), Guapo (Peyton Manning), Bones (Anthony Anderson) and Lupa (Kate McKinnon) to escape Casa Del Toro and be able to live as free bulls.

The voice work of the Cast makes for a fun Movie, making Ferdinand watchable. John Cena plays the tough but lovable and sensible Ferdinand, while Bobby Carnavale plays the  alpha-male villain perfectly. Moreover,  Football star Peyton Manning and Anthony Anderson have fun with their characters but it is Kate McKinnon who shines as Lupe the goat.

The overarching problem with this Story is in its execution, struggling to maintain our attention. This is problematic when gearing  to a younger demographic with a concept that might go over their heads. Its admirable message is that no one is destined to be anything they don’t want to be, and that we ourselves hold our own future in our hands, but we aren’t convinced this will reach its core audience entirely.