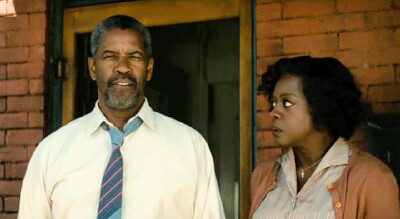 As the year draws to a close, you are probably busy with important last minute details to make the holidays special. I am, of course, talking about completing your Oscar homework. Seeing all the Movies in the running for ‘little gold statues’ is a key December task for all Cinephiles. Well, here is one more to add to the list: Fences.

Garbage collector and former Negro League baseball star Troy Maxson is not an easy man to love but his wife of 18 years, Rose, maintains an air of loving forbearance in the face of his tall tales and prickly demeanor. Their circle includes best friend Bono (Stephen Henderson), their football loving son Cory (Jovan Adepo), Troy’s adult son and occasional mooch Lyons (Russell Hornsby), and Troy’s war veteran brother Gabriel (Mykelti Williamson). The compact cast move like a well-oiled machine through gin-infused levity and over emotional landmines that would cause lesser actors to stumble awkwardly over the beautiful script.

The title refers to fences both physical and metaphorical. More obviously, there is the wooden fence Troy has promised Rose he will build in the backyard and the chain links it will replace. It also represents Rose’s desire to bind her family close to her and Troy’s need to keep everyone at arm’s length lest they hurt him first. Troy’s inability to see viewpoints other than his own build walls stronger than pine between him and his sons whom he views as disappointments.

Playwright August Wilson’s play won Denzel Washington and Viola Davis both Tony Awards when they starred in the 2010 revival of the Pulitzer Prize-winning Drama. Both actors are clearly comfortable in the skin of their characters and their performances are nothing less than stellar. Davis in particular is phenomenal as she takes the audience on her journey of sacrifice in the name of love. The moment Davis wrests the audience from Washington is heartbreaking yet she doesn’t take the easy way out, choosing instead to speak with quiet, tearful dignity for every person who has ever loved their partner more than been loved by them.

One complaint critics have had about this Film is that Washington’s directorial style made Fences seem more like a play on the big screen than a traditional movie. The theatrical style which failed to move some allows Washington to honour Wilson’s original text while simply providing larger more elaborate sets for his actors to move on. Rather than breaking up the monologues in the source material to make them more palatable to modern movie-going audiences, Washington gives his actors a chance to shine and develop their emotional beats at a more natural pace instead of forcing confrontation.

Dedicated readers of MrWillWong.com will know that I submitted my Top Ten Films of 2016 last week. While all those choices are still valid I have a very important addition to make to that list: Fences. Boasting some of the best performances of the year, Fences is sure to be on the final list of Oscar winners this February.