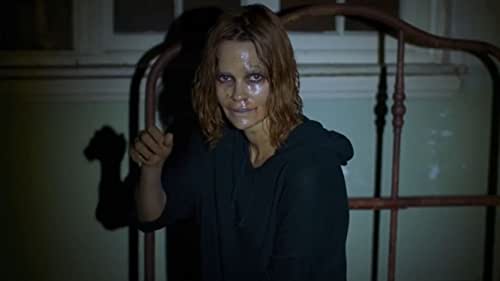 Carly (Carly Pope) has not seen or spoken to her mom Angela (Nathalie Boltt) in some time. That is, until doctors at a nearby medical centre call Carly to help assist in her Mother’s case. She is paralyzed and in a coma, and just might happen to be under the influence of a demon.

Writer/Director Neill Blomkamp returns to feature directing with DEMONIC after a long stint of shorts (his last feature was 2015’s Chappie, a far cry from the unanimous praise he received for Best Picture-nominated District 9). He swings for the fences here, doing his very best to cram as much Sci-Fi Horror into this tale of grief, trauma and possession as he can, while also maintaining the appearance and feel of a gritty low-budget Thriller. It works effectively in some instances, whereas others do not quite measure up. The scenes where Carly has to enter Angela’s mind through a digital avatar (yes, you read that correctly) feel like they were cribbed from multiple other films. This is not necessarily a bad thing, except the top down view Blomkamp keeps jumping to looks like a bad clone of The Sims computer game – complete with heads-up-display and transparent walls.

While the Score and Dialogue are less than stellar and nowhere near as solid as the makeup effects, Blomkamp’s biggest issue is setting things up and barely following through on the delivery. He has a knack for teasing out intriguing ideas you would love to see explored (even if they are unintentionally hilarious). But when the moments he is building to finally arrive, they feel deflated and superfluous. They end almost as quickly as they are introduced, leaving long gaps of exposition and boredom to settle in. It takes quite some time for DEMONIC to finally get moving, and these start/stop sequences hold it back from really coming alive. I admire Blomkamp for doing a stripped down film like this as opposed to another high budget, high concept Science Fiction picture. I just wish he were a whole lot less inconsistent with what he is trying to accomplish.

For the most part, the characters Blomkamp has created are underwritten and underdeveloped. Yet the Cast is committed and do well in their roles, each making them their own and not succumbing to any of the Film’s more outrageous moments. Boltt does particularly well as Angela and easily pivots between her character’s competing tones. Pope is even better, really making us feel every fibre of the terror and paranoia Carly goes through. It is a physically demanding performance, and one that Pope has no issue throwing her entire self into at every turn.

I am certain there is greatness buried deep within DEMONIC. The Film is powered by interesting ideas, fabulous makeup effects and committed performances after all. Sadly, any greatness that emerges is undone practically immediately by an ineffective script and subpar deliveries on awesome set-ups. If it had better focus and stronger payoffs, DEMONIC would have been a whole lot better.

VVS Films release DEMONIC in select theatres and on Digital on Friday, August 20, 2021.

*Please ensure you exercise caution in observing COVID-19 protocols if seeing this in-theatre.*