Hollywood united once again for the biggest night in Film, the 85th annual Academy Awards, held at newly-coined Dolby Theatre (formerly Kodak Theatre) in Los Angeles.  Hosted (and Nominee) by Funnyman Seth McFarlane, there were several moments of biting humour where he  drew “ooh”s, followed by “hahahaha”s, including everything from  jokes about Chris Brown and Rihanna to nine-year-old Nominee Quvenzhané Wallis, whom he said “in 15 years will be of age to date George Clooney“.  The highlight of his Opening Speech  included dancing by Charlize Theron and Channing Tatum and a cynical William Shatner, where we saw a hilarious Sock Puppet Re-enactment of Best Picture Nominee Flight. In addition, the sometimes Crooner showed-off  his singing chops including an inappropriate Duet with Kristin Chenoweth as the credits rolled, poking fun at the Losers.

Winning top honours tonight was Ben Affleck-directed Argo, which solidified its place in the race for Best Picture with a gain in momentum of late, with wins at major Oscars pre-cursor ceremonies including  the Critics’ Choice Awards, Golden Globe Awards and Directors Guide Awards. The Film also won Editing and Adapted Screenplay earlier in the evening and despite noticeably being left-out  in the Directing race this year, a fast-talking Affleck sorta addressed his snubbing by saying, “You can’t hold grudges and it doesn’t matter how you get knocked down in life as all that matters is that you  get up.”. The Drama had the distinction of debuting here at the Toronto International Film Festival this past September, when we were lucky enough to see Affleck and the Cast here in the City.

It should come as no surprise to many that Daniel Day-Lewis went on to win his third  Oscar for Best Actor for his portrayal of Abraham Lincoln in Best Picture Contender, Lincoln.  The private British-Irish Actor in 1989 won for My Left Foot and also in 2007 for There Will Be Blood.  In his Acceptance Speech, he showed his funny side, joking “Steven (Spielberg) originally wanted to cast Meryl (Streep) in the role of Lincoln“, accepting his Award from a fellow three-time Winner in Streep, acknowledging what a versatile Actress she is.

Winning Best Actress was 22-year-old Jennifer Lawrence, who looked stunning in her Dress designed by Dior Haute Couture, winning for her work in Rom-Com, Silver Linings Playbook.  Tripping up the stairs while accepting her Award, she humbly said “You’re all standing just because you felt bad I fell down”.  Lawrence became the second youngest Actress ever to win the Award, behind only a then 21-year-old Marlee Matlin in Children of a Lesser God.  The Category was seen as a hotly-contested battle between her and Jessica Chastain for Zero Dark Thirty.

Christoph Waltz repeated his 2010 feat, winning Best Supporting Actor once again for his second collaboration with Quentin Tarantino, Django Unchained.  The Austrian Actor  has solidified his standing  in North America as a Star with a hosting gig on Saturday Night Live just last week, completing his Awards Season sweep which also included wins at the Golden Globe Awards and also the BAFTAs.

Anne Hathaway, being the odds-on favourite to win Best Supporting Actress also was absolutely no surprise winning  her respective Category on the strength of her heartbreaking performance as Fantine in Tom Hooper‘s Les Misérables. Dressed in Prada – a decision she only made three hours prior to walking the Red Carpet which was met with mixed reviews – the New York Native has won an astonishing  43 wins  this Awards Season, with handful more to go still.

Taiwan-born Director Ang Lee became a two-time winner in the  Directing Category with his Life of Pi, after winning in 2005 with Brokeback Mountain.  Quentin Tarantino also won his second Oscar – his first being in1995 with Pulp Fiction – for his Screenplay, Django Unchained, although he  noticeably was omitted from consideration in the Directing Category.

After much buzz surrounding her appearance tonight which prevented her from appearing at the BRIT Awards the other night, International Singing Sensation Adele performed a stirring rendition of  Skyfall, co-written by her and Paul Epworth, which went on to win her an Oscar tonight for Best Original Song.   Adele among others, beat-out Host MacFarlane‘s co-written Everybody Needs a Best Friend, sung by Norah Jones, from Ted.

See some of the stunning Fashion from the Oscars tonight, including my fave look – Amanda Seyfried in Alexander McQueen! 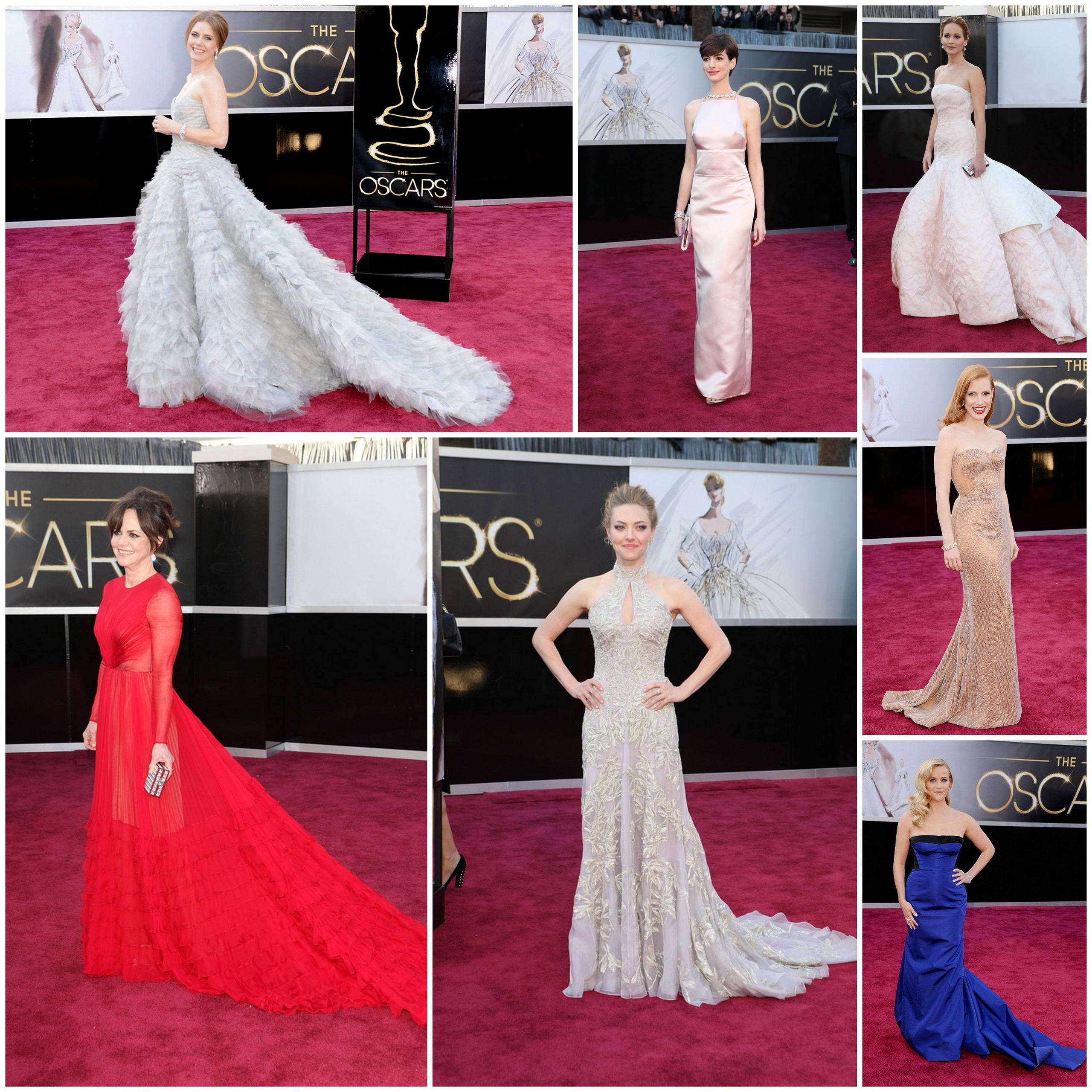