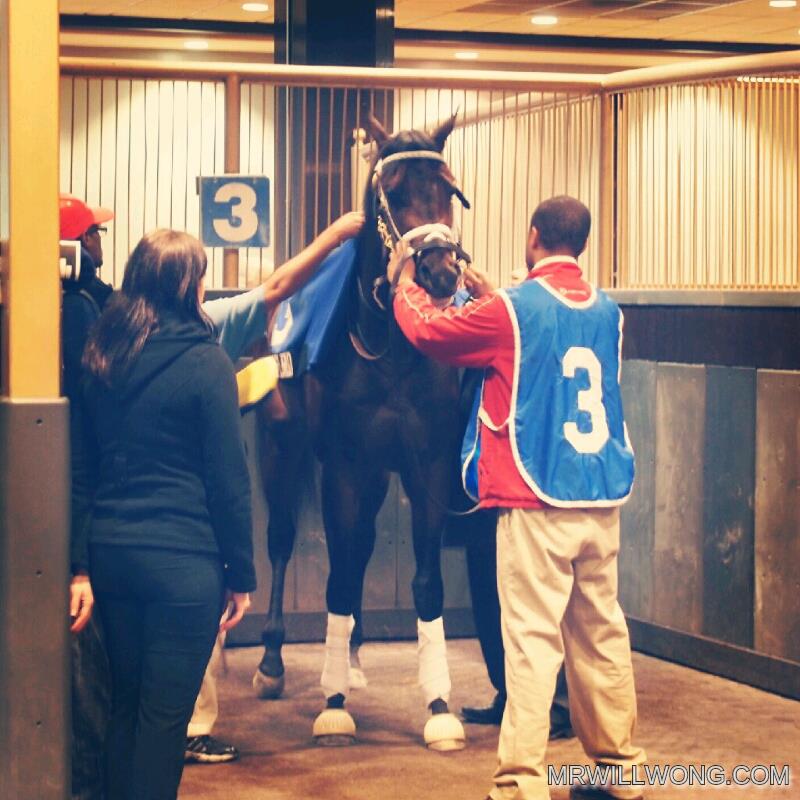 Perhaps one of the greatest Colts to come out of Canada in years, Uncaptured already has stamped himself a Shoe-in as Canada’s top two-year-old Colt at the forthcoming Sovereign Awards, honouring Canada’s Finest in Thoroughbred Racing.  Originally named the Winterbook Favourite to win next year’s Kentucky Derby –  a rarity for a Canadian-bred Horse – Uncaptured left many in doubt after a sub-par effort at Woodbine Racetrack in the Grey Stakes back in October, finishing a dismal fifth as the heavy Favourite.  Many wondered whether his best was simply behind him after winning his first four races in-a-row, or perhaps he simply was only a Sprinter?

Shipped-off to Kentucky late October, the Colt won the Iroquois Stakes at Churchill Downs easily and bettered that with a valiant effort today against even tougher company in the 1 1/16 miles Kentucky Jockey Club Cup Stakes, a Grade II Affair.  On paper he may have won by just a neck, but it was the persistence he showed never letting second-place Finisher Frac Daddy, pass him which was most impressive to watch.

With today’s win, Uncaptured has banked over $510k in just seven starts, stamping himself a Top Contender for next year’s Kentucky Derby. In the v. least, he’s proven now on Churchill Down‘s Dirt Course, but still the question for many is whether or not he can handle an even longer distance after barely hanging-on today. Of course he will face some stuff competition with undefeated and probable U.S. Champion two-year-old Colt Shanghai Bobby also pointed towards the Run for the Roses that first weekend in May 2013.  Bobby comes off a win in the $2-million Grey Goose Breeders’ Cup Juvenile which he won by just a head earlier this month. A lot can happen over the Winter and at any point a new Superstar could emerge as quick as that famous two-minute Derby is run.

Nonetheless, Canadians couldn’t be prouder.  It has been 29 years since a Canadian-bred has won the Derby and this is our greatest hope.  Is Uncaptured the greatest Canadian Colt since the legendary Northern Dancer?