As long as I can remember, I’ve always wanted a horse. As many of you know, my childhood was anything but ordinary. While most kids hung-out at the mall, played video games or road hockey on weekends, I spent my youth at the races with my parents. I’d doodle fantasy stables of horses on scrap paper, complete with imagined offspring of hypothetical matings of my favourites. I came home smelling of the ink on racing programs and forms, cigarette smoke and horses.

You can imagine the shock my Keyboarding teacher experienced when he perused my 5″ floppy disk looking to mark an assignment he gave us, instead finding a Microsoft Word document compiling stakes winners at Woodbine. I failed Keyboarding eventually, quite possibly the easiest course in High School. What I did succeed in was finding a life-long passion that would follow me into adulthood – even after a period where I followed Horse Racing from a distance during my University years.

I had Mr. Van Ryn for Grade 12 Marketing once again and as much as he had a negative impression of me, I proved him wrong, stepping up my scholastic game with a 95% grade. He still didn’t grant me the Marketing Award upon graduation despite having the top mark in the class. Haters gonna hate. Enjoy your trophy, Renee Yeung.

These past few years have been a bit of a whirlwind ride. Never in a million years as a kid who cheered from the grandstand at Woodbine Racetrack, would I have guessed that I’d ever have a place in the Horse Racing community locally. The issue of the industry being tasked with making itself sustainable very much is in public thought throughout the province.

In many ways, the sport is like a childhood friend to me. A friend who needs a bit of help and support right now.  How I know that this friendship is a lasting one is that I am happy to do what I can for it without any sense of hesitation or seeking of credit. I am grateful for the racing community and their warm embrace. There isn’t a day that I visit Woodbine and don’t get a friendly smile or a “Hi, Mr. Will!“.

On October 9th last year, I woke up to a text message from Keith McCalmont, a dear friend who has done so much of the sport from the Media offices of Woodbine and also under his online identity, Triple Dead Heat. This text though was odd and maybe even foreshadowing.

Okay @tripledeadheat, you and your dreams better not be sh*ttin’ me!! Let’s go, big money!! Daddy wants a pony!! #lotto #Willionaire #649 🐎💵

Sure enough I played the 649, needless to say without much success. But this is where the story takes a bit of a turn. A few weeks later I received a message from Cathy Wong (no relation) partner of veteran Owner/Trainer John Ross. I have been following Ross’ career for several years and anyone who follows the sport knows that he has an eye for talent. Top caliber athletes like Brooklynsway, King Corrie, Go Greeley and eventual Horse of the Year Lexie Lou all at one point in their successful careers were under his tutelage.

“I hope you don’t mind”, the message said, attached with it a name registration certificate for a filly they had bought at the Canadian Thoroughbred Horse Society Sale in September. I glanced over at the name, which read A PIC BY MRWILL. Did I mind?  DID I  MIND?!??!

Is this a dream?! Incredibly-honoured John Ross & Cathy Wong named their new filly after me! Look out in 2016 for “A PIC BY MRWILL” a two-year-old filly by Kentucky Bear x Princess G, by Cee’s Tizzy! Lotsa speed on her dad’s side and a lot of class on her mom’s side, including champion “Bear Now”. This is where things get a little spooky. Look at the registration date here, 10/9 and scroll down my timeline. That same day you will see I randomly got a text from my friend @tripledeadheat that he dreamt I bought a horse. Close! So uncanny right? So much respect for John, the man who developed champions King Corrie, #LexieLou and the top-performing #Brooklynsway. Sending this dark beauty love and luck as she becomes a racehorse this winter! Can’t wait to meet her! 🐎 #Filly #HorseRacing #Horse #GetintheGame #Yearling #Coincidence #Luck #Woodbine

Quite literally I sat in front of my phone, jaw dropped and unsure who to express my excitement to. I told my unphased Mom and all she cared about was what it would cost. Asian parents. My friends enjoy Woodbine when I bring them, but how many of them got how big a deal this was?

What makes this all the more cosmic is that Keith‘s dream-text came to me on October 9th – the exact same day A PIC BY MRWILL was registered. How is this even possible?

As often is the case, I jinx myself by being overly-passionate about things. I was dying to meet this filly and in my head I conjured-up how our first meeting would go. Would she love me back? Would she bite me (she would! see video below!)? What if she wanted nothing to do with me? I decided to let things flow naturally, remaining non-intrusive. Cathy would keep me posted with tidbits over Facebook, which I would cherish and savour quietly. We nicknamed her Princess, which I was painfully eager to use on her.  “Come, Princess!!  Another miniature carrot Princess?!”.

The backstretch has opened once again for training at Woodbine, where A PIC BY MRWILL will be based. Although trucks could be seen pulling-in and unloading horses, it generally still is rather sparse and quiet back there.

I made it a mission to see my girl at long last in a hectic week leading-up to my Hollywood visit Thursday. Ford Canada as always was generous and supportive, giving me a chance to test drive the Ford Escape.  There literally is no other way I would have been able to make the early Sunday commute without the Escape.

I pulled-out all the stops. I had Scotch Mints, Carrots (thanks Julie!) and a Teddy Bear – all fail-proof ways to make a horse warm-up to you. I had gotten there just as A PIC BY MRWILL was set to do her first ever gallop on Woodbine‘s Training Track after vanning-in only yesterday morning.

Like a hot mess, I walked through the  John Ross  barn pacing from stall to stall. “Is this her?… Is this her? … Is this her?”, I’d ask as I passed each one. After about five failed guesses, I finally landed on the correct one. Princess was busy getting tacked-up, her hind end in plain view. The wait to see her was becoming a bit agonizing. Moments later I saw Ricky, one of John‘s long-time assistants, come out with her.  Princess stopped quickly and I gave her a welcome hug, which thankfully was returned with a nudge back. Such relief.

Sporting a bit of a thick winter coat, there was no denying her beauty. Her father is promising Ontario sire Kentucky Bear, once a Kentucky Derby contender. Her mom Princess G is a half-sister to Canadian champ Bear Now.  She also is related to Lexie Lou through her maternal side via popular stallion In Excess. Although not a flashy seven-figure-worth breeding, there is plenty of depth. Despite being only two (a baby still by racing standards), her conformation was outstanding. Her legs give every indication she will grow to be rather tall and I could tell from her hind end she is strong. One thing I noticed on Princess was a couple minor scars, but I didn’t think much of it.

“I have something to tell you, but don’t know if I should”, Cathy told me. My curiosity was piqued, but the timing didn’t seem right at that moment to probe. Was she being sold? What could it have been?

Moments later John walked alongside me, revealing a bit of heartbreaking news about Princess. I learned that after a prolonged fight with a serious sinus infection this winter, requiring multiple emergency visits to the equine hospital, we could well have lost her. My heart broke as I learned about her being connected to an IV, drainage pipes pierced right through her. How is it possible a horse this young already has had to endure this much suffering?

What makes this story even more remarkable is that back in 2006 I also underwent a major health struggle, battling Thyroid Cancer. This too saw me sporting a drainage pipe through my neck and although with Princess, we’ve put the worst parts behind us, together we are bonded not only in name, but also the same battle scars.

John tells me, “I see something in her and as corny as it sounds, seeing how she connected with you for the first time today confirms that”. He never stopped believing in Princess when the situation could have gone awry and this together with her sheer determination to survive and the medical expertise of Milton Equine Hospital, already has Princess winning a major victory even before having won a race.

Knowing this, seeing A PIC BY MRWILL surge to the lead under exercise rider Katy Morrison (who calls her “A filly named Willy“)  in her gallop this morning – never letting her workmate pass her – only punctuated the flurry of emotions going through me.

Without further a do, I introduce you to A PIC BY MRWILL.

Katy Morrison + A Pic By MrWill 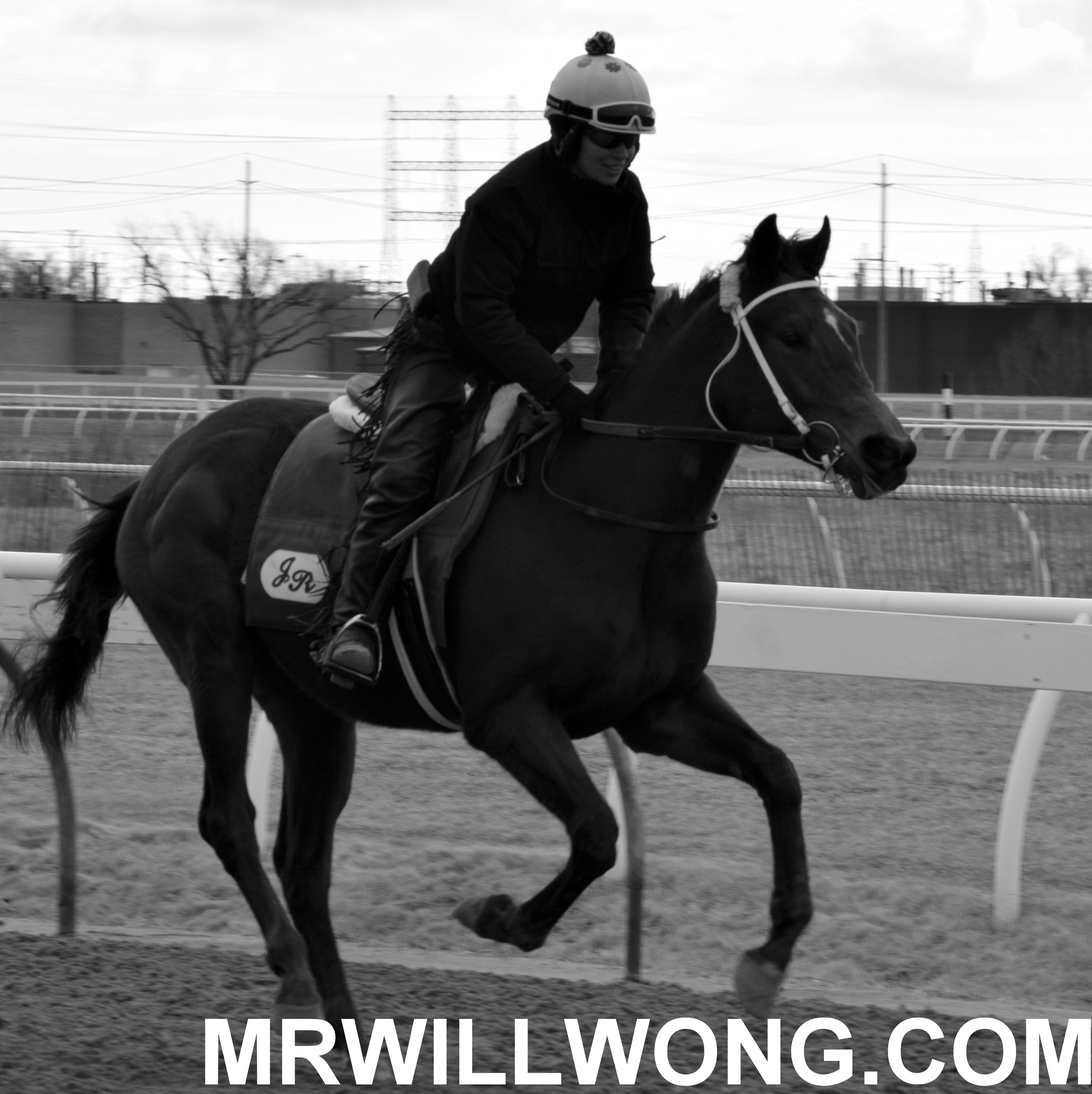 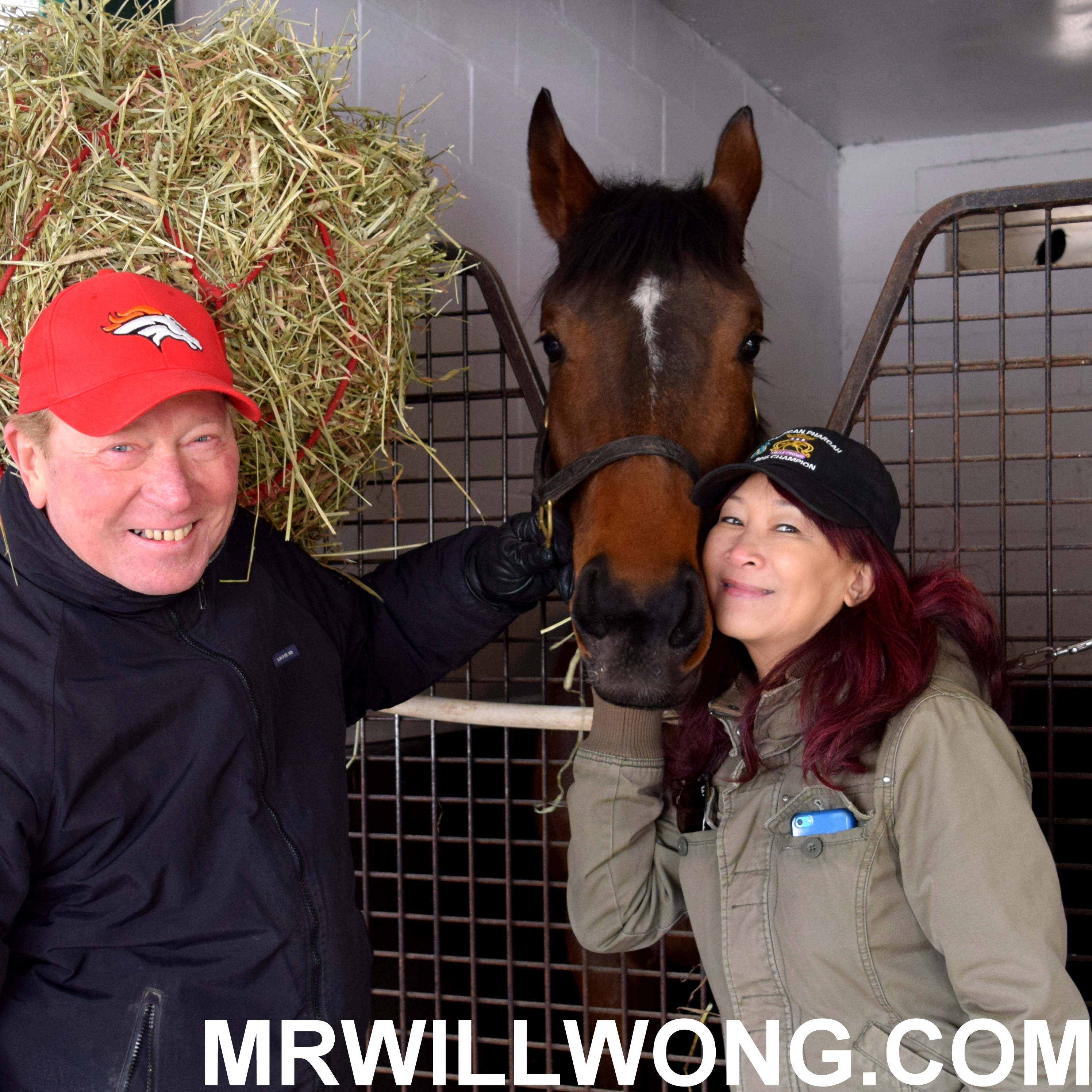 A Pic By MrWill + Ricky 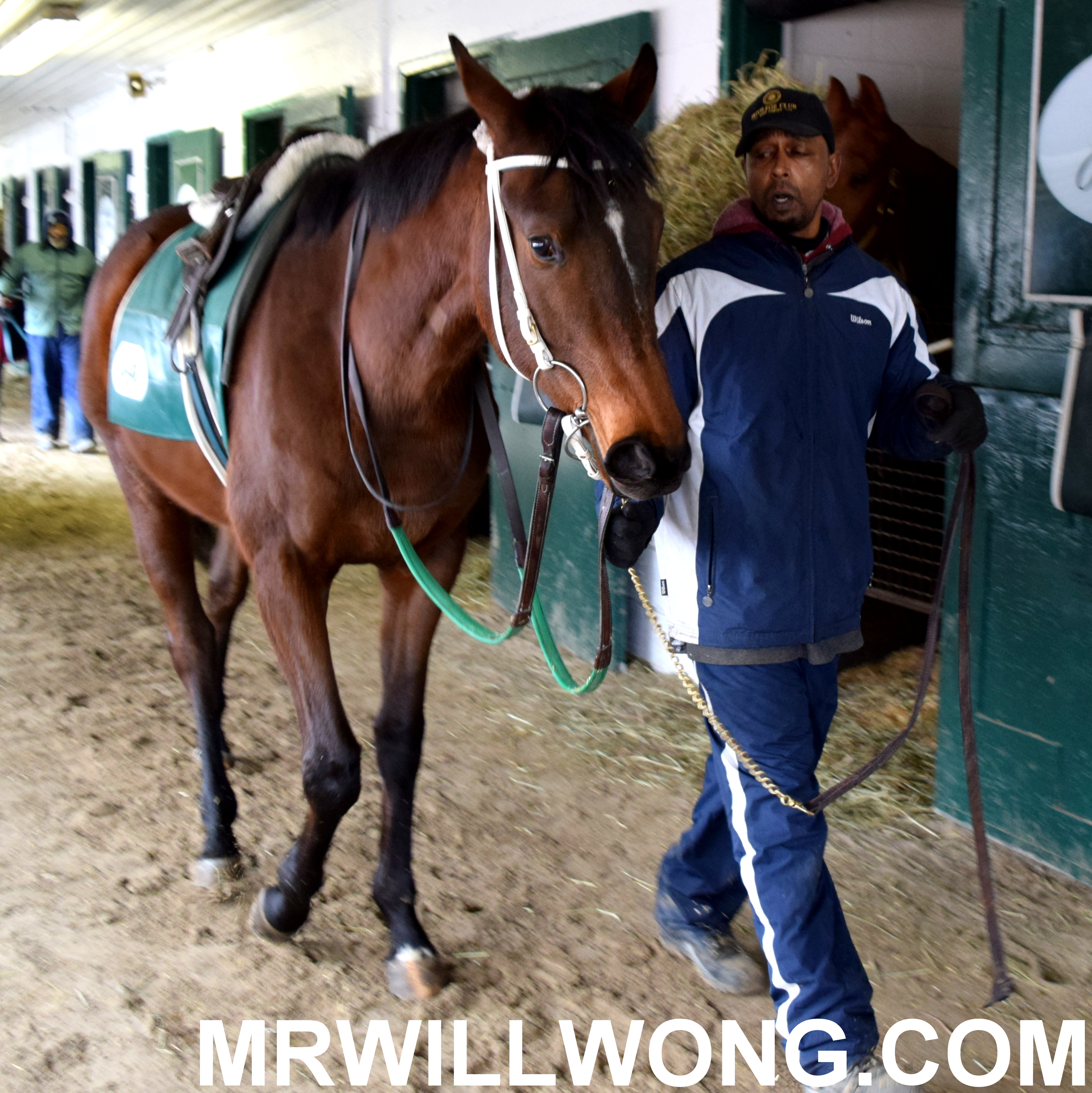 A Pic By MrWill (feeding time!) 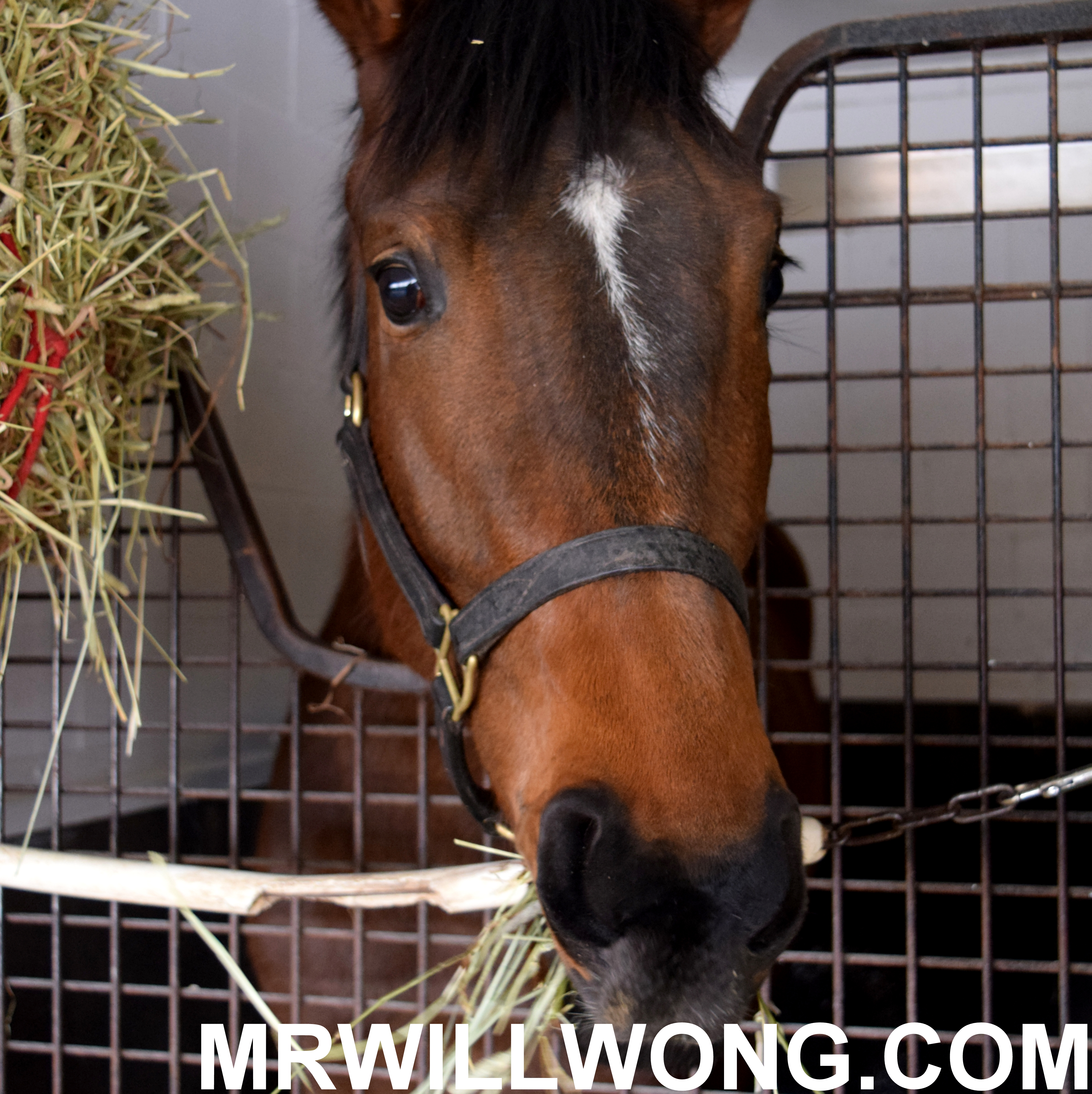 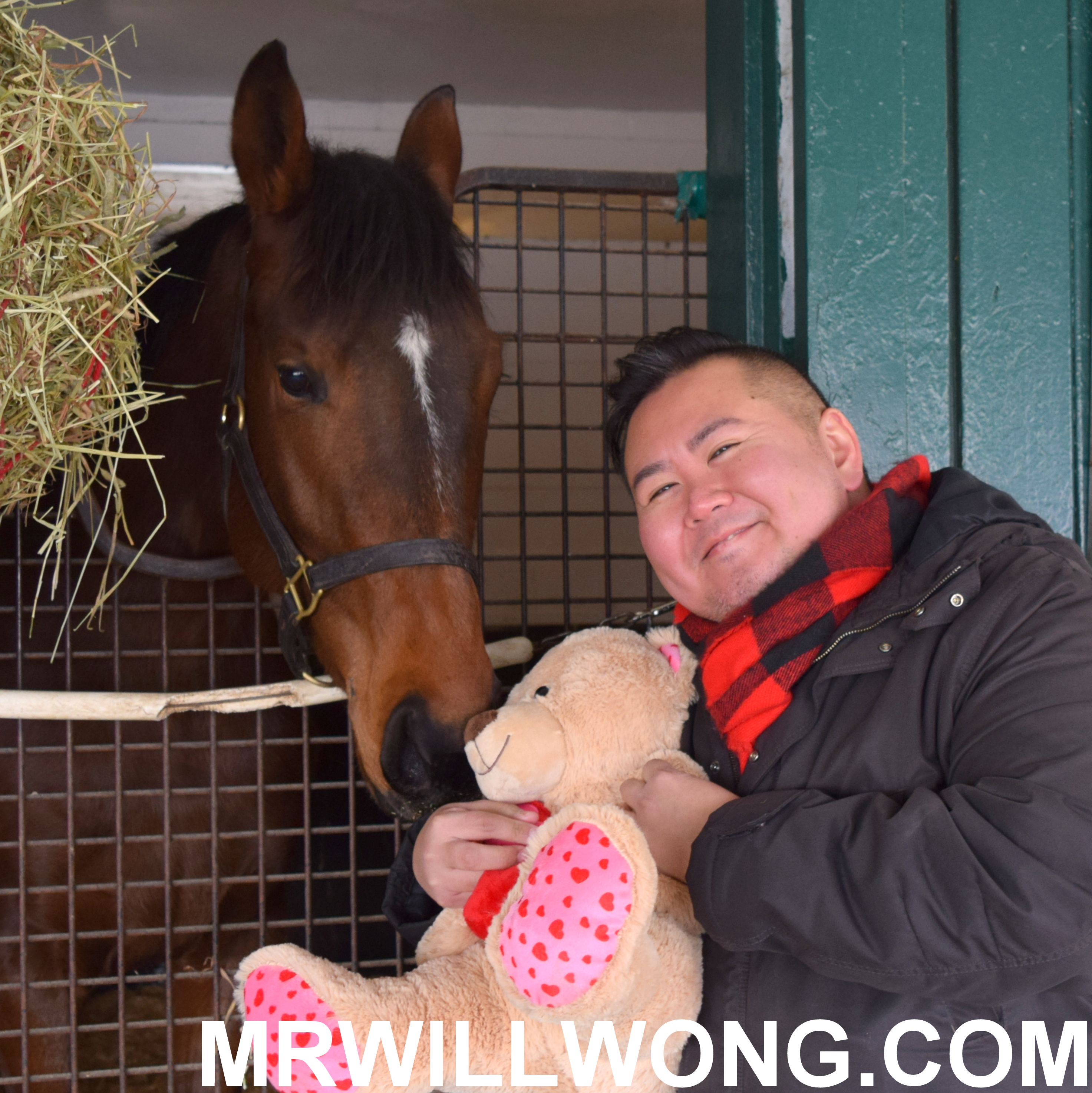 A wink from Princess! 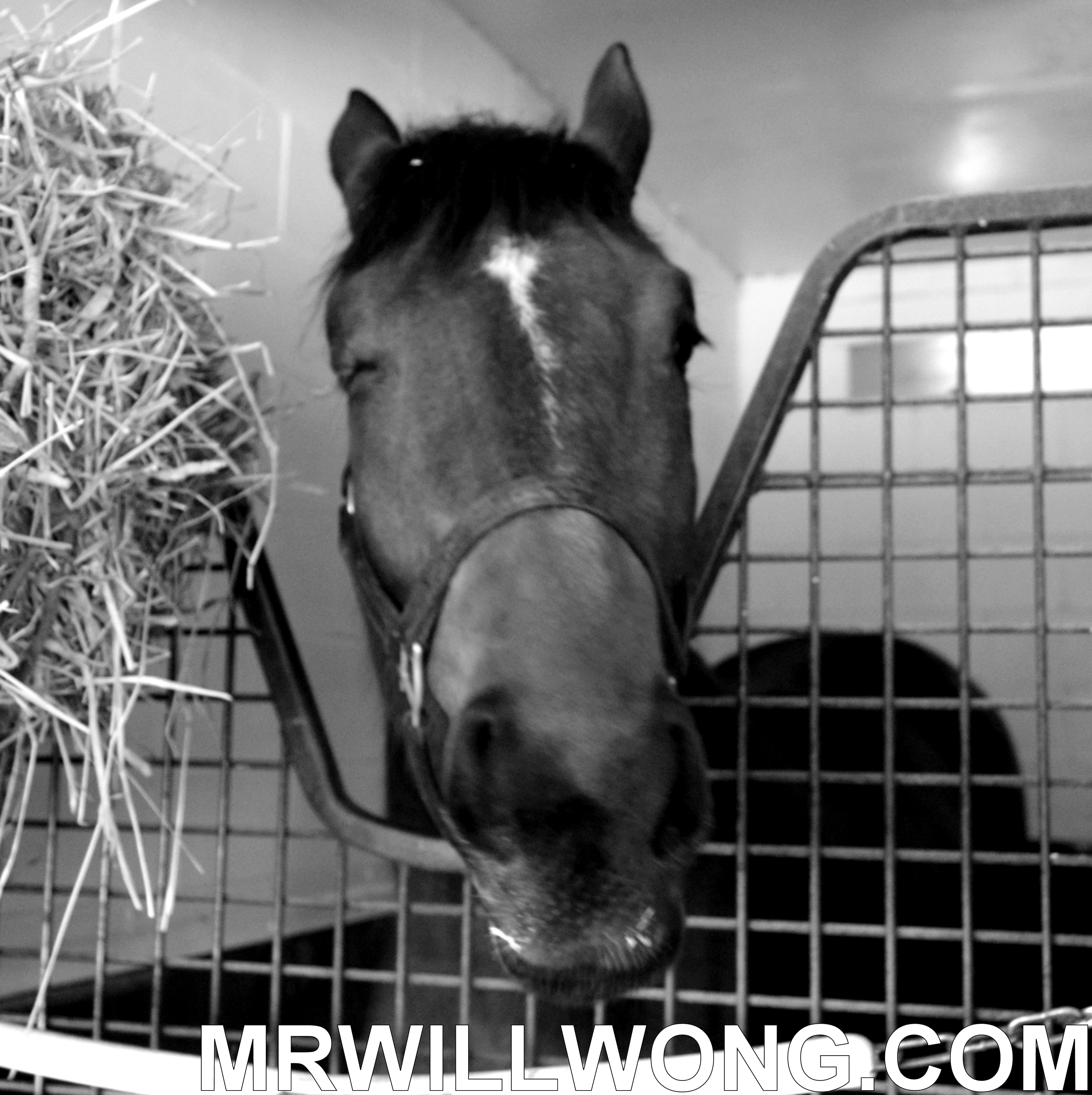 See A PIC BY MRWILL in video:

Will you be making it out to cheer for Princess when she debuts later this year?