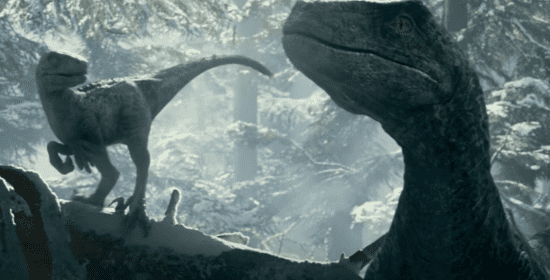 JURASSIC WORLD DOMINION for a second straight week demolishes the competition. In its second weekend, it pulls-in $66.2 million, a total $257.3 million from 4,697 theatres for Universal Pictures.

LIGHTYEAR which was expected to take the crown in its debut brightens up the Box Office settles for #2 at $55 million from 4,255 theatres for Disney, This origins story for the hero who inspired the Toy Story character and voiced by Chris Evans, gets 78% on the Tomatometer. Though not a a part of the Toy Story franchise, by comparison 2019’s Toy Story 4 opened with $120 million in North America.

TOP GUN: MAVERICK still is in-flight with $46.5 million from 4,035 theatres for Paramount Pictures, taking it to $468 million in its domestic run.

DOCTOR STRANGE IN THE MULTIVERSE OF MADNESS is in fourth with $3.8 million for Disney, a total $404 million grossed to date.

Fifth spot goes to THE BAD GUYS with $4 million in its eighth weekend for Universal Pictures.