#TIFF12: HIGHLIGHTS OF THE FESTIVAL BY MR. WILL 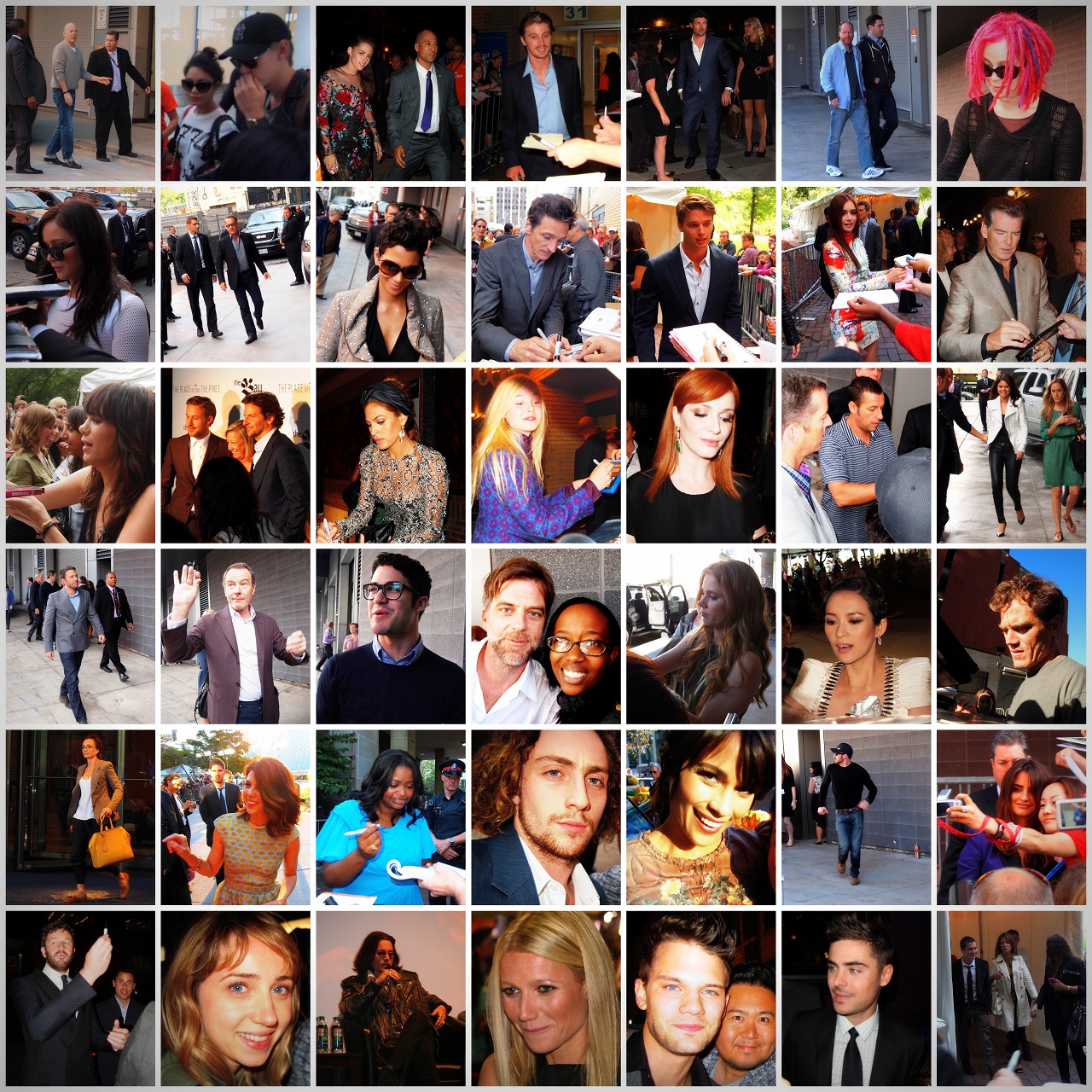 1. Bruce Willis actually signing an Autograph for once – Press Conference for Looper.  Believe me, he rarely does it!  His younger Co-Star Joseph Gordon-Levitt certainly could learn a lesson or two from that, getting booed after turning-down Fans yet again.

3. Kristen Stewart at the On the Road Premiere. Smiling!  A great regret of mine for not bothering to queue toe Red Carpet for her as she was extremely generous with Fans that day.

4. Garrett Hedlund is a star on the rise; he is seen here at On the Road Premiere.

5. Karl Urban at the Premiere for Dredd 3-D.  Is he perhaps Action Cinema’s most underrated Actor?

6. Joss Whedon walking to TIFF Bell Lightbox for some Photos.  Several Fanboys and Fangirls got their biggest wish come true meeting the Director as he walked to and from Ritz-Carlton Hotel.

7. Lana Wachowski debuts herself as a Woman at the Cloud Atlas Press Conference. Yes, you know who she is. Think: The Matrix.

8. Jennifer Lawrence at the Press Conference for Silver Linings Playbook. Easily the Festival’s biggest “It Girl”. Few got their Photos with her, but The Hunger Games Star did her best to sign every Autograph she could.

9. Tom Hanks at Cloud Atlas Press Conference. That is all.

10. Halle Berry being gracious to Fans working her way into ever corner of the queue, signing Autographs at Cloud Atlas Press Conference. I am floored by her beauty and kindness.

11. John Hawkes at the Premiere for The Sessions, for which he is gaining a tremendous amount of Oscar buzz with.  He declined me a Photo but still was nice about it, as he was rushed off into his vehicle.

12. Patrick Schwarzenegger at the Premiere for his first Film, The Writers.  Yes, I met a Schwarzenegger!!  Was Arnold even this handsome at his age?

13. Lily Collins at the Premiere for The Writers. Love her Balmain Dress; favourite Dress at TIFF 2012 – no doubt.

14. Pierce Brosnan at the Premiere for Love Is All You Need. As classy and kind as you’d imagine.

15. Kristen Wiig at the Premiere for Imogene.  Incredibly gracious on the Carpet, but don’t bug her when she’s not working.  My #1 Person to Meet at TIFF 2012 and it happened! And it was epic! Hilarious seeing myself shouting for her on the Carpet later that day on the news!!

16. Bradley Cooper and Ryan Gosling together in one Photo.  How can one .jpg contain that much hotness?  Photo taken at Party for The Place Beyond the Pines where Gosling was spotted bringing his Mom, Donna. Aww!

17. Eva Mendes at the Party for The Place Beyond the Pines. Whatever Ryan Gosling has done to her,  she needs to keep doing as she was in great spirits that night. Mendes was incredibly friendly to Fans this year and she has never looked more glamorous doing it. I want to squeal every time I look at my Photo with her.

18. Elle Fanning at the Premiere for Ginger & Rosa. Stunning and sweet young Lady who happens to be the little Sister of Dakota.  She is said to have been v. emotional after seeing Film for the first time and apparently cried on-stage during the Q&A.

19. Christina Hendricks at the Premiere for Ginger & Rosa. Stunning.  Just absolutely stunning.  The Mad Men Star declined Photos that night, but after a bit of persistence she did it and I will never forget!  Thanks to Friend and Reader Laura for snapping this!

20. Adam Sandler at the Press Conference for Hotel Transylvania being  awesome with Fans surprisingly. You just can never tell with Comedians.  He’s always been a favourite of mine and I’d never have guessed I’d have gotten a Photo with him!

21. Selena Gomez at the Press Conference for Hotel Transylvania. I have never heard so much shrieking. Ever.

22. Ben Affleck at the Press Conference for Argo, which although got mixed reviews at Venice Film Festival, was loved by many in Toronto. A great Guy who is equally talented as a Director as he is an Actor and wonderful to his Fans. He definitely is one of my greatest highlights of TIFF 2012.

23. Bryan Cranston at the Press Conference for Argo. A true Gentleman who hopefully will come back to film in Toronto again and be welcomed with open arms as he’s just an amazing Guy!

24. Darren Criss at a Photo Call for Imogene.  Some Glee Fans had great experiences with him, some not so much especially after arriving so late to the Premiere for the Film that he had little time for Fans.

25. Paul Thomas Anderson at the Press Conference for The Master – the one Film which already is being touted as a clear favourite to win Best Picture this year.

26. Amy Adams at the Press Conference for The Master. They don’t come much nicer than her. One of my fondest memories of TIFF 2012 was meeting her. One of America’s greatest Actresses and believe me, I’ve waited year after year for her to come.

28. Michael Shannon at the Press Conference for The Iceman; a bona fide Actor’s Actor on the verge of an Oscar whether it be this year or another year. Incredibly humble and generous with Fans, taking the time to fulfill every request thrown his way that day.

29. Kristin Scott Thomas leaving her Hotel after promoting No. Brilliant Actress, who is every bit as classy and kind as you’d imagine.  Will she ever age?!

30. Marisa Tomei at Red Carpet for Inescapable at Roy Thomson Hall.  Tomei was in great spirits at the Carpet, signing many Autographs and believe it or not, doing some Photos with Fans. I even got one (minus the fact that she moved quickly after posing!).  A rarity for the Oscar-winning Actress!

31. Octavia Spencer at Red Carpet for Smashed. Charismatic Actress who although vocal with Fans and generous with Autographs at Ryerson Theatre, was photo-shy, declining Photos with Fans leaving them disappointed as she entered the venue.

32. Aaron Johnson at Premiere for Anna Karenina.  Unquestionably talented Actor who is on the verge of becoming Hollywood’s next It Boy. Currently in Toronto filming Kick-Ass 2; lovely meeting his Wife, Sam Taylor-Wood who was a bit taken a back when I asked her for a Snap.

33. Paula Patton leaving her Hotel for Premiere of Disconnect. She was one of the sweetest Celebrities to have graced the City this Festival; extremely giving, friendly and just beautiful to the eye.

34. Chris Evans aka Captain America, at Press Conference for The Iceman.  The Hunk has catapulted to the top after much persistence and dedication. Although he typically doesn’t sign Autographs, Fans were delighted by his generosity that day.

35. Penelope Cruz at Press Conference for Twice Born. Always a thrill to see this brilliant Spanish Actress, who has left her mark in Hollywood with a string of Oscar-worthy performances.

36. Chris O’Dowd at Premiere for The Sapphires. The lovable Funnyman spent a good amount of time with Fans as his Premiere with cigarette in-mouth, while earlier Harvey Weinstein milled about in the background, going in and out of VISA Screening Room checking audience reactions.  One of the few Films which I saw an Audience give a standing ovation to outside the Theatre.

37. Zoe Kazan at the InStyle Magazine Party. You’ve definitely seen her before but just didn’t know her name. This humble and sweet Actress was spotted with her equally amazing Partner Paul Dano, taking Photos with several Fans.  Currently in-town filming The F Word opposite Daniel Radcliffe, it’s quite possible we’ll be seeing her on the Red Carpet herself at TIFF 2013! While most Actresses opted for fluffy frocks and slinky dresses, she kept it cool and casual.

38. Johnny Depp at Premiere for West of Memphis.  Although I physically wasn’t at this event, I did see Depp earlier in the day at the Press Conference for the Documentary, failing to fire a proper Snap of him as he hopped straight into his vehicle. He apparently was generous with Autographs upon arrival, although few who were persistent enough managed a Snap together with him. Thanks to my loyal Reader and Friend Sheetal for sending this in!

39. Gwyneth Paltrow at Premiere for Thanks for Sharing.  Fans who lined the Carpet at Ryerson Theatre were in awe how kind this Oscar-winning Actress was with Fans. It definitely was one of my biggest regrets of the Festival, just missing her both arriving and leaving, but thanks again to Sheetal, I have a beautiful Snap to show you.  Paltrow was in a great hurry to fly-out after walking the Red Carpet quickly.

40. Jeremy Irvine at the InStyle Magazine Party.  I adore this Irish-born Actor v. much after having seen him in War Horse – the one single Movie which made me cry so hard my face hurt, last year.  I’ll be the first to admit he’s a bit more reserved and quiet than I’d have imagined but still a great Guy. I also got to meet his younger Brother Toby, who is just breaking into Cinema appearing in Dickens Adaptation Great Expectations together. Thanks to my amazing Reader and Friend Nicole who generously sent this Snap over after my Camera failed to fire!

41. Zac Efron at Afterparty for The Paperboy.  One of the Films I am most excited to see this year is this latest effort from Precious Director, Lee Daniels. The number one question I received on Twitter this Festival definitely was “Do you have any idea where Zac is staying?”. Everywhere he went there was chaos as that was the case at his Afterparty at Bloke and Forth, with Fans crowding to meet him, resulting in him having to be escorted-in prematurely.

42. Logan Lerman at The Writers Premiere.  One of the biggest breakout Stars of TIFF 2012 is this Star of Percy Jackson. Praise has been universal for his other Film at the Festival, The Perks of Being a Wallflower, with Critics and Sir Paul McCartney singing the praises of the Novel Adaptation. He’s definitely an Oddball, but a good Guy.

It’s been an absolute blast making it through another TIFF together.  Thank you all for your encouragement, Re-Tweets and kind words. Can’t wait till next year already! *bow*