#BOXOFFICE: “THE LAST JEDI” IS FIRST IN HUGE OPENING WEEKEND

Surprise! Or not. STAR WARS: THE LAST JEDI opens with a huge bang for Disney, raking-in a superb $220 million from 4,232 theatres. Critics are loving this follow-up to 2015’s The Force Awakens with 93% on the Tomatometer and a resounding A CinemaScore from Audiences. It still however is unable to best the $247 million opening its Predecessor had.

Animated Feature FERDINAND is a distant second with $12.3 million from 3,621 theatres for 20th Century Fox. Starring John Cena, it gets 75% in the Tomatometer and an A CinemaScore.

In third is COCO with $9.2 million now in its fourth week out, surpassing the $150 million-mark domestically for Disney.

WONDER is in fourth with $5 million for eOne Films/Lionsgate Films. It has made a successful $108 million already over five weeks in North America.

DADDY’S HOME 2 is showing incredible longevity into the Holidays in sixth with $3.3 million for Paramount Pictures in its sixth week. It is just shy of $100 million.

In eighth is THE DISASTER ARTIST expanding to 1,010 theatres with $2.4 million for Elevation Pictures/A24 Films. It has made $12.7 million over three weeks.

LADY BIRD continues to capitalize off its Oscar buzz in tenth with $1.9 million from 947 theatres for Elevation Pictures/A24 Films.  It has made $25 million thus far.

#BOXOFFICE: “COCO” PICKS AT HEARTS OF MOVIEGOERS A THIRD WEEK

COCO remains atop the Box Office a third consecutive week for Disney with $19 million from 3,748 theatres. Thus far in its domestic run it has grossed a healthy $136 million over three weeks. Expect though for that reign to end next weekend with fellow Disney release STAR WARS: THE LAST JEDI with its eyes on the prize.

JUSTICE LEAGUE once again finds itself in second with $9.4 million, a total $211 million thus far over four weeks for Warner Bros.

WONDER is in third this weekend with $9.3 million for eOne Films/Lionsgate Films, just surpassing the $100 million-mark over four weeks.

TIFF ’17 selection THE DISASTER ARTIST expands beautifully to fourth this weekend at 840 theatres across North America for A24 Films/Elevation Pictures. It earns $6.4 million and a total $8 million over two weeks. It comes with strong word of mouth and a 94% on the Tomatometer.

LADY BIRD is in ninth with $3.5 million from 1,557 theatres for A24 Films/Elevation Pictures. It is up to $22 million now in its sixth week out.

JUST GETTING STARTED starring Rene Russo, Morgan Freeman and Tommy Lee Jones, rounds-out the Top Ten with $3.5 million from 2,161 theatres for Broad Green Pictures. It hasn’t yet opened in Canada. It gets a 10% on the Tomatometer and a C CinemaScore.

After a record-breaking opening in Mexico, Disney•Pixar‘s COCO is the choice of Moviegoers this U.S. Thanksgiving weekend with a $49 million opening from 3,987 theatres across North America. It earns a sensational A+ CinemaScore and a 96% on the Tomatometer. Can we call it an Oscar Contender?

Despite a smashing debut, Warner Bros.’ JUSTICE LEAGUE is unable to hang-on a second time. Still though it earns a great $40 million this weekend, a total $171 million grossed already over to weeks.
WONDER is in third with $22 million in its second week for Lionsgate Films/eOne Films. Thus far it has grossed $69 million domesticallly.
In fourth is THOR: RAGNAROK with $16.5 million in its fourth week out. In total it has made $277 million in these parts for Disney.
ROMAN J. ISRAEL, ESQ. expands to 1,648 theatres for Sony Pictures, landing it in ninth with $4.5 million. It gets 55% on the Tomatometer.
Oscar Contender THREE BILLBOARDS OUTSIDE EBBING, MISSOURI is in tenth spot with $4.3 million playing in 590 theatres for Fox Searchlight.
coco Justice League Roman Israel Esq thor THREE BILLBOARDS OUTSIDE EBBING MISSOURI Wonder

#BOXOFFICE: “JUSTICE” IS IN ANOTHER LEAGUE IN OPENING

It ain’t U.S. Thanksgiving yet but Warner Bros. must give thanks to a powerful opening for JUSTICE LEAGUE earning $96 million in its opening from 4,051 theatres – completely in another league than its competition. This latest DC Comics Adaptation gets a B+ CinemaScore from Audiences and 40% on the Tomatometer from Critics.

WONDER starring Canada’s Jacob Tremblay has a very wonderful opening in second with $28.3 million for eOne Films/Lionsgate Films. Audiences are smitten with an A+ CinemaScore and a strong 83% on the Tomatometer.

THOR: RAGNAROK slips to third in its third week with $20.3 million for Disney. Thus far it has made $245 million domestically.

MURDER ON THE ORIENT EXPRESS slips to fourth in its second week with $14.1 million for 20th Century Fox. In North America thus far it has grossed $52 million.

DADDY’S HOME 2 slips to fifth, also in its second week with $13.6 million for Paramount Pictures. It has made $49.4 million to date.

THE STAR earns $10.2 million from 2,837 theatres for Sony Pictures. It opened on Wednesday. The Nativity Story-centered Film gets 62% on the Tomatometer and an A CinemaScore.

LADY BIRD expands successfully to 238 theatres for A24 Films/Elevation Pictures with $2.4 million. Over three weeks it has made $4.6 million and has a perfect 100% CinemaScore.

THREE BILLBOARDS OUTSIDE EBBING, MISSOURI expands to 52 theatres this weekend and earns $1.1 million for Fox Searchlight. The Oscar Contender sits at 94% on the Tomatometer and has the distinction of winning the TIFF ’17 People’s Choice Award.

Based on the New York Times bestseller, WONDER tells the incredibly inspiring and heartwarming story of August Pullman.  Born with facial differences that, up until now, have prevented him from going to a mainstream school, Auggie becomes the most unlikely of heroes when he enters the local fifth grade.  As his family, his new classmates, and the larger community all struggle to discover their compassion and acceptance, Auggie‘s extraordinary journey will unite them all and prove you can’t blend in when you were born to stand out. 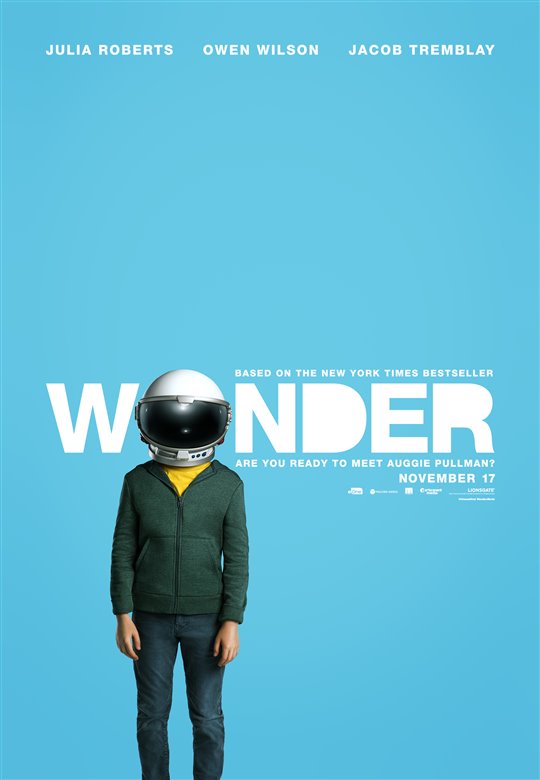 Right in time for Awards Season comes the release of the eagerly-awaited WONDER starring Mandy Patinkin, Owen Wilson, Julia Roberts and our v. own Jacob Tremblay!

Synopsis:
Based on the New York Times bestseller, WONDER tells the inspiring and heartwarming story of August Pullman. Born with facial differences that, up until now, have prevented him from going to a mainstream school, Auggie becomes the most unlikely of heroes when he enters the local fifth grade. As his family, his new classmates, and the larger community all struggle to find their compassion and acceptance, Auggie‘s extraordinary journey will unite them all and prove you can’t blend in when you were born to stand out.