STRONGER, a deeply personal account of the infamous 2013 Boston Marathon bombing and its aftermath film in which Jeff (Academy Award® nominee Jake Gyllenhaal) goes from being an ordinary working-class 27-year-old to a double amputee fighting for his life.  In the months following the blast, Jeff tackles intensive physical and emotional rehabilitation with the unwavering support of Erin and his family.  It is Jeff’s personal account of the heroic journey that tests a family’s bond, defines a community’s pride and inspires his inner courage to overcome devastating adversity. 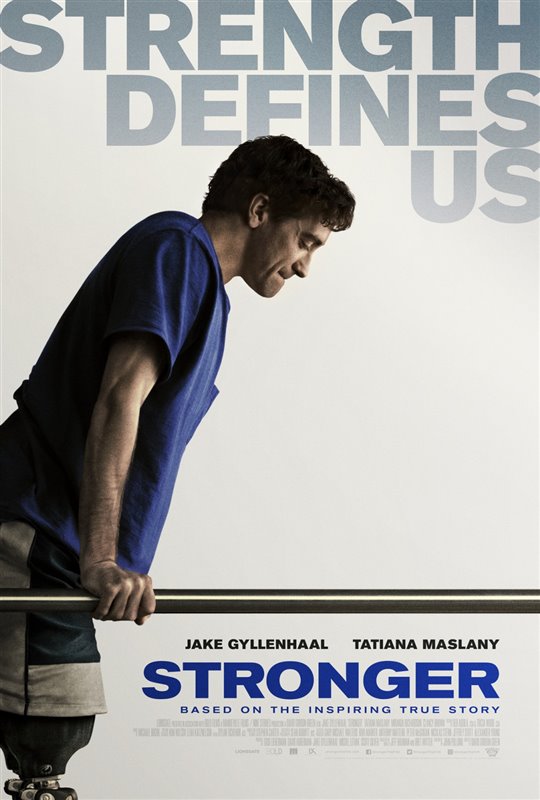 The Boston Marathon bombing of April 2013 impacted many people but perhaps few so drastically as Jeff Bauman. Director David Gordon Green’s latest effort Stronger, follows Bauman on his path toward recovery and redemption.

Hailing from the working-class suburb of Chelmsford, Jeff (Jake Gyllenhaal) was standing near the marathon’s finish line ready to cheer on his on-again/off-again girlfriend Erin (Canadian Tatiana Maslany). Moments before bombing he saw a young man in a baseball cap and looked him in the eyes. When Jeff awoke in hospital the next day he learned he had lost both his legs. His mother (played by Miranda Richardson) and guilt-ridden girlfriend try to help on the road to recovery as he wrestles with PTSD and the weight of the expectations thrust upon by a nation desperate for a hero.

In order to make the audience feel more connected with Bauman and his trauma, Green relies rather heavily on close-ups but this does not detract from the stellar performances, particularly from Maslany. Although formulaic, Stronger does its best to recreate the rather unlikable Bauman and paint him as a modern, if highly flawed, hero.

eOne Films will screen Stronger at TIFF ’17 at the following times: