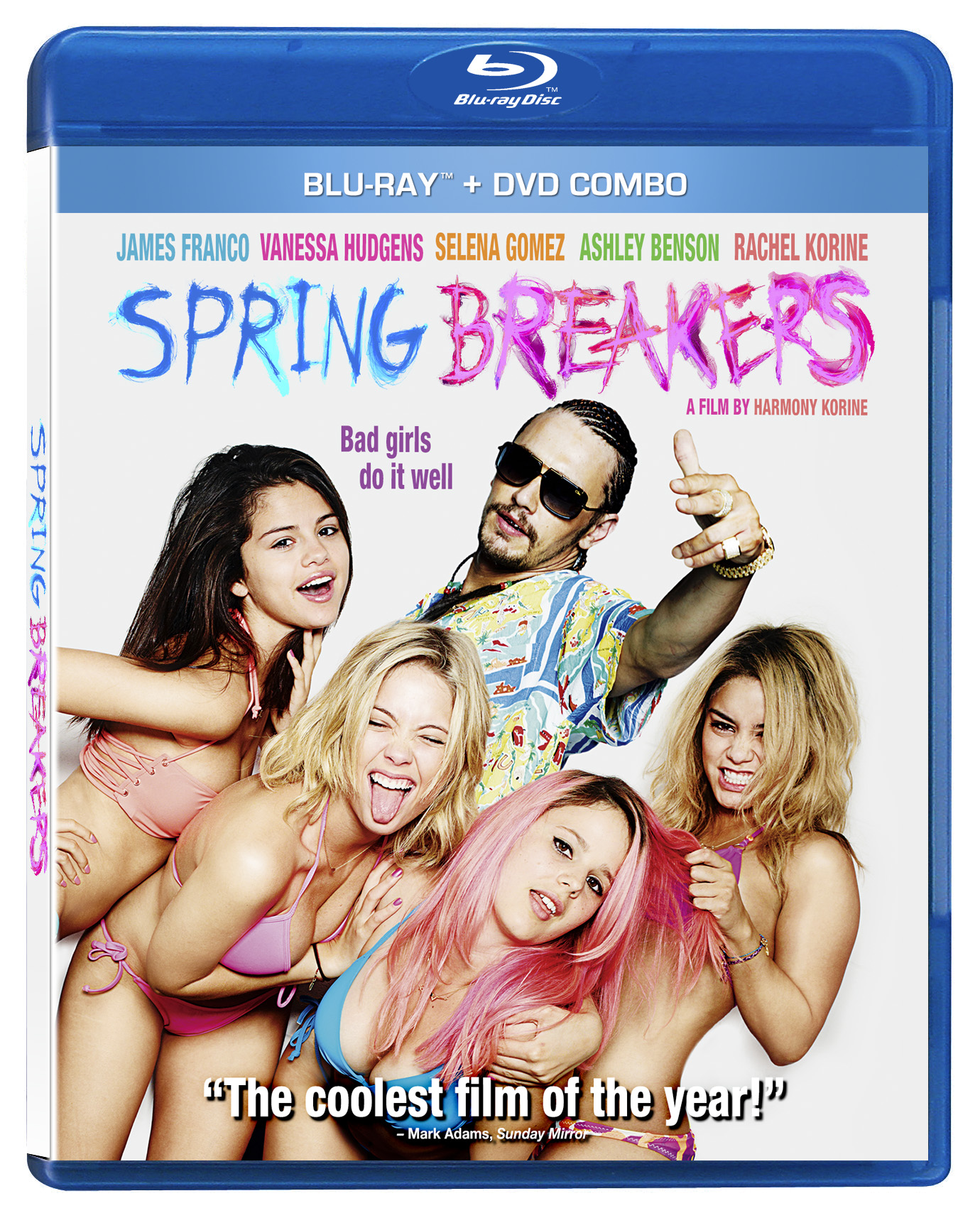 Boys rule the Box Office this Easter Weekend with G.I. Joe: Retaliation debuting big with a stellar $40.8 million across North America, from 3,719 theatres.  Critics panned the $135-million Blockbuster from Paramount Pictures, but Audiences reacted well with an A- CinemaScore.   This latest Installment in the Franchise stars Bruce Willis, Dwayne “The Rock” Johnson, Channing Tatum and Adrianne Palicki.

In second this weekend is last week’s Champ The Croods from 20th Century Fox with $26.6 million in its second week of release.  The Animated Feature takes advantage of the lack of Family-oriented Flicks out this weekend. To-date it has grossed an impressive $88.8 million in North America.

Tyler Perry’s Temptation: Confessions of a Marriage Counselor debuts in third this weekend from 2,047 theatres – yet another successful release from the Actor/Writer/Director/Producer and overall Magnate.  Earning $22.5 million, the Drama-Thriller stars Jurnee Smollett-Bell, Lance Gross, Kim Kardashian, Brandy Norwood and Vanessa Williams; it does not star Perry in male nor female form.  Critics didn’t love the Film, earning 17% at Rotten Tomatoes.

Olympus Has Fallen slips to fourth in its second week of release with $14.1 million after a solid debut last week in second spot, just ahead of former Champ Oz the Great and Powerful from Disney with $11.7 million in fifth.

The Host unfortunately didn’t translate to big numbers despite it being an Adaptation of beloved Twilight Author Stephanie Meyer‘s Novel of the same name. Reviews were outright vicious, tallying-in at 12% on Rotten Tomatoes. It debuts in sixth with $11 million for Open Road Films/eOne Films.

Well-reviewed Spring Breakers by Director/Writer Harmony Korine lands in ninth with its expansion to 1,379 theatres with $2.5 million.  To date it has earned $10 million and despite strong limited release numbers, this didn’t translate as strongly with its expansion.

The Incredible Burt Wonderstone in its third week of release, rounds out the Top Ten with $1.2 million.

#BOXOFFICE: “THE CROODS” DRIVES FAMILIES TO THE MOVIES THIS WEEKEND

Debuting atop the Box Office this weekend is The Croods from Dreamworks/20th Century Fox, earning $44 million from 4,046 theatres in North America. Earning positive reviews from Critics, tallying 64% on the Tomatometer at Rotten Tomatoes and even strong reviews from audiences with an A CinemaScore, the Animated Feature starring Ryan Reynolds, Nicolas Cage and Emma Stone was made for $135 million,  still yet to be released overseas.

In second and certainly not disgraced is Antoine Fuqua‘s Olympus Has Fallen opening with $30.8 million for FilmDistrict/VVS Films, from 3,098 theatres.  Overall, reviews have been mixed with it earning 55% over at Rotten Tomatoes, but audiences responded v. well, giving an A- CinemaScore. After multiple Box Office Misfires of late, Gerard Butler re-asserts his standing as a bankable Leading Man. The Film however was made for $70 million, which by Indie standards is astronomically high, but with positive buzz, this should translate into a bit of staying power in coming weeks and possibly its second run on Home Video.

Oz The Great and Powerful continues to be a major force, slipping to third but still garnering $20.8 million in its third week and should shortly surpass the $200 million mark domestically.

Meanwhile The Call, last weekend’s Runner-Up, earns $9.1 million in its second week of release, just ahead of Tina Fey and Paul Rudd-headlining Rom-Com Admission in fifth with $6.6 million for Focus Features/eOne Films.

Amazingly, Spring Breakers in Limited Release finds itself in sixth with $5 million from only 1,104 theatres and next weekend will see a release in select Canadian cities including Toronto.  Reviews are solid for the Harmony Korine Flick starring James Franco, Selena Gomez, Vanessa Hudgens and Ashley Benson.

Former Champion Identity Thief still is hanging tough for Universal Pictures with $2.6 million from 2,166 theatres, while Snitch rounds-out the Top Ten with $1.9 million.  Dwayne “The Rock” Johnson who stars in the latter, also will be making his presence felt with G.I. Joe: Retaliation, out next week.

#GIVEAWAY: ENTER TO WIN PASSES IN EDMONTON AND CALGARY TO SEE “SPRING BREAKERS”

Spring Brea-ea-eak.  Spring Break forever, B*tches!  Part-Arthouse, part-Teen Fantasy, Director/Writer Harmony Korine‘s Spring Breakers has been winning accolades since it debuted last September at the Toronto International Film Festival.  With an All-Star Cast which includes Selena Gomez, Ashley Benson, Vanessa Hudgens, Rachel Korine and of course, a blinged-out James Franco, I personally have witnessed its greatness and am so excited for you to discover the Film that Girls Creator Lena Dunham is raving about!

Here’s your chance Edmonton and Calgary to see Spring Breakers before everybody else!  VVS Films, Touchwood PR and Mr. Will Wong would like to give Readers a chance to see a special Advance Screening in both cities on Wednesday, March 27, 2013.

#BOXOFFICE: “OZ THE GREAT AND POWERFUL” ON-TOP A SECOND WEEK

And it’s Oz again!  Disney‘s Oz The Great and Powerful continues to crush the competition at the Box Office, this weekend earning $42.2 million, making it two weeks on-top.  To date, the Prequel to The Wizard of Oz has grossed $145.3 million domestically, taking only six days to surpass the magical $100 million mark.

Debuting at number two is Sony Pictures’ The Call starring Abigail Breslin and Halle Berry, earning $17.1 million from  2,507 theatres.  The Thriller, made for a paltry $13 million, already earns back its budget and favoured rather well with audiences, making the grade with a B+ over at CinemaScore. Critics however weren’t as nice, giving it 42% over at Rotten Tomatoes.

The Incredible Burt Wonderstone had the all-star Cast including Steve Carrell, Jim Carrey, Olivia Wilde and Steve Buscemi, but unfortunately debuts below expectations with $10.3 million from 3,160 theatres. The Comedy, a second film in the Top Ten about Magic, earned 39% according to Critics on the Tomatometer and Audiences didn’t love it either unfortunately with a C+ CinemaScore.

Former number one Flick Jack The Giant Slayer slips to fourth spot this weekend with $6.2 million in its third week, now having grossed $54 million in North America alone.  The resilient Identity Thief follows closely behind in fifth with $4.6 million.

Safe Haven amazingly still hangs onto the Top Ten in its fifth week sitting in ninth with $2.4 million, showing a void in Films catered to Female Audiences in recent weeks, while Canadian-produced Escape from Planet Earth rounds-out the Top Ten with $2.2 million. 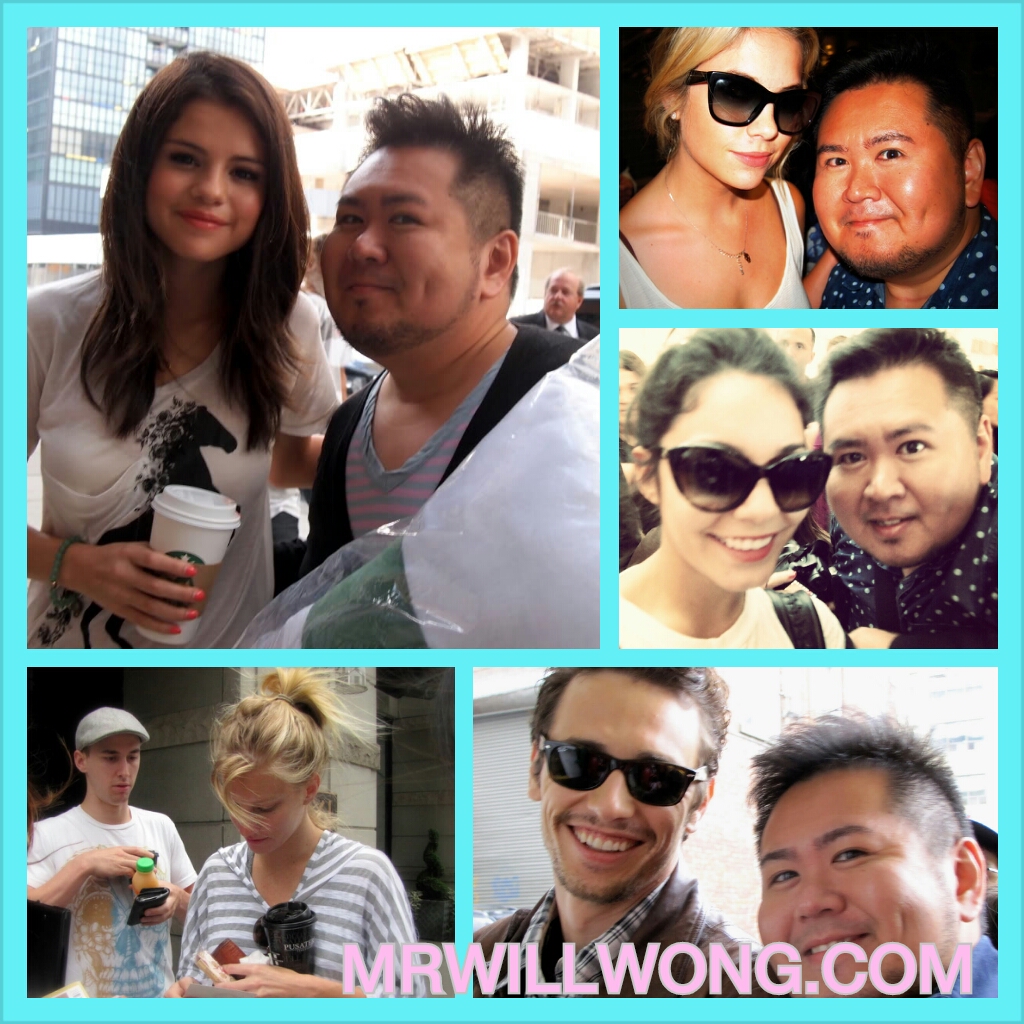 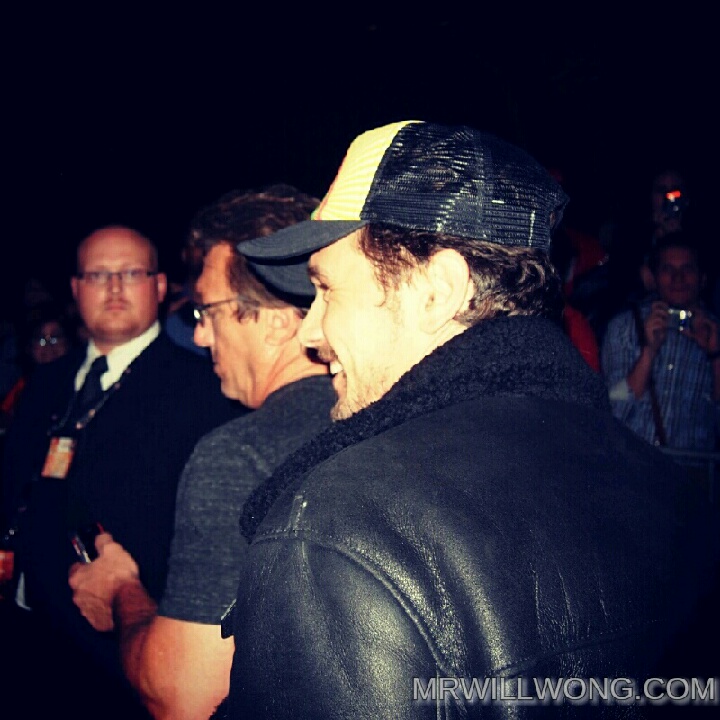 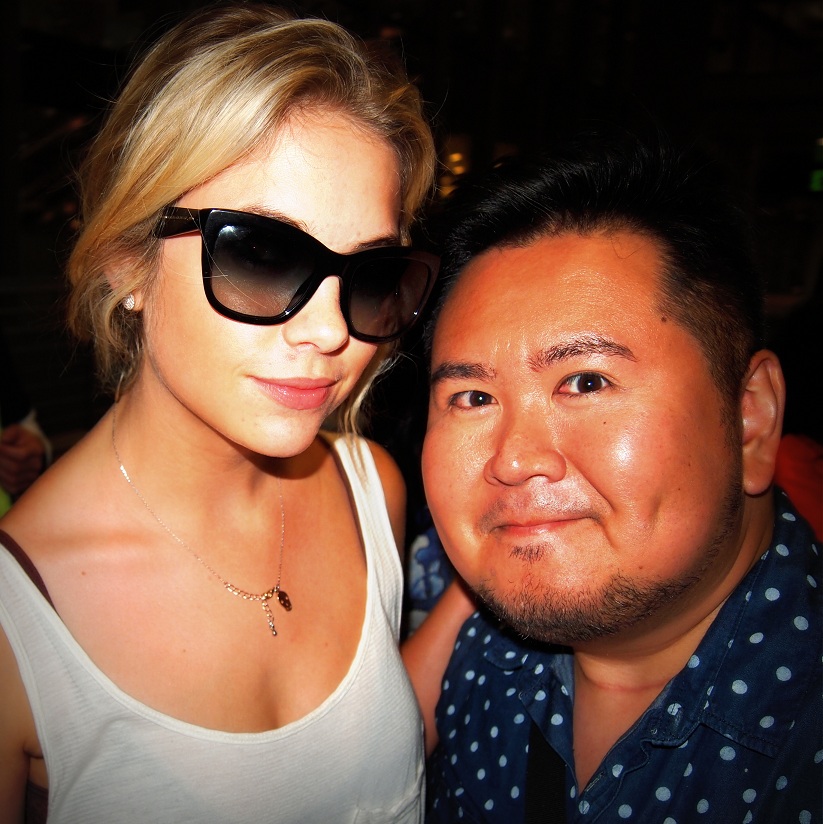 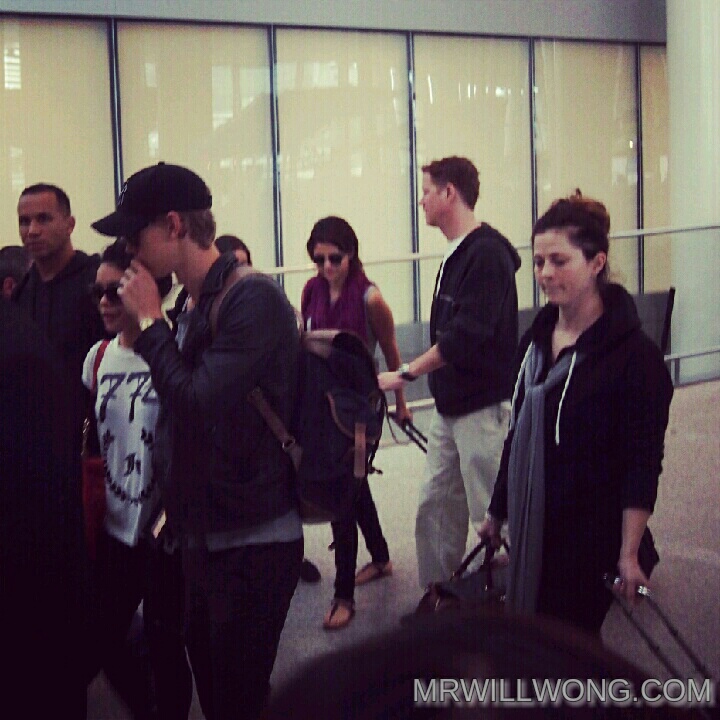 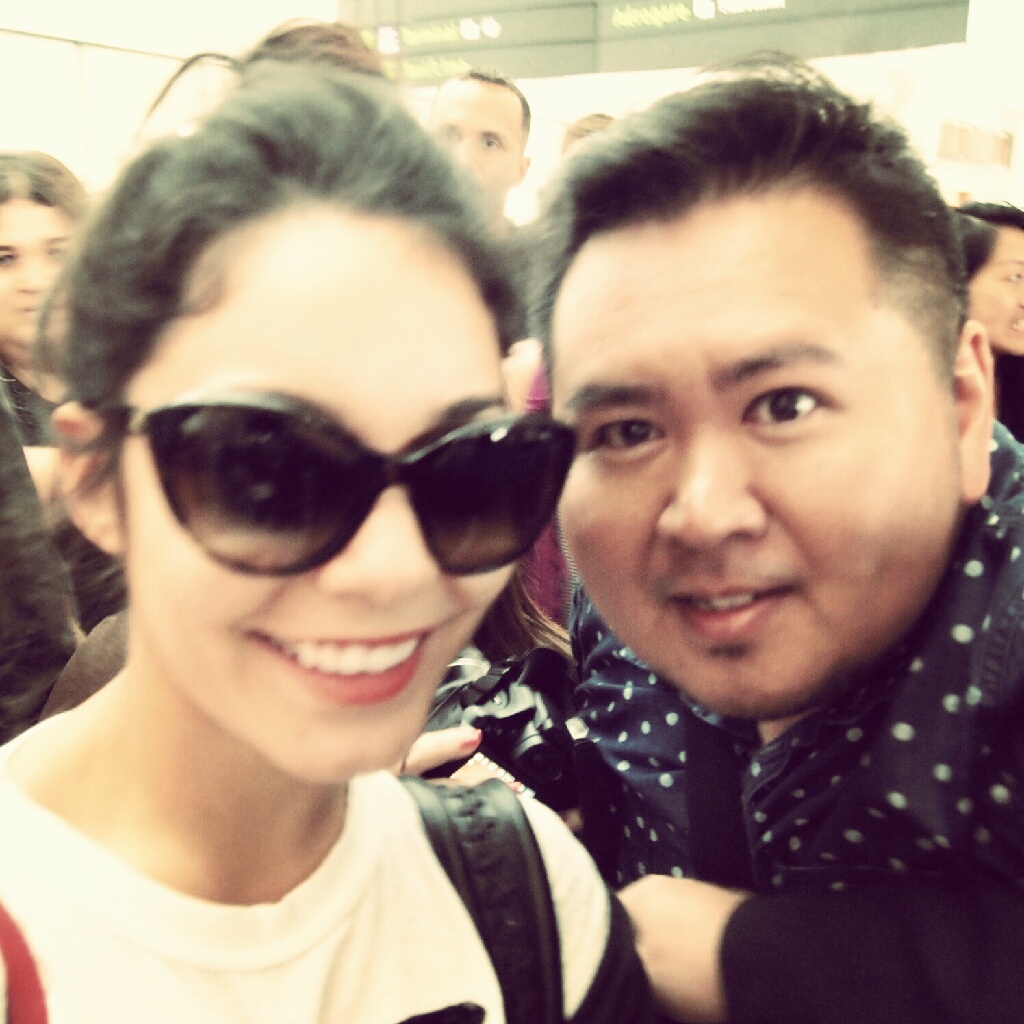 Yes, this really happened!  Despite causing a bit of chaos, she still was lovely. Vanessa Hudgens arrived straight from the Venice Film Festival to TIFF 2012 together with her Boyfriend, Austin Butler earlier today in Toronto.  The High School Musical Alumni is in-town to promote Comedy  Spring Breakers, which premieres tomorrow night at Ryerson Theatre – 6:00 PM.