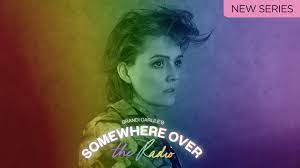 Multi-Grammy-winning Country Superstar Brandi Carlile has a new show coming to SiriusXM! The monthly show will showcase LGBTQIA+ Artists and their Allies! ‘Brandi Carlile’s Somewhere Over the Radio,’ is a monthly show available on The Spectrum (ch. 28). The show premieres Wednesday, August 10, 2022 at 2 p.m. ET.

On the show, Carlile will curate the music, focusing on artists who are part of the LGBTQIA+ community and their allies. In the premiere episode, Carlile is joined by her wife Catherine Carlile to share music from artists like Tracy Chapman, Elton John, Antony and The Johnsons, Arlo Parks, The Indigo Girls, Sister Rosetta Tharpe, Dolly Parton, and more. Carlile will also share personal anecdotes between songs and engage in candid conversations with her guests.

“This show is about the impact that LGBTQIA + artists have made on the world, the spiritual realm, and certainly our family through the transcendence of music,” says Carlile. “Queer artists and pioneers have given my wife and I everything that we have including each other. Let’s shine a little light on queer excellence today.”

Brandi Carlile’s Somewhere Over the Radio premieres August 10 with new episodes airing the first Wednesday of every month at 2 p.m. ET on The Spectrum. Carlile also appears in upcoming TIFF ’22 selection THE RETURN OF TANYA TUCKER: FEATURING BRANDI CARLILE!

SiriusXM and Just for Laughs are teaming-up again for a third year! While the in-person Festival is celebrating its 40th edition in Montreal July 13-31, 2022, an audio-only Festival just days before the in-person events, can be heard only on SiriusXM. Listeners will hear jokes from the biggest names in Comedy from over the history of the Festival.

From Monday July 11 to Sunday July 17, 2022 inclusive, SiriusXM listeners can enjoy the best moments from the past four decades of the Just For Laughs festival, including both rising news stars and world-class comedy talent, broadcast live on Raw Dog Comedy, SiriusXM Channel 99. Monday through Saturday, two hour-long specials will air each day at 10am and 5pm EST. Then on Sunday the 17th, the virtual festival will conclude with an audio marathon of the best of Just For Laughs starting at 8am EST. Just For Laughs Canada (SiriusXM Channel 168) will also be playing the virtual festival daily at 11am EST.

Learn more here about the Festival!

The fourth annual SiriusXM Top of the Country competition is set to take to Calgary as part of the CCMA’S COUNTRY MUSIC WEEK 2022, airing live on SiriusXM! A huge headliner also is set to be announced. The top three finalists have been selected based on public vote!