As the din of the screams, tears and cheers that greeted Shawn Mendes, the last person to walk down the red carpet, dissipated into the air, I entered the Sony Centre for the Performing Arts to watch returning Master of Ceremony, the very charming and professional Jason Priestley, host and introduce the most deserving inductees to this year’s CANADA’S WALK OF FAME.

Before each of the inductees had their moments to shine on the beautifully-adorned stage (which had screened clips and interviews of previous honorees that included Michael J. Fox and Anne Murray before the show started) there was a buzz of anticipation in the air. It is not very often that we get the chance to see some of the greatest talents this country has to offer.

Olympic gold medalist, Silken Laumann, spoke of courage and overcoming adversity. A somewhat unusually subdued Don Cherry and the very eloquent Ron MacLean showed us why they were so deserving of this accolade. After the effusive introduction from songstress extraordinaire Molly Johnson, author of “The Book of Negroes” (and brother to singer Dan Hill), a humble Laurence Hill, mesmerized the audience with his personal story of family and strength. Multi-talented and multiple Gemini Award winning actress, Wendy Crewson, gave the most passionate and fiery speech about the art of the craft that had the audience cheering. I have become even a bigger fan of Shawn Mendes, after he shyly and nervously accepted the Allan Slaight Award, then came back later in the show to sing two songs. This talented young man from Pickering has class AND talent!

There was then a lovely tribute to the late, Ottawa-born Lorne Greene who will be forever known as Ben Cartwright in the television classic, “Bonanza”. Vancouver Canucks‘ Trevor Linden had fun talking about the lack of hockey skills the last inductee. Michael Bublé, has, but what Bublé lacks on the ice, he more than makes up for in talent! Not only does he command the stage when he sings, in accepting his award, Michael Bublé was the consummate entertainer. His speech was funny, slightly ribald, modest and genuinely moving when he talked about his wife and son. Newly-minted Canadian, Johnny Reid, ended the show with an inspirational song from his new album.

You may have noticed that I have been vague about many of the exciting things that occurred on stage at the CANADA’S WALK OF FAME celebrations. My intent is to tease only and ensure you watch this show, as I will again, when it is televised on the Global Network on Thursday, December 17, 2015 at 8 PM EST. Watching it will give you another reason to be a proud Canadian!  More here.

Hot on the heels of last night’s MuchMusic Video Awards, the 25th annual SOCAN Awards honouring accomplishments across multiple genres in Canadian Music. Held by the Waterfront at the Westin Harbour Castle, some of the Country’s most accomplished Musical Acts, Songwriters, Producers, Lyricists and more came out to celebrate their peers.

The Belle of the Ball certainly was a recently back-from-Broadway (she starred in Cinderella) Jepsen who is working on her second major label album. “I’d have to say some of Tegan and Sara‘s stuff”, she says when asked which Canadian Song she wishes she had written.  She and the Team of Tavish Crowe and Josh Ramsay received the International Achievement Award for their Smash, Call Me Maybe.

Hip-Hop Megastar Drake also was honoured with the Global Inspiration Award, helping spark the careers of dozens of Songwriters, Beat-Makers and Producers. 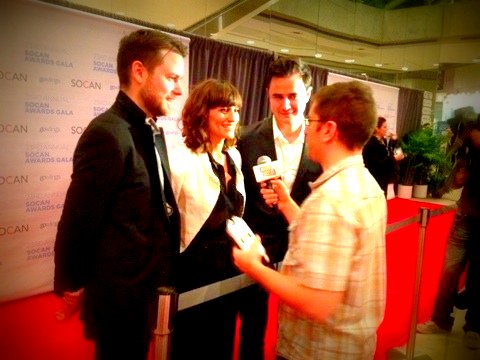