#BOXOFFICE: “THE DARK TOWER” BRIGHT ON A DIM WEEKEND

Debuting atop the Box Office this weekend on a tepid weekend is Sony Pictures’ THE DARK TOWER with a $19.6 million from 3,451 theatres across North America.  The Stephen King adaptation musters only a 19% from Critics on the Tomatometer and a B CinemaScore.

Former champion DUNKIRK slips to second this weekend with $17.4 million for Warner Bros.  Thus far over three weeks it has grossed $132 million domestically.

In third is Sony Pictures’ THE EMOJI MOVIE with $12.6 million in its second week out. It has earned $49.5 million thus far.

Fourth is Universal Pictures’ hit GIRLS TRIP with $11.5 million in its third week out, surpassing $85.5 million, making it the top-grossing Comedy of the Summer.

KIDNAP debuts in fifth with $10.1 million from 2,378 theatres for eOne Films/Aviron Pictures. The Thriller starring Halle Berry gets a 40% on the Tomatometer and a B CinemaScore.

DETROIT from Oscar winner Kathryn Bigelow, debuts in eighth with $7.3 million from 3,007 theatres for eOne Films/now-distributor Annapurna Pictures. It gets 93% on the Tomatometer and an A- CinemaScore.

Rounding-out the Top Ten is DESPICABLE ME 3 with $5.5 million for Universal Pictures in its sixth week.

Synopsis:
From the Academy Award®-winning director of The Hurt Locker and Zero Dark Thirty, Detroit tells the gripping story of one of the darkest moments during the civil unrest that rocked Detroit in the summer of ’67. 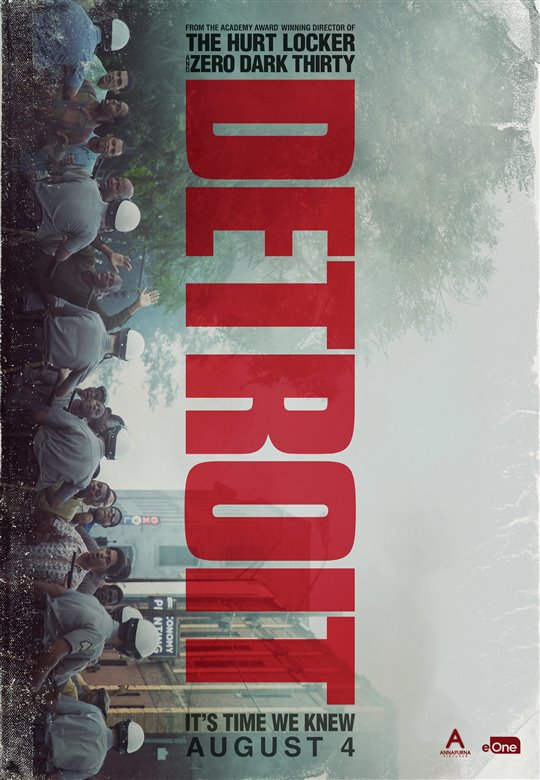 Synopsis:
This Film depicts actual events that took place surrounding the civil unrest in Detroit during the summer of 1967. The story has been brought to life by Kathryn Bigelow, the Academy Award®-winning Director of The Hurt Locker and Zero Dark Thirty. DETROIT exposes shocking real events that took place in the 60s, which are unfortunately ever-present in today’s society.