#FANTASIA: “BLEED WITH ME” 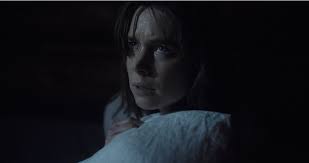 While feeling like a third-wheel on a weekend getaway with friend Emily (Lauren Beatty) and Emily’s boyfriend (Aris Tyros), Rowan (Lee Marshall) begins having horrifying visions during the night of Emily. However, Rowan can’t tell if these visions are fact or fiction.

First-time Feature Writer-Director Amelia Moses has created a gripping isolation Horror film. The remote settings, the indoor fire-lit cabin and outdoor snowy landscape are beautifully shot. Both enhancing the isolation theme and encapsulating the otherness Rowan feels. Early on, Moses blurs lines of doubt and certainty upon Rowan’s hazy nightmarish visions. Skillfully evoking audiences to question themselves as Rowan does. The film is embedded by Marshall’s self-contained, subtle performance that’s somehow both quiet and loud.

Bleed with Me Fantasia Lauren Beatty