#BOXOFFICE: “IT” IS ALL THAT A THIRD STRAIGHT WEEK

As the temperatures drop, so are ticket sales at the Box Office this weekend.  IT from Warner Bros. continues to terrify audiences across North America in a tight three-way finish earning $17.4 million in its fourth weekend on-top, totaling a stellar $290 million in its run to date.

After debuting in second last weekend, KINGSMAN: THE GOLDEN CIRCLE remains unchanged with $17.1 for 20th Century Fox. Over two weeks it has grossed $67 million across North America.

Debuting in third is AMERICAN MADE starring Tom Cruise, with $16.1 million for Universal Pictures.  It plays in 3,024 theatres domestically. It gets a solid 87% on the Tomatometer and a B+ CinemaScore.

THE LEGO NINJAGO MOVIE is in fourth this weekend with $12 million for Warner Bros. It has made $35 million in two weeks.

Sony Pictures’ FLATLINERS Reboot, filmed here in Toronto, debuts in fifth with $6.7 million from 2,552 theatres. It gets a B- CinemaScore and shocking 0% on the Tomatometer critically.

TIFF ’17 selection BATTLE OF THE SEXES is in sixth for Fox Searchlight with $3.4 million, expanding to 1,192 theatres in its second week.

Rounding-out the Top Ten is mother!, earning $1.3 million for Paramount Pictures. In three weeks it has made $16.2 million.

american made Battle of the Sexes It kingsman Mother! the lego movie

#GIVEAWAY: ENTER TO WIN ADVANCE PASSES TO SEE “AMERICAN MADE”

Synopsis:
In Universal Pictures’ American Made, Tom Cruise reunites with his Edge of Tomorrow director, Doug Liman (The Bourne Identity, Mr. and Mrs. Smith), in this international escapade based on the outrageous (and real) exploits of a hustler and pilot unexpectedly recruited by the CIA to run one of the biggest covert operations in U.S. history. 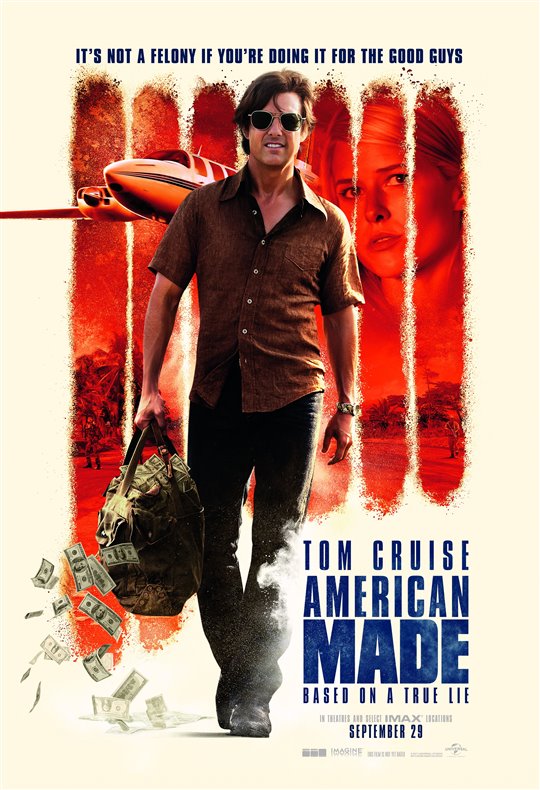