The Fan Reviews are in.  SWEARNET is f*ckin’ hilarious!  Fans gathered to see the Sault Ste. Marie-filmed Comedy starring the Cast of the Trailer Park Boys (Robb Wells, John Paul Tremblay and Mike Smith) directed by Toronto’s own Warren P. Sonoda.  The vulgarity-laced Film follows the Actors’ Careers following the success of the mentioned TV Series as they look to launch their own uncensored Internet Network.

Our v. own Jonathan Godfrey was there to partake in all the fun and sent along the above Snaps from the fun at Scotiabank Theatre tonight!  He got some great Snaps also of Actresses Ann Pirvu, Shannon Leroux and Sarah Jurgens.

If Funnyman Jay Baruchel’s (who was in-attendance) Twitter Review (below) is any indication how amazing the Comedy is, then expect nothing but hilarity.  Our Review to follow soon! 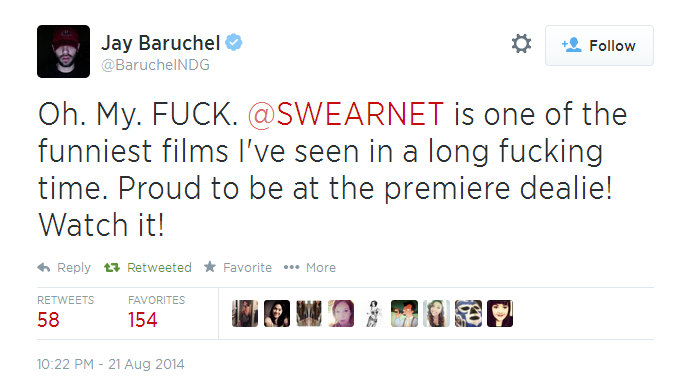