#SPOTTED: DAVE BATISTA IN TORONTO FOR “GUARDIANS OF THE GALAXY”

Toronto got a huge surprise last night as six-time World Champion Wrestler Dave Batista came to do a day of Press in support of his latest, the eagerly-awaited GUARDIANS OF THE GALAXY from Marvel!  The WWE Star has directed his sights to a promising career as an Actor and in the Blockbuster he plays the role of Drax the Destroyer.  In addition to being known for his brute strength and resilience, the Character has the ability to blast energy from his hands.

Batista was up and at it early leaving his Hotel in the Entertainment District with his Entourage –  not without some Starbucks first – before spending much of his day at the Bell Media Building, taping interviews and also doing a live appearance on CP24 Breakfast.  On the Show, he revealed that he had a team of five people whom spent four-and-a-half hours applying makeup each day.  “I think this is the best Film Marvel‘s ever done”, he proclaims.  Visit CP24 Breakfast’s Site under the “VIDEOS” section for the complete interview here.

Making an appearance at an Advance Screening last night held at Scotiabank Theatre, Batista fielded questions on the Red Carpet before heading on in to introduce the Blockbuster, even posing for a group photo with Fans. 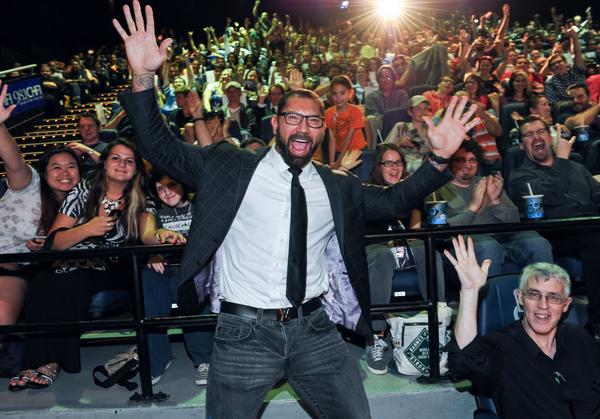 Special thanks to our Contributor Jon Godfrey for sending over  his Snaps of Batista at the Screening last night!  Review coming soon!

And remember that time we met Chris Pratt?  He’s absolutely the nicest. We’re thrilled to see his ascension in Hollywood from the Guy-Next-Door to a bona fide Superstar!

Click here to cancel reply.
#SPOTTED: JANE LYNCH IN TORONTO FOR FEBREZE
#FIRSTLOOK: NEW STILLS & TRAILER FROM “INTO THE WOODS”