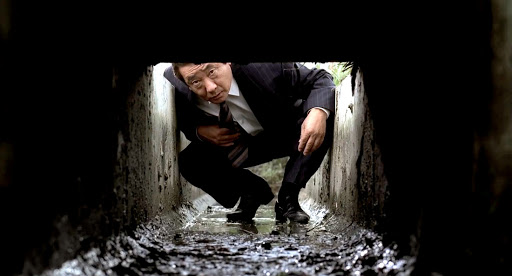 Based on a true story, Memories of Murder chronicles the manhunt for a Serial Rapist and Murderer causing panic in small town South Korea during the 1980s. The Film was initially released in 2003, but has been digitally remastered to take advantage of Writer/Director Bong Joon Ho’s history making Best Picture win for Parasite at this year’s Academy Awards, as well as the news of the real-life Killer finally being caught in 2019.

Memories of Murder is a riveting masterpiece. There is no more eloquent way to say it. In only his second film, Bong creates a dark, dreary, thrilling world of murder and obsession – harping expertly on the anguish and agony the detectives working the case face as bodies continue to pile-up and none of their leads come to fruition. The 1980s aesthetic works wonders for the Film, drawing the audience into this real life Crime Drama and giving it just the right hint of authenticity. The way Bong frames some of the scenes is brilliant and the way he uses rain could be studied endlessly. His masterstrokes in this Film signaled what a great Filmmaker he would quickly become, and it is fascinating to see them play out all these years later. Bong perennial Kang-ho Song is superb as the Film’s Lead, commanding the screen at every turn. His eyes are beautifully-expressive, and watching them fill with sorrow and pain is easily among the Film’s many highlights. Sang-kyun Kim is just as great, if not better; the aggravation of the never-ending case really weighs down on his character, and the way his expression, tone and body language transforms over the course of the Film is miraculous to watch.

My qualms with the Film are minor though notable. For one, it is exhausting to sit through; I felt like I had run a marathon by the time Memories of Murder ended. No doubt this pacing is deliberate, as it feels like Bong wanted his audience to feel the heavy toll the case had on the people working it. It felt very much in the same vein as David Fincher’s Zodiac, an accomplished and incredibly-detailed case study into the titular serial killer that runs for just over two and a half hours. Memories of Murder is not nearly as long, yet it comes very close to replicating that same sleepless monotony and crazed behaviour exhibited by the detectives working the case. None of this is a bad thing by any stretch, but it may prove frustrating for casual viewers. My only other issue is the odd pivots the Film takes into Comedy in the first half. Some feel natural; others feel odd and out of place. I realize that parts of the Film benefit greatly from not being as relentlessly dark as others. I just felt some of these moments could have been handled a bit more organically (but hey, maybe police brutality was a little funnier in any other year?).

Memories of Murder is a spellbinding work from a Master Auteur. It is just as richly-rewarding as it is exhausting. If the Film’s aesthetic and storyline do not keep you riveted, the magnificent performances from Song and Kim surely will. Once the Credits rolled, I immediately wanted to cancel all my plans and watch it again. So if you have never had the chance to see Memories of Murder previously, you need to correct that oversight as soon as physically possible. And if you have already experienced this masterpiece before, then it is about time you watched it again. Bong-hive, assemble!

*Please ensure you exercise caution in observing COVID-19 protocols if seeing this in-theatre*.