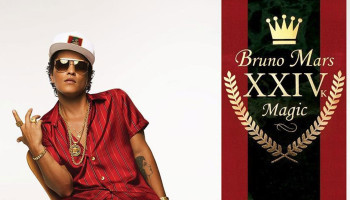 Everything U.S. Thanksgiving, we are graced with that one blockbuster album and around this time last year, it was Adele‘s 21. This year, singer/songwriter/multi-instrumentalist and entertainer extraordinaire Bruno Mars gifts us with a celebratory ode to the late ’80s and early ’90s in 24K MAGIC, a long-awaited follow-up to his 2012 sophomore disc, UNORTHODOX JUKEBOX which before UPTOWN FUNK  dominated our airwaves.  Coincidentally, Mars even contributed a track to that English songstress’ disc too.

I will say without hesitation this is Mars’ finest and most cohesive effort yet. The unapologetically confident collection is full of swagger  – every track is a gem, with heavy nods to the likes of Jimmy Jam and Terry Lewis, Boyz II Men, Tony! Toni! Toné!, New Edition and so much more. Vocally, he has never sounded more in his element and the album takes us back to a time when melodies and vocals truly mattered. Over nine tracks, we are delighted with pure nostalgia.

Handling production are a reformed version of Mars’ longtime partners The Smeezingtons, re-branded as Shampoo Press & Curl, hence the sound feels completely familiar. While we love every single track, our favourites are where slows it down a notch like potential single Versace on the Floor, a Babyface co-penned Too Good to Say Goodbye and Calling All My Lovelies in which he boasts “I’ve got Alicia waitin’, Aisha waitin’, All the eesha‘s waitin’ on me”. And wait till you hear who makes a special cameo on the track. We foresee success for uptempo tracks like Chunky and the James Brown-esque Perm, putting him back into that well-received Uptown Funk  territory.

Us kids of the ’90s will find lots to love and reminisce about here. By far our favourite album of 2016. Warner Music Canada release 24K MAGIC, in-stores and on iTunes now here.