#GIVEAWAY: ENTER TO WIN A 2014 VIP QUEEN’S PLATE EXPERIENCE WITH MR. WILL | THE CONTENDERS!

With less than five weeks to go till the 155th edition of the QUEEN’S PLATE, we’re counting down the days to one of our favourite events of the Summer! We’ll be separating the Contenders from the Pretenders and also remembering some of our favourite looks from recent Queen’s Plates! May together we too can get a bit of inspiration what to wear on the Big Day, Sunday, July 6, 2014?

Hint: you can never go wrong with blue, a Top Hat or a lovely Fascinator! The colour of choice this year just might have to be pink as Woodbine Entertainment partner with Rethink Breast Cancer for the first time! $1 from every Queen’s Plate Tickets in fact go to Breast Cancer Research and Awareness!

The mile-and-a-quarter $1-million Race held annually at Woodbine Racetrack, puts Canada’s best three-year-old Horses against one another in the Test of a lifetime. Past Winners of the Race whom would go on to achieve great fame include the likes of Dance Smartly, Awesome Again, Northern Dancer and With Approval, their offspring changing the face of Horse Racing on an international scale. Members of the Royal Family have made their way to Woodbine in previous years to celebrate the Race, with Queen Elizabeth II visiting most recently in 2010.

The Field for the Queen’s Plate is shaping-up nicely and we can expect some Canadian-born Invaders based in the U.S. to make their way north for a shot at the Winner’s Purse.  Keep in mind, a lot can happen in five weeks, so these names are subject to change.

We can expect WE MISS ARTIE, who won the Spiral Stakes at Turfway Park in Kentucky back in March before a tenth-place finish against Horse Racing’s It Boy, California Chrome, in the famed Kentucky Derby.  Mind you, that is by no means a disgrace. He should really be renamed We Welcome Artie as we waited way too long on his Canadian debut, but it was well worth it as he effortlessly won the Plate Trial at Woodbine with plenty left in the tank under top U.S. rider Javier Castellano.

Owner Ivan Dalos and Trainer Josie Carroll (the first female Trainer ever to win the Queen’s Plate) have a strong Duo in undefeated filly ARAGORN AMI, Winner of the Martha Washington Stakes at Oaklawn Park in Arkansas in February and also  the promising colt AMI’S HOLIDAY, who had a horrendous trip this past weekend to finish third (although awarded second place through disqualification) in the Marine Stakes at Woodbine.  That Race is seen as an important stepping stone to the Queen’s Plate.  The Plate Trial on Sunday, June 15, 2014 will paint us a clearer picture of where he fits, but he definitely is one of the ones to beat.

ASSERTING BEAR last weekend won the Marine Stakes before being disqualified and placed third for interfering with AMI’S HOLIDAY. That Race aside, the tenacious colt has shown he belongs with the best, winning the Nation’s top race for two-year-olds last fall, the Coronation Futurity. His Stablemate MAN O’BEAR comes highly-touted by their Trainer Reader Baker, although he has yet to make his first start in 2014 after a successful, promising two-year-old campaign.

Iconic Sam-Son Farms have won the Plate five times and just might have a shot with their speedy colt SPEIGHTSONG, a half-brother to reigning Canadian Horse of the Year Up with the Birds, who ran second in Queen’s Plate last year. Although his Trainer Malcolm Pierce has some concerns whether he can handle the classic mile-and-a-quarter distance –  a real test of stamina –  he is seen as a major contender.

Never discount the girls as seven fillies have won this prestigious Race prior. In addition to the aforementioned ARAGORN AMI, expect the superb PALADIN BAY to face the Boys in the Plate. The Finalist for Champion 2-year-old Filly honours last year at the Sovereign Awards appears to be peaking at the right time. After a dynamic win in the Selene Stakes at Woodbine last month, she faltered in the Woodbine Oaks, but could well re-group if the cards line-up right in the Queen’s Plate.

LEXIE LOU, who recently was purchased by American Film Mogul Gary Barber (21 Jump Street, The Hobbit: An Unexpected Journey), has fought tooth-and-nail with PALADIN BAY for much of her career and her win in the prestigious $500k Woodbine Oaks solidifies her not only as a leader in her division, but also a major threat to win the Queen’s Plate.

Looking for a Dark Horse? Several of this year’s Queen’s Plate Nominees are light on racing experience – some which have yet to win a race. Do keep a tab on the likes of UNIKAT, owned by Canadian Billionaire Frank Stronach‘s Adena Springs. The colt with regal bloodlines recently shipped to Woodbine to train and looks still to win his first race here. Fans of The Lego® Movie, which we’re giving away copies of, might find something to like about his name!

Chiefswood Stables might know a thing or two about having a Horse ready for the Queen’s Plate having won in 2004 with Niigon. Their LATIN PIPER is handled by Trainer Rachel Halden and Rider Steve Bahen (partners both on and off the track), looking to be ripe and ready for the Big Race and he continues to improve; the same applies for his brother, the consistent NIIGON EXPRESS, trained by Paul Attard and also being primed for the Plate.

FREITAG is owned now by Tycoon Earle I. Mack who won the Canadian Triple Crown in 1993 with Peteski.  The handsome colt looks to be peaking at the right time with a win mid-June in preparation for the Plate.

American Oil Tycoon John C. Oxley always is well-represented with an A-List roster of Horses based at Woodbine.  This year he has the sometimes-great MATADOR, who despite not showing consistent form, certainly isn’t to be discounted even though he disputably is a better horse on the grass (the Queen’s Place is raced on a synthetic dirt Polytrack).After a tough winter campaign, he returned home victoriously in a key prep race against lighter competition.

LEIF ERIKSON also is showing rapid improvement and the colt named after the Norse Explorer of the same name, looks like he might like the added distance of the Plate. He ran second to MATADOR in what will serve as a prep for the Plate Trial June 15, 2014, but faltered in another prep mid-June.

We’re sure even his Owners J. Peri, Frank DiGiulio Jr. and Bob Tiller (who also trains him) didn’t expect the gray THE IMPOSTER to be as good as he is, but he’s built an almost-flawless race record in three starts. More recently, he ran second to SPEIGHTSONG in the Queenston Stakes at Woodbine and looks to be improving just at the right time.

Those of you who love a good hunch bet will love Transformers-inspired COLTIMUS PRIME, who has shown good consistency at Woodbine and most recently won a prep for the Queen’s Plate. The Film (and Franchise Character) for which he is named after, actually will be in theatres about a week before the Queen’s Plate and as a side note, we will be giving away Passes shortly for TRANSFORMERS: AGE OF EXTINCTION right here rather soon! Stay tuned.

See my Snaps of some of the 2014 Queen’s Plate Contenders below:

Rethink Breast Cancer  will for the first time be throwing a Bash and you can attend their Rethink at the Races Vintage Garden Party! Details here.

There will be plenty of Food Trucks at Woodbine on Queen’s Plate Day this year including local Faves like Beavertails, Smoke’s Poutinerie, Nathan’s Hot Dogs and Curbside Bliss Cupcakes and more!  All are welcome to attend the Hats & Horseshoes Party (it’s free!) which begins at 12:00 PM near the Walking Ring where the Horses come out and parade before their races.

If you want to be a part of MR. WILL’S 2014 QUEEN’S PLATE VIP EXPERIENCE, here’s your chance to party with me at the ultra-exclusive Flare Magazine Lounge.  There will be amazing food, cocktails, glamour and tons of fun to be had!  The Winner also will receive Grandstand Tickets to enjoy an amazing afternoon at the Races! And let’s not forget the chance to win some money!

Worried about transportation? No worries, we’ll see to it that you have access to our private luxury shuttle!

To enter to experience the Party of a lifetime, Toronto Readers simply can click “like” on this Post at Mr. Will Wong on Facebook and tell me which of the Queen’s Plate Contenders (named above) you’re rooting for.  You are encouraged to share this Post with your Friends on Facebook to increase your chances at winning! You also may Re-Tweet the below:

Learn more about the Queen’s Plate here and start planning your visit like right now!

Tickets are still available, but always sell-out!  Click on the banner below to get yours now: 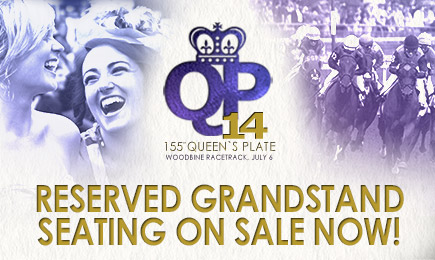