For a limited time only, Sony Pictures is teaming-up with Gallery 1988 as top emerging Designers and Artists come together in PROJECT POP ART, commemorating some of the Studio’s most iconic Films of all time!  Beginning November 23, 2014, 16 of Sony Pictures‘ Cult Classic Titles will be re-issued on Blu-ray™ in SteelBook™  Packaging!

DAS BOOT – Directed by Wolfgang Petersen, the critically acclaimed 1981 film is set aboard the claustrophobic world of a WWII German U-boat as the crew fights boredom, filth, and sheer terror. Illustration by Kevin Dart, an art director living in Los Angeles.www.kevindart.tumblr.com

DESPERADO – Antonio Banderas and Selma Hayek star in this 1995 cult classic directed by Robert Rodriguez about a gunslinger who is embroiled in a war with a local drug runner. Illustration by Scott Derby, a Philadelphia-based illustrator who is heavily influenced by pop culture.  www.Scottderby.blogspot.com

DISTRICT 9 – From producer Peter Jackson and director Neill Blomkamp comes a startlingly original science-fiction thriller where alien refugees, stranded on Earth, are exiled to a slum on the fringes of Johannesburg. Illustration by Dave Quiggle, a Southern California illustrator who is well known for his work within the music industry and pop culture work for Disney. www.davequiggle.com

DRIVE – A Hollywood stunt performer (Ryan Gosling) who moonlights as a wheelman discovers that a contract has been put on him after a heist gone wrong. Illustration by Jeff Boyes, a Canadian illustrator, screenprint artist and graphic designer based in Vancouver. www.visualtechnicians.com

LEON: THE PROFESSIONAL – A professional assassin rescues a young girl whose family was killed in a police raid, in this thriller directed by Luc Besson that stars Jean Reno, Gary Oldman and Natalie Portman. Illustration by Jeff Boyes, a Canadian illustrator, screenprint artist and graphic designer based in Vancouver.  www.visualtechnicians.com

DR. STRANGELOVE – Peter Sellers, George C. Scott and Sterling Hayden star in the 1964 classic directed by Stanley Kubrick about an insane general who triggers a path to nuclear holocaust that a war room full of politicians and generals frantically tries to stop. Illustration by Rich Kelly an illustrator working in Pittsburgh. www.rfkelly.com

THE KARATE KID – Ralph Macchio, Pat Morita and Elizabeth Shue star in this story about a handyman/martial arts master who agrees to teach a bullied boy karate and show him that there is more to the martial art than fighting. Illustration by Sam Gilbey, whose distinctive and contemporary illustrations and portraits are painted by hand and are inspired by a lifelong passion for popular culture.www.samgilbeyillustrates.com

KUNG FU HUSTLE – This hilarious movie is set in Shanghai, China in the 1940s, where a wannabe gangster aspires to join the notorious “Axe Gang” while residents of a housing complex exhibit extraordinary powers in defending their turf. Illustration by Anthony Petrie, a commercial artist and product designer living in NYC.  www.anthonypetrie.com

THE RAID: REDEMPTION – A S.W.A.T. team becomes trapped in a tenement run by a ruthless mobster and his army of killers and thugs in this blood-drenched action picture directed by Gareth Evans.  Illustration by Phantom City Creative, Inc., a creative agency based in Toronto.  www.phantomcitycreative.com

STRIPES – Directed by Ivan Reitman, this cult classic about two friends who are dissatisfied with their jobs and decide to join the army for a bit of fun, stars Bill Murray and Harold Ramis. Illustration by Chris DeLorenzo, a young graphic artist and illustrator working out of Boston.  www.chrisdelorenzo.com

TAXI DRIVER – Robert De Niro and Jodie Foster star in this highly regarded classic from director Martin Scorsese about a mentally unstable Vietnam War veteran who works as a night-time taxi driver in New York City where the perceived decadence and sleaze feeds his urge for violent action, attempting to save a preadolescent prostitute in the process. Illustration by James Flames, a storyteller who uses illustration and printmaking to share tales of adventure and inner exploration.  www.jamesflames.com

TOMMY –  Based on The Who’s rock opera and directed by Ken Russell, this extravaganza stars Roger Daltrey as a psychosomatically deaf, dumb and blind boy who becomes a master pinball player and the object of a religious cult because of that. Also starring are Ann-Margret, Oliver Reed, Elton John and Tina Turner. Illustration by Tom Whalen, whose recognizable graphic style can be found on a wide variety of album covers and screenprints, posters and comic books. www.strongstuff.net 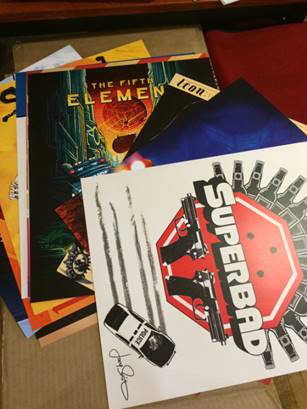 Each Title is available for pre-order now exclusively at Best Buy.