After much speculation sparked after a radio interview on Los Angeles’ POWER 106 last week, Justin Bieber has officially dropped a Christmas Bomb, confirming his retirement on Christmas Eve at 10:22 PM EST.

The Entertainer is back home in Stratford spending the Holidays with Family, flying-in to the City earlier this week. Knowing certainly how to capitalize on Publicity with a Documentary Believe, which looks at a darker side of the Singer’s fame, being in theatres Christmas Day, his Fans certainly will be combing the Film for clues to this sudden announcement. 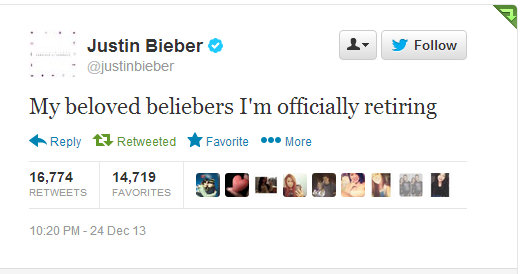 See the Trailer for Believe below: