It’s been nine years since we’ve heard from the $1.9 billion-worldwide-grossing TOY STORY Franchise, but the gang is back and we’re ready for some new adventures in TOY STORY 4. This latest installment centers on Woody (Tom Hanks), who must take care of his new kid Bonnie (Madeleine McGraw) and her new self-made toy Forky (Tony Hale). After Woody and Forky are separated on a road trip, the former  goes on a mission with friends new and old, to bring him back to Bonnie. Together we learn how big a place this world is for a toy.

In Toronto to ring-in Toy Story 4‘s Canadian Premiere is Primetime Emmy Award winner Tony Hale (Veep, Love, Simon) who voices soon-to-be fan favourite, Forky. He tells us all about his journey with the eagerly-awaited Blockbuster.

We ask Hale about how he came to be involved with Toy Story 4.

Hale: “I feel like I had the imposter theory and that someone’s gonna figure out they made a mistake”, he jokes. “I heard they were interested in me. The cool thing – as a side bar – is the first Toy Story started in 1995 and that was the year I moved to New York to become an actor. I remember seeing the Movie and thinking, ‘Gosh, this Animation is on another level. I never thought I’d be a part of this Franchise, but they brought me up to Pixar, which is this creative wonderland, and then they just started describing Forky to me.  They were like, ‘We thought of you, he has this neurotic energy’, and I was like, ‘check!‘.”.

“The cool thing about Pixar is that they create this family community environment. They really broke down not just how simple he looks, but also how he sees the world so simple and I thought of my daughter when she was four or five and she just had so many questions. And just constantly absorbing one thing after the other.”.

Hale tells us about the importance of his character.

Hale: “I love the message. I think the whole journey from seeing himself as trash, to come along and realizing he has a bigger purpose than that, he has value and I thought, ‘What a beautiful thing to put out into the world’.”. He adds, “Everybody has a tremendous purpose and I love being a part of it.”.

We ask Hale about the very prominent featuring of  a Canadian Stuntman character, Duke Caboom and working with Keanu Reeves.

Hale: “He’s the nicest guy and he’s so hilarious in this Movie. It’s the way he brings his swagger to the character that contrasts with these very sharp movements, it is so funny. And then they bring this emotional trauma to his life. His story just really makes me laugh. It’s really great that him and Forky get to have this journey together.”.

Hale kids that his humour “comes from a lot of pain”a while his characters have had to do some outlandish things in his celebrated career, he says “Yes, I’ve had to do some colourful bits, however I actually would like to be held by Tom Hanks!”.

Greg Mason, VP of Marketing at Walt Disney Studios Canada took time to chat with us about how the idea of Duke Caboom originated and how his office was actually very much involved!

Mason: “It’s been three-and-a-half years in the making. It goes back to Zootopia where we had Peter Mansbridge do a cameo as Peter Moosebridge. We’re always trying to insert a bit of Canadian in here and there.”.

“We’ve had Jonas Rivera (Producer) in Toronto twice and I see him when I’m in San Francisco. After working on Inside Out, I asked if we could do a little something for Canada. And he replied, ‘You’re gonna love Inside Out. Riley plays hockey and her boyfriend is from Canada’.”.

Rivera came back to Mason, telling him, how for Toy Story 4, he had ideas in mind for a Canadian Dardevil character, letting them make notes on his Character Design and they even sent notes on Casting. He says, “Pixar is so detailed. Right away they said, the Actor had to be Canadian. Our team got together with suggestions and Keanu was on the list. We loved the idea of Keanu and they brought him in and did a read-through and that’s how it came to be.”.

It’s been a while since the last Toy Story film and a lot changing in how Movies are marketed since then. We ask Mason how this can be navigated.

Mason: “Very carefully. With knew we had something special with Duke Caboom and we wanted him front and centre, but it’s not a Duke Caboom film, it’s a Toy Story film. Pixar is wonderful about letting us do stuff and figure it out from here.”.

Jonas sent us the first photo of Duke and he had a box of Timbits! They think everything through and the Animators who worked on Duke, every single one was Canadian! I didn’t have to tell them that and our team is proud of this.”.

The festivities moved down the road in the evening to Scotiabank Theatre. Prizes to be won by guests at the Premiere included memorabilia from the Film including Plushies, T-Shirts and more. Fans got a chance too to see Hale on the Red Carpet and he was joined by Toronto’s Queen of Cake Decorating, Yolanda Gampp who presented a Toy Story-inspired cake. French-Canadian Voice Actor François Bellefeuille who voices Forky in the French-Canadian version also walked the Carpet as well! 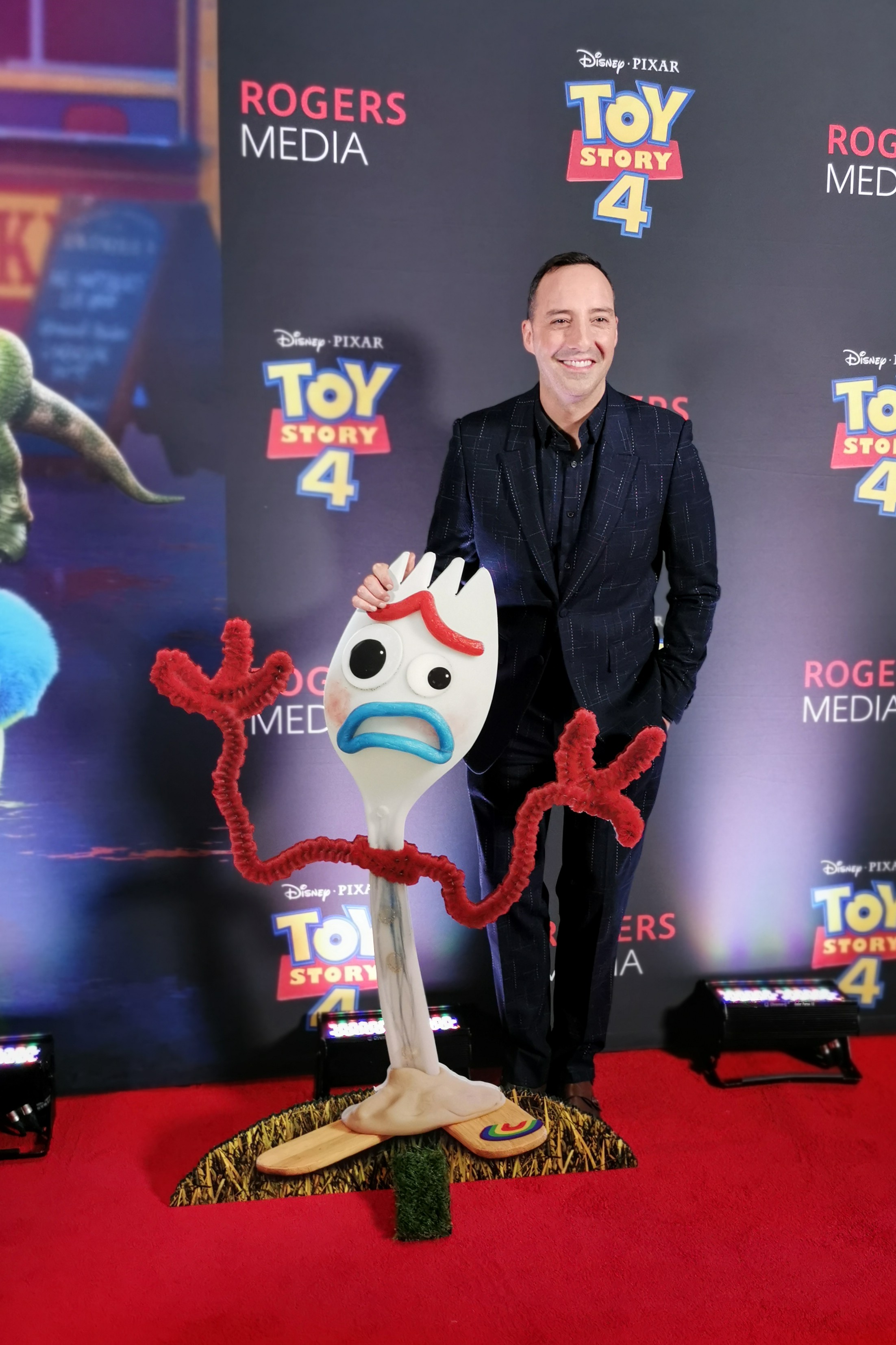 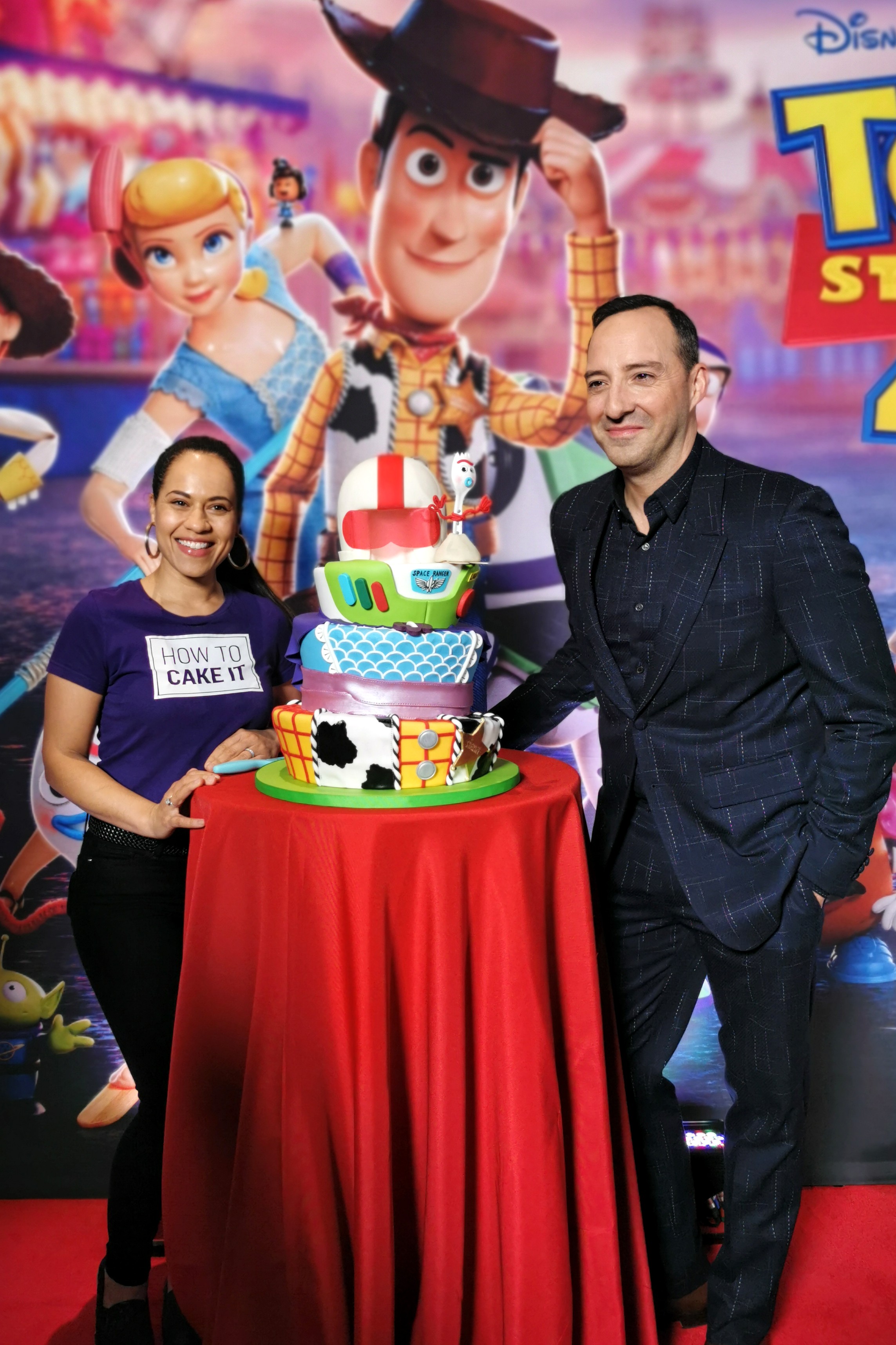 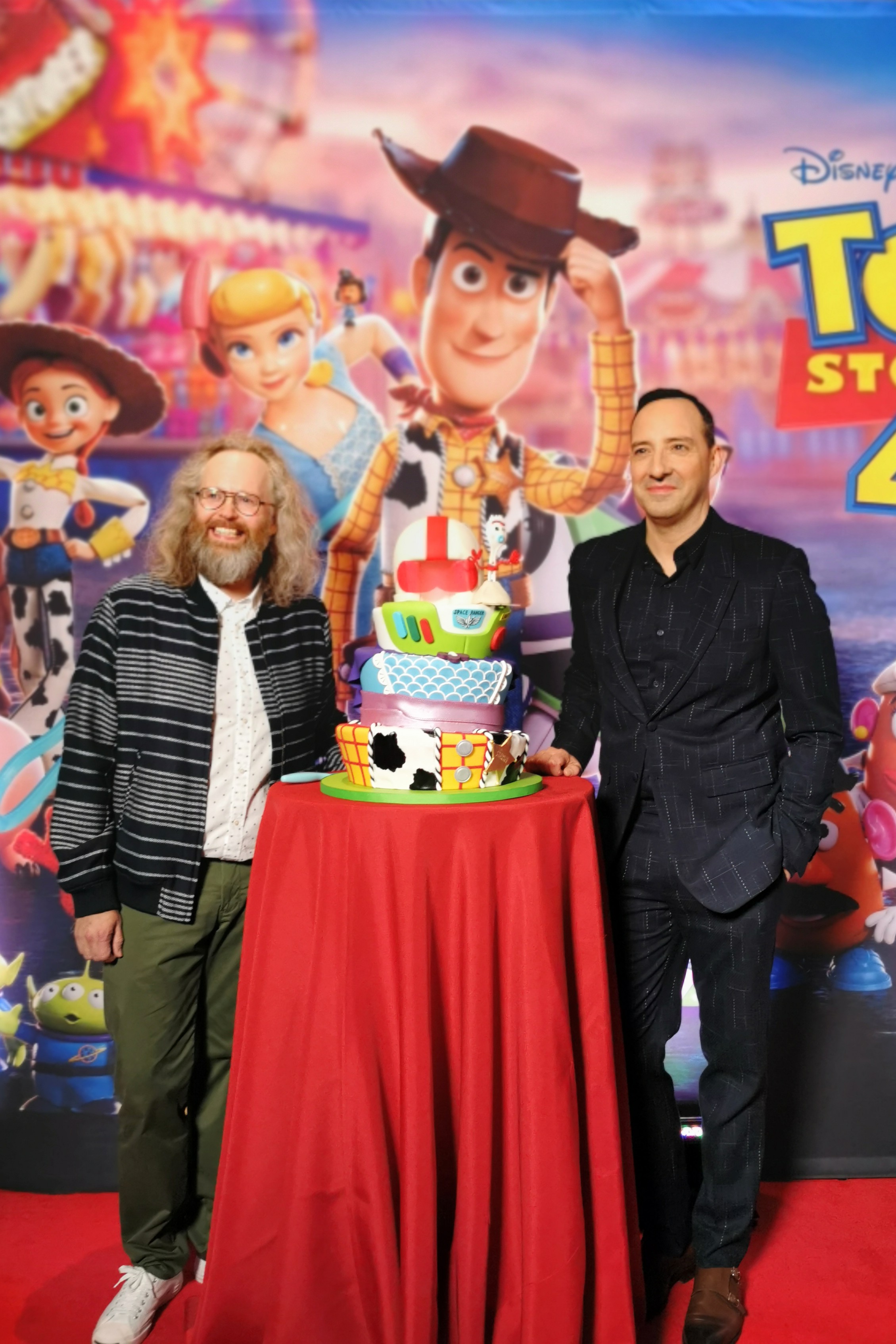 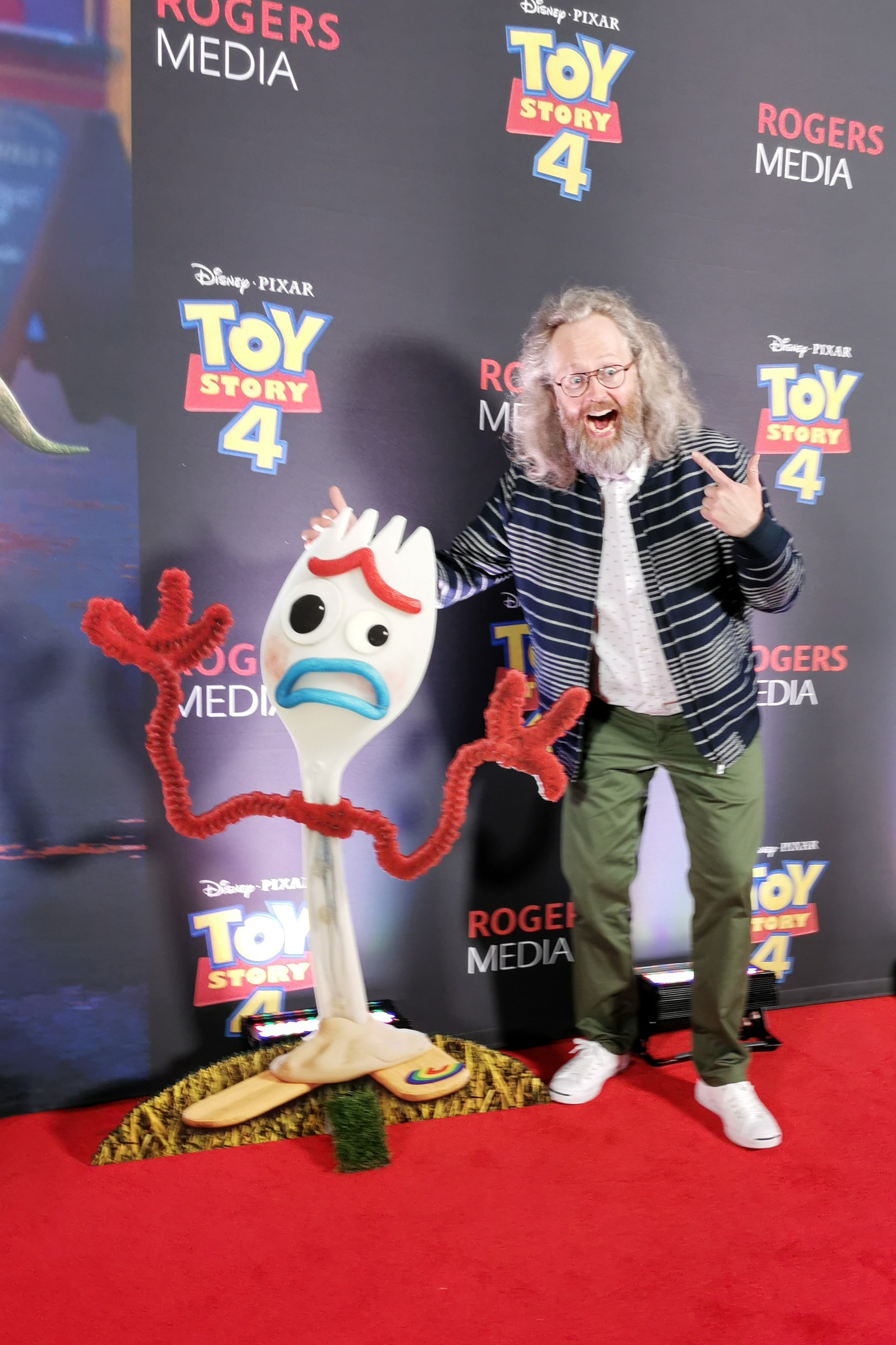 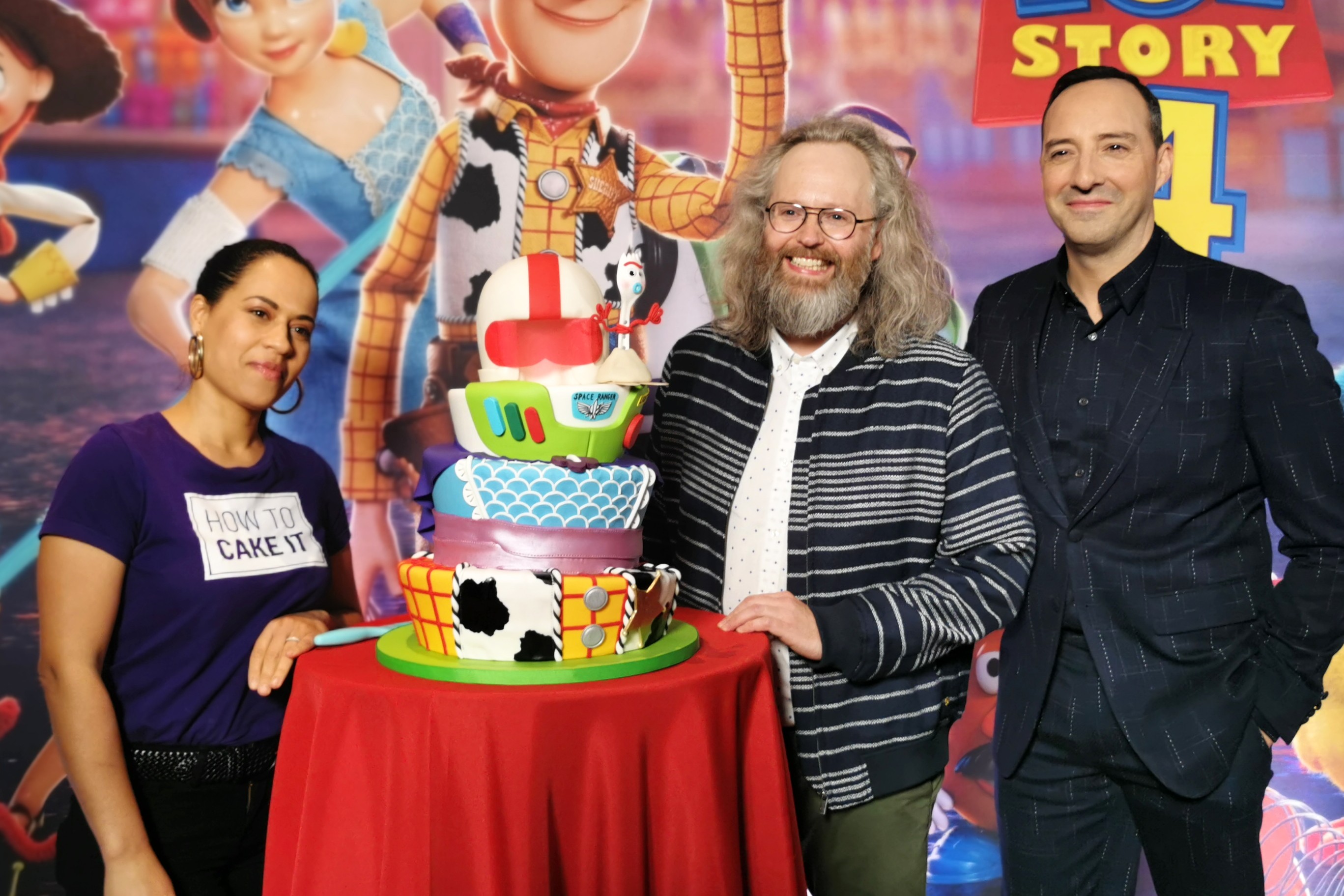 In addition to seeing a real-life replica of Duke Caboom‘s bike, he also got to make our own Forkys! Check it out! Hover cursor right to move forward on the album:

An amazing chat with Primetime Emmy winner #TonyHale, in #Toronto for the Canadian Premiere of #ToyStory4. You will all fall in love with his character #Forky! Hale complimented me on my skin. What?! We not only got to make our own #Forky, but also got to see a replica of #KeanuReeves’ character #DukeCaboom’s bike from #Pixar!