We welcome a return to big Blockbusters this Summer as our theatres re-open once again. Disney’s JUNGLE CRUISE is a must-watch for many. Our patience finally has paid off as it arrives later this week in theatres and at home!

The nostalgic Action-Fantasy-Romance directed by Jaume Collet-Serra (Orphan, The Shallows), is inspired by the iconic Disneyland ride, taking us on an expedition through the Amazon jungle with Lily (Emily Blunt), who is an adventurous explorer on a mission to find the Tear of the Moon, which is said to have great healing powers, and Frank (Dwayne Johnson), a charming riverboat captain. Despite their differences, these two find themselves forming an unlikely bond as they fight to escape some deadly obstacles.

We had the joy of partaking in the global Press Conference for Disney’s JUNGLE CRUISE and joining us were stars:


One of the most remarkable things about the Film is the warm chemistry shared by its leads Dwayne Johnson and Emily Blunt.

Blunt: I knew when we met we had this immediate rapport when we went back and forth so quickly and I knew we’d have a good time.

Johnson: It’s true and then you hope to get lucky and you like your Cast and you hope to have some chemistry. Emily and I have been talking a lot about chemistry these past couple weeks doing Press. And a lot of times you fake it because you’re acting.

Blunt: He’s been faking it for years!

Johnson: And I continue to fake it too, especially with us! (laughs)

Johnson said ‘yes’ immediately to the project, whereas Blunt notoriously ‘ghosted’ him after approaching her with a video proposal, really needing time to evaluate the Script before signing aboard. She chalks her approach to British manners. Johnson tells us what drew him most to the project, on which he served also as an Executive Producer.

Johnson: Well, the Script was in a really good place and I immediately saw the potential of the opportunity and that opportunity was to take an iconic and beloved Disney ride since 1955 when the theme park opened, this was Walt Disney‘s baby. And there were a lot of elements I felt comfortable saying ‘Yes, I will come onboard and I will partner with you and develop this thing’, and our next job was finding our Director and finding my Co-Star – the female Indiana Jones over here, which she hates because it’s setting her up and too much pressure!

Édgar Ramirez stars as misunderstood villain Aguirre in this his first Disney movie. Without spoilers, he dons an iconic look.

Ramirez: I was just happy those snakes weren’t near me anywhere in the shoot because I’m afraid of snakes. We shot in real locations and dressed them to look like the Amazon. I come from an Amazonian country and saw the Movie for the first time two days ago at the Premiere and guys, I’m so happy! You guys were incredible!

Blunt: You were this operatic bad guy, I loved it! And when we were shooting, you were like, ‘My mother’s gonna be so upset!’.

Ramirez: And she was! She’s super-afraid of snakes. She said, ‘Why didn’t you tell me? Like I missed half of your performance because I couldn’t look at you because of the snakes!’. But I’m happy my mother was super-scared!

To be in a movie that is based on the most iconic attraction for the most iconic entertainment universe in history such as Disney is so special. And to be with these amazing people, it’s so incredible.

The Cast are asked about their most challenging stunts in the Film which has more than a few hold-your-breath moments.

Johnson: It was that heroic vine-swing that you think the hero grabs the lady and takes off and goes to save the day. And of course it goes to hell because I don’t save the day!

Blunt: Every time I was just, ‘Tell me what you’re going to say this time just so I can be prepared’ and every time he’d throw in some awful improv that would make me laugh. I don’t know how many times we must have shot that!

Johnson: For me personally, a lot of the action with the Conquistadors, Edgar and his partners that was pretty challenging. Because these guys were dressed how they were dressed in their costumes and also fighting men who can’t die. Oh! I just ruined the Movie for you! (laughs) So they fight in a different way, with a confidence. 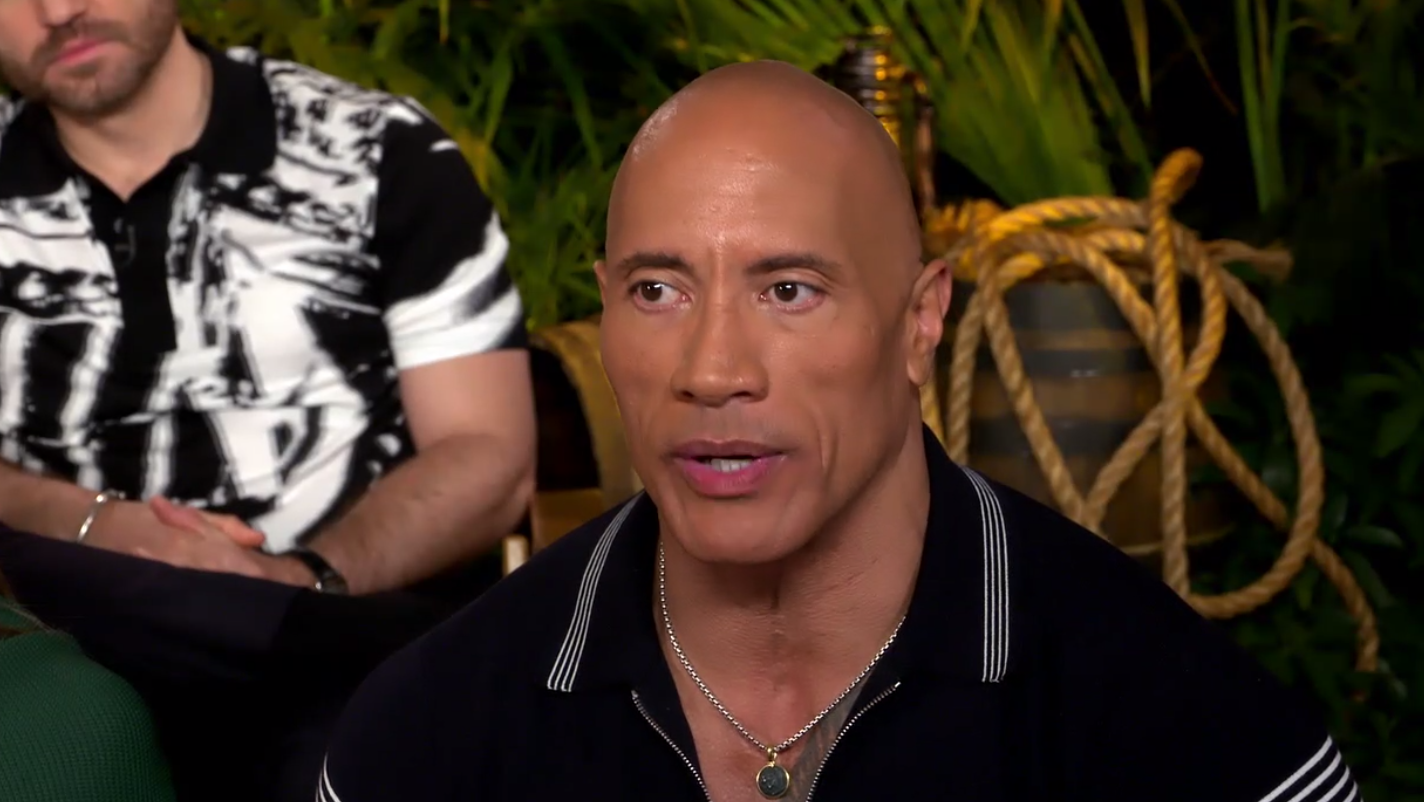 Jack Whitehall is full of witty one-liners in Disney’s Jungle Cruise, as Lily‘s brother MacGregor. Would you believe he had one line in Frozen, which got cut entirely?

Whitehall: Post the Frozen experience, I felt this was just a case of throwing enough stuff at the wall and something sticking because I was just desperate not to be cut from a movie. (laughs) The fact that there’s a single line in there is an improvement on the Frozen debacle and I’m so excited to actually have a speaking part in a Disney movie.

The Script was amazing, but we were given the space to improvise and add stuff to it. And these two created this environment where we were able to do that. It felt like such a safe space. There are probably a few jokes that ended-up on the cutting room floor for the right reasons. Some of the great moments that you see are genuine moments that we came up with in the Movie. And Jaume was so good at encouraging that as well.

Blunt is asked if she is closer in real life to another iconic Disney character she’s played, Mary Poppins or Lily?

Blunt: I’m probably a little closer to Lily. I feel like Lily’s sorta more of a mess. Poppins is so pulled-together and perfected and I don’t feel I walk through life that way, so I’d say Lily.

The Cast are asked what it is like to revitalize something so iconic for a new generation.

Blunt: It has been immensely rewarding. To what Edgar was talking about, we really needed tonally to strike a chord that was really well-crafted, and that we curated with so much love and that it was made in the spirit of the films we all grew-up watching. I mainlined those movies into my veins, I just loved Indiana Jones, Romancing the Stone and African Queen. They are just joy-bombs and nostalgic. I think we just needed to pierce people’s hearts directly with the spirit of those films we all loved as children and it just took a lot of tempering and beautiful conducing from Jaume who was just extraordinarily free-spirited with us in this massive spectacle of a movie. He’s such a world builder.

When we both met Jaume, we both asked him the same question, ‘So what do you feel this movie is about?’ and I always ask that when I sign-on because I want to know what the movie’s about. And he goes, “You know, it’s about love”. And it was so perfect because you could’ve talked about all the action and the spectacle, the legends and all that, but that’s when I knew in Jaume that we had an innate romantic and a world-builder. And that’s what you need for this type of movie.