#HORSERACING: “UP WITH THE BIRDS” WINS HORSE OF THE YEAR AT THE 39TH ANNUAL SOVEREIGN AWARDS

The Stars of Canadian Thoroughbred Racing were honoured tonight at Woodbine Racetrack.  The 39th annual Sovereign Awards brought together Key Figures in the Sport from across the Country in celebration of the 2013 Racing Season. Everyone ranging from the Media, Jockeys, Owners, Breeders to the Horses were fêted in what was noted as the best-attended edition of the Awards Ceremony in recent years.

Crowned Top Honour tonight was Sam-Son Farms‘ Up with the Birds, who ran a dynamite second in the Queen’s Plate last Season, before going-on the win the third leg of Canada’s Triple Crown, the Breeders’ Stakes.  He then solidified his cause with a triumph at New York’s Belmont Park in the Grade 1 Jamaica Handicap. In addition, he took home the Award for Champion Three-Year-Old Male tonight, while his famed Owner and Breeder won Outstanding Breeder. Rick Balaz was on-hand to accept the Honour.

Up with the Birds’ regular Rider Eurico Da Silva also was crowned the Country’s most Outstanding Jockey. Playing on his Brazilian background, he started his spirited Acceptance Speech saying “No English”, before eloquently going-on to thank a list of Trainers and fellow Jockeys to whom he attributes his success. Even he acknowledged his Season wasn’t perfect, admitting his disappointment at narrowly losing the Country’s most prestigious Race, the Queen’s Plate, aboard Up with the Birds. Certainly Sovereign Award Voters were more than willing to overlook that one small blemish on both accounts.

Ottawa Senators Chairman Eugene Melnyk also was on-hand to accept Champion Three-Year-Old Female for the hard-trying Leigh Court, inviting those in attendance to go to Barbados to relax with him. “I’d never date her. She’s actually quite nasty”, he reveals about his Champion Filly, before declaring her love for Peppermints. “Those for Horses are equivalent to Diamonds and Women love Diamonds”, he analogizes.

Although not present, Mark Casse once again was named Outstanding Trainer in Canada. He currently is Kentucky prepping for tomorrow’s Grade 1 Blue Grass Stakes at Keeneland, where he currently is riding a Hot Streak.

Full and complete Stats on all of tonight’s Winners are available right here.

I had the pleasure not only of attending and covering the prestigious Sovereign Awards, but also presenting at them in the Category of Digital/Video Broadcast, won by our Friends at Woodbine Entertainment of the 2013 Ricoh Woodbine Mile.  Coincidentally, two-time North American Horse of the Year, Wise Dan, who won that Race last September won again today at Keeneland in his 2014 Return!

I even took a Selfie on-stage: 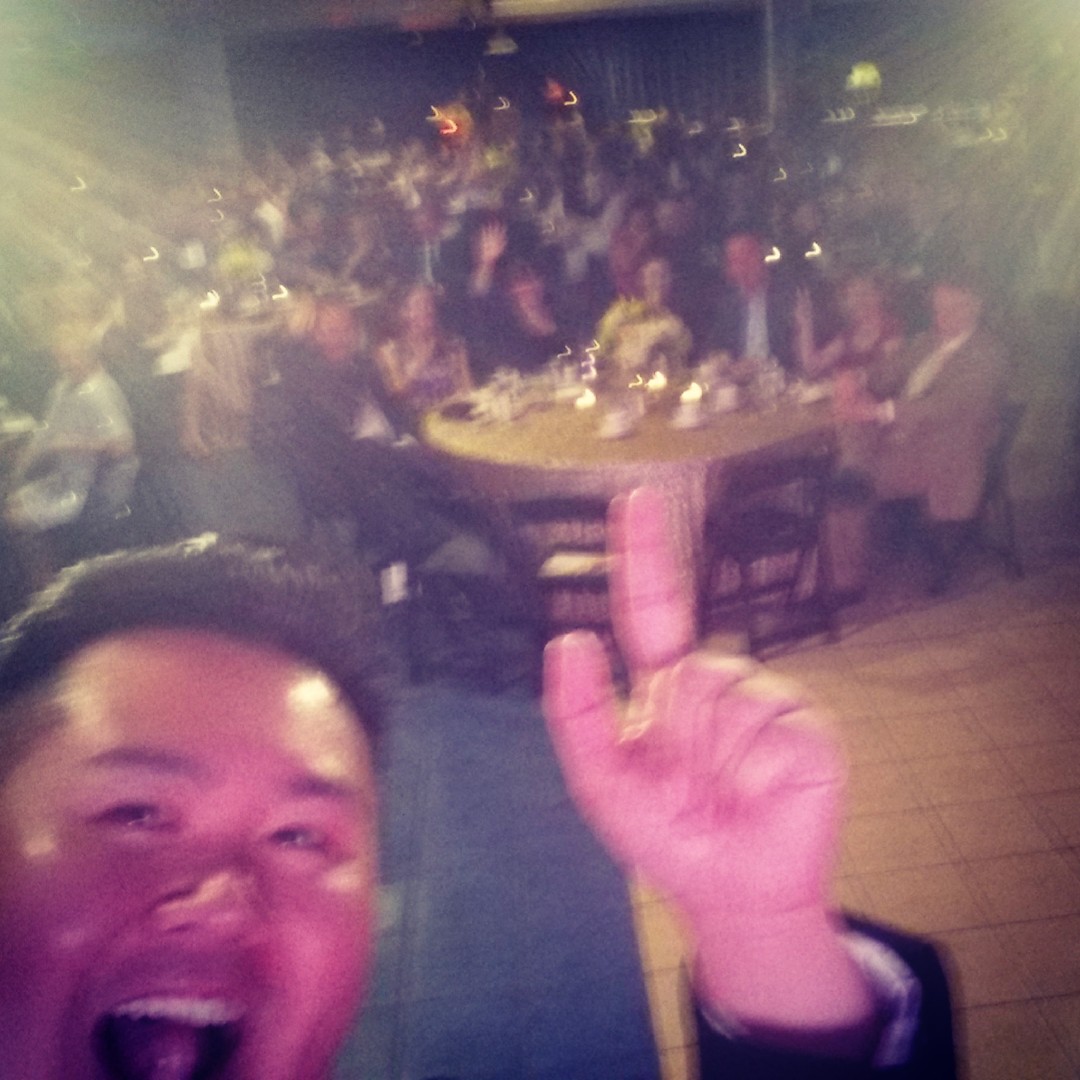 Prior to the Awards, I was able to have a quick Chat with several of tonight’s Jockey Nominees including: Luis Contreras, Skye Chernetz (Winner, Outstanding Apprentice – she was wearing a Dress by Original), Rico Walcott, Tommy Wong, Amie Pooli, Justin Stein and of course, Outstanding Jockey Winner Da Silva.  Want to see what they were up to this Winter and what’s coming next?

A complete Gallery of Photos I snapped are available exclusively at Woodbine Racetrack‘s Official Facebook Page right here.  Enjoy!
Until next year…
The 2014 Racing Season at Woodbine Racetrack begins today, Saturday, April 12, 2014!  Make it your goal to make this yours!  And be sure to try-out the Favourites Dining Room‘s amazing Buffet! See you at the Races!
(Photo/video credit: Mr. Will Wong)
woodbine