#HORSERACING: AN EARLY GLIMPSE AT THE CONTENDERS FOR THE 2014 KENTUCKY DERBY!

Now in its 140th edition, the First Saturday in May forever holds  deep significance in American Culture.  This of course is the day that the $2-million Kentucky Derby is raced at Churchill Downs.  If you’ve never watched a Horse Race before, this would be your perfect introduction to the Sport.  The Celebrities, the Fashion and the Sport all are married together in one glamorous Affair.  Celebrities like Jessica Simpson, Elizabeth Banks, Kim Kardashian, Diane Lane, Nicole Richie, Jenny McCarthy and many, many more are among the Exclusive to have partied with the Ponies on Derby Day!

This year, there are 23 Contenders for the Kentucky Derby, headed by West Coast-based Favourite California Chrome, who comes-off a big win in the Santa Anita Derby under the guidance of Jockey Victor Espinoza.  Although his Pedigree doesn’t suggest immediately that he’s mile-and-a-quarter (the distance of the Kentucky Derby) material – his Father Lucky Pulpit was at best a Sprinter and his Mom Love the Chase raced among lower-level competition – California Chrome has a devout following and rightfully as earned the Title as the Race Favourite. In a courageous ten-start Career, has seen the Winner’s Circle six times for Owners Steve Coburn and Martin Perry (whom both still work day jobs), with a total $1.13 million in earnings. Expect him to be  up-front early.

The Run for the Roses – as the Race affectionately is called with the Winner traditionally adorned in a blanket of roses – sees several other strong Contenders for those looking for a bit more value on their $2 bets.  In fact, Favourites more often lose than win the Race and in the last ten years, the Betting Public got it right three times with Smarty Jones, Big Brown and Orb all being victorious. Former Canadian Champion (and Woodbine-raced) Mine that Bird scored a gigantic upset in 2009, paying a monstrous $103.20 on a $2 investment.

Louisiana-based Vicar’s in Trouble comes into the Kentucky Derby as a major Contender with a win in late March’s Louisiana Derby.  He is ridden by Rosie Napravnik, who is looking to be the first-ever female Jockey to win this Race and it could well be her year as popular Owners Kenneth & Sarah Ramsey have given her a vote of confidence. In five starts only, he’s won three times and certainly is fresh with $788k in earnings.

Wicked Strong will be representing New York, arriving off a solid win in the Wood Memorial at Aqueduct Racetrack early April.  He’s raced six times, winning twice and banking over $700k for Centennial Farms.  Indo-Jamaican Jockey Rajiv Maragh piloted him to his last big win and will be returning again in what could be his biggest race.

Fans of  ’80s Sitcom Who’s The Boss won’t want to overlook Danza, named after Actor Tony Danza.  The Son of Street Boss thundered through the rail to win the Arkansas Derby mid-April at Oaklawn Park, beating a much-buzzed Rideoncurlin.  He’s likely to be ridden by Joe Bravo and is trained by four-time-consecutive Eclipse Award-winning Trainer, Todd Pletcher.  In only four starts, he’s grossed over $600k in earnings.

Hoppertunity not only has perhaps one of the catchiest names in the Field, but the well-travelled Son of Any Given Saturday appears also to be peaking at the right time, losing narrowly the Race Favourite California Chrome in the Santa Anita Derby.  Jockey Mike Smith certainly is no stranger to winning when the glory is on-the-line, notably five American Classic Races (including the Kentucky Derby in 2005), and 20 Breeders’ Cup Races. More famously, he piloted one of the greatest Female Racehorses of all time, Zenyatta to a Breeders’ Cup Classic Win in 2009.

Canada has one hope with We Miss Artie, born in Ontario and eligible for July’s Queen’s Plate at Woodbine Racetrack, entering off a heart-stopping win in the Spiral Stakes at Turfway Park late March.  Leading Rider Javier Castellano will be handling him for the Kentucky Derby; he is owned too by Kenneth & Sarah Ramsey.

Meet the Contenders here at the official Kentucky Derby Website!

And let’s not forget the Ladies!  The 140th edition of the Kentucky Oaks, the Sister Race to the Kentucky Derby, will be raced this Friday with Untapable coming-in off two amazing wins, crushing her Competition by a combined 16-plus lengths.  Napravnik will be piloting her in the Race, which also contains California’s Star Filly Fashion Plate who reigned supreme earlier this month in the Santa Anita Oaks under Hall-of-Fame Jockey Gary Stevens. Canada’s reigning Champion 2-year-old Filly, Ria Antonia, also will make her presence felt, seeing the benefits of having Smith aboard. Pop Culture Fanatics will find something to root for too perhaps with the well-travelled Fiftyshadesofgold.

Throwing a Kentucky Derby Party at home?  It certainly wouldn’t be complete without a refreshing Mint Julep.

Learn how to make one right here! 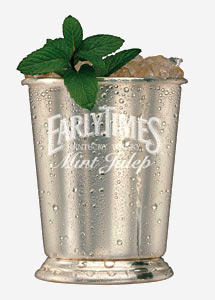 Click here to cancel reply.
#BOXOFFICE: “THE OTHER WOMAN” IS THE LEADING LADY AT BOX OFFICE
#GIVEAWAY: ENTER TO WIN TICKETS TO THE ADVANCE SCREENING OF “BLENDED” STARRING ADAM SANDLER + DREW BARRYMORE!