We had the sheer joy of experiencing the $1.75 million 2015 Haskell Invitational in-person at Monmouth Park. With crowds reaching record attendance (60k+) and fans hoping for a chance to witness a piece of history in star entrant American Pharoah – the first horse to win the American Triple Crown in 37 years –  New Jersey Transit pulled-out all precautions needed, adding service to the Racetrack on four more routes.

The vibe was festive as several families planted themselves trackside for an exhilarating afternoon of races. Baseball caps commemorating the race were handed out, food trucks were parked and the afternoon would place the exciting undercard front and center, with jockey Paco Lopez boasting four wins.

This year’s renewal of the Haskell Invitational was full of star power. In addition to American Pharoah being the first American Triple Crown winner in 37 years as a primary draw, stars were scattered throughout every corner of the facility, which rings with a charm of another era. Rumours spread that Bruce Springsteen, Eli Manning, Michael Jordan and Derek Jeter were milling about, although physically we saw Bon Jovi‘s Richie Sambora and a Haskell “Riders Up” call by none other than Bill Murray! Despite the Paddock area being open much of the day to Media, a mass exodus was done prior to the Haskell, with only a select few granted access due to some of the high profile types in attendance.

At 5:45 PM EST, the main event would run, but not without Jersey darling Springsteen‘s Born to Run blaring as the field came onto the Track. Cheers were deafening for American Pharoah, an elegant, lean and unsuspecting bay colt who would capture the heart of a nation. Not to take anything away from his peers, but the man of the hour certainly was jockey Victor Espinosa, riding a late career Renaissance piloting back-to-back Kentucky Derby winners and presumably Horse of the Year honours two years in-a-row (last year with California Chrome). The race would go off without a hitch and American Pharoah would rate just off the pace before making a sweeping move into the final turn, winning effortlessly in a quick 1:47.9 for 1 1/8 miles.

The post-race festivities were grand. American Pharoah would be paraded out after his victory, causing a bumpy frenzy of photography – some who came as far as Australia to cover the race. What ensued next looked like hundreds of people crammed into the compact Winner’s Enclosure as trainer Bob Baffert spoke to the Media for a minute before appearing at a Press Conference with winning owners, Zayat Stables LLC and rider, Espinoza.

The experience will not be forgotten. Let’s relive the 2015 Haskell Invitational through a series of our Photos!

#AmericanPharoah resting up in Barn 12 for #Haskell2015 later today! #BetWoodbine #MonmouthPark #HorseRacing #GetintheGame A photo posted by Woodbine Racetrack (@woodbineracing) on Aug 2, 2015 at 9:37am PDT

The secret is out! GOT LUCKY (#APIndy) steals the show in the Lady’s Secret for Todd Pletcher, under Paco Lopez! #GetintheGame #Haskell2015 #HorseRacing #BetWoodbine A photo posted by Woodbine Racetrack (@woodbineracing) on Aug 2, 2015 at 10:23am PDT

Ahh, there’s a sight for sore eyes. We miss #HearttoHeart. Here he is heading off to run in the Oceanport Cup; #VictorEspinoza aboard. #Haskell2015 #GetintheGame #HorseRacing #BetWoodbine A photo posted by Woodbine Racetrack (@woodbineracing) on Aug 2, 2015 at 2:04pm PDT

So cool meeting pride of #NewJersey, #RichieSambora of #BonJovi at #Haskell2015!

Congrats to @JustinZayat of Zayat Stables, which owns #AmericanPharoah. #Haskell2015 A photo posted by Mr. Will Wong (@mrwillwong) on Aug 2, 2015 at 4:41pm PDT

Thank you for all your engagement @WoodbineRacing Fans! And congrats to @MonmouthPark on record-breaking numbers today at #Haskell2015! #BetWoodbine – Mr. Will – A photo posted by Woodbine Racetrack (@woodbineracing) on Aug 2, 2015 at 4:21pm PDT

And of course we never leave you guys empty-handed!  How about an official 2015 Haskell Invtational program signed by Victor Espinoza, jockey of American Pharoah? 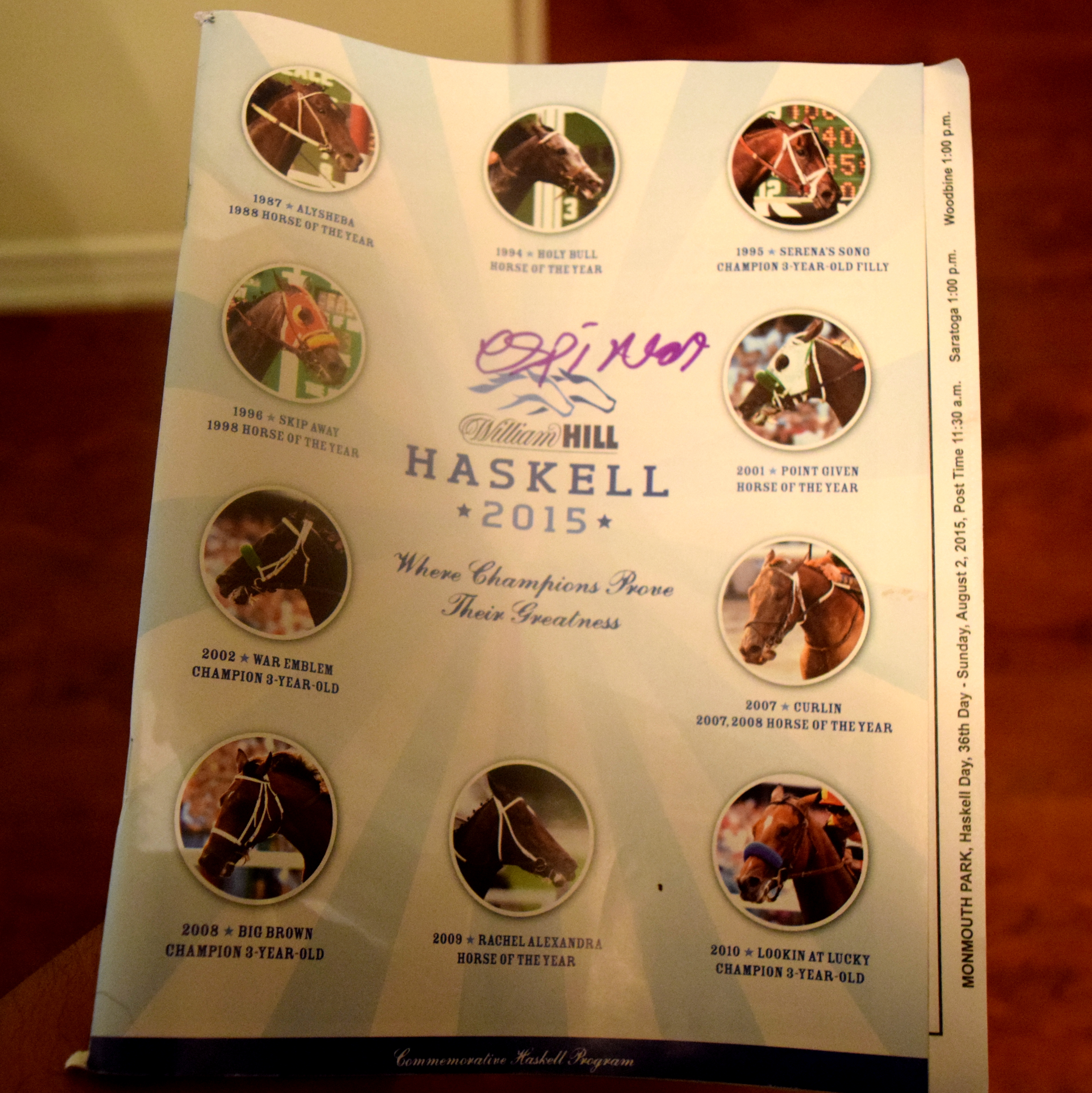