There is nothing I enjoy more than a good meal and when I discover good food, I love to share it. After making a splash on the West Coast in 2006, Kingyo Izakaya recently debuted in Toronto and our City’s pickiest Foodies are impressed.  The thought of Japanese Cuisine often conjures images of raw Fish and Bento Boxes and understandably, not everyone is a Fan. Kingyo‘s Menu, helmed by Chef Koji Zenimaru, is so much, much more. And in addition to Toronto’s Ramen Rage, Izakayas are not to be relegated to Side Show status.

What is an Izakaya, you ask?  If you haven’t already braved the two-hour-long waits to get into Hotspot Guu Izakaya (one at Church x Gerrard, one in The Annex) already, then you probably haven’t yet experience these establishments’ super-friendly atmosphere where everyone who enters is met with cheers as you come and go. Think  – a Pub which is more Food and Snack-centric; the Food choices are rather exquisite and if you ask me, Kingyo really steps-it-up a notch in terms of fanciness to a level others haven’t quite gone locally.

Tucked away in Cabbagetown, the dimly-lit Spot offers much more moving room than say, Guu.  Overall is a more comfortable dining experience.  I could not keep my eyes off the Television Screen as it played odd Japanese Sci-Fi Series from another era and Staff were attentive and friendly even if they multiple times brought wrong orders to our table.  Just once we hoped we’d actually get to eat them before they realized their mistakes!

I was wowed by their delicate Hamachi Yellow Tail Sashimi,  delighted by their Ebi-Mayo (Deep-fried Shrimp drizzled in Chili-Mayo Sauce), mesmerized by rich-flavoured Miso Broth Stew and absolutely floored by the gooey Mr. Sada’s Sea Urchin Shooter ($8 a pop). Although I’m laying-off Meats these days, I picked-off the pieces in their Beef Tataki Salad with Ume (Sour Plum) Dressing and still enjoyed its immense flavour and my Friends savoured The Legendary Chicken Wings by “Kinchan”, complete with some fancy expand-before-your-eyes Wet-Naps.  Sushi Selections were okay, but I’d save the appetite for a proper Sushi Shop.

Admittedly I’m iffy on often-bland Asian Desserts, myself much preferring a traditional sugary and frosted chunk of Cake, but Kingyo‘s 2 Color Almond Tofu impressed me so and hours later, I find myself craving that delicious Amaretto and Blueberry-heavy confection already.

Kingyo, King of Izakayas in Toronto.  They are situated at 51B Winchester St.  Website here.

See some offerings from their Menu: 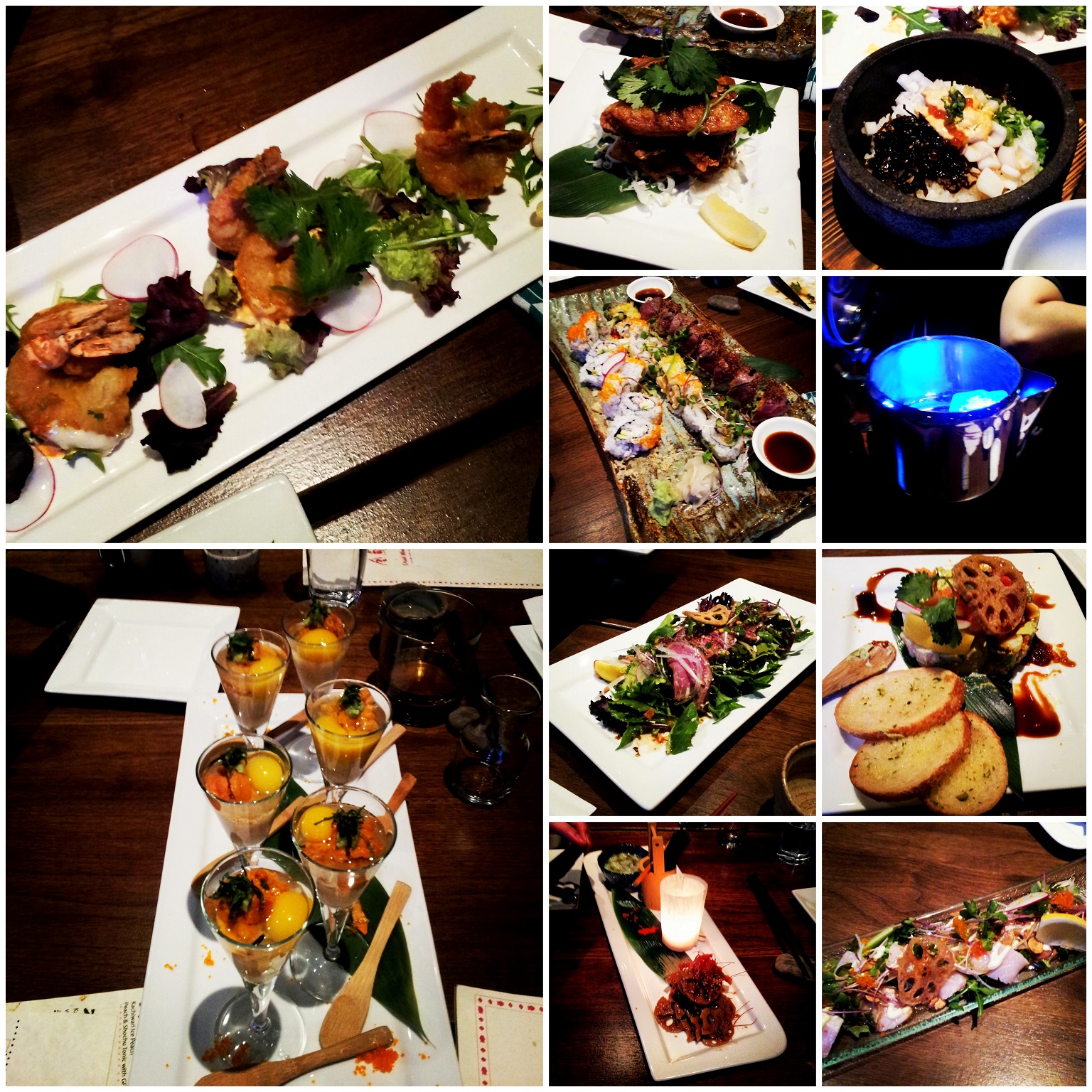 Click here to cancel reply.
#BOXOFFICE: “OZ” IS GREAT AND POWERFUL AT BOX OFFICE
#NEWMUSIC: NEW KIDS ON THE BLOCK INK DEAL WITH UNIVERSAL MUSIC CANADA | NEW SINGLE: “REMIX ( I LIKE THE)”