I arrive extremely early for my One-on-One with Baz Luhrmann, sitting at the Hospitality Suite with plenty of time to spare. You see, Toronto has a horrible issue with Punctuality and I am convinced that I am one of the reasons why. The bottomless Coffee makes me even more anxious than I already am.  I nibble on some v. sharp cheese, but really am not hungry due to nerves. Ever since being invited earlier this week to interview the visionary Filmmaker,  excitement and distraction had preoccupied much of my headspace. The thing is, I legitimately am a huge Fan of Luhrmann and quite literally I  had to touch my neck to see if it still was sore (as has been the case for weeks) in search of evidence that I wasn’t dreaming after receiving the invitation. I’d close the e-mail, open it again repeatedly to ensure it wouldn’t disappear on me like a cruel prank, as if almost expecting  that sobering “XX would like to recall this message”  notification.  It never came, thankfully.

Few Directors consistently have affected me viscerally as Luhrmann.  His Films are a Spectacle – an Escape if you will – taking us away to a place where Love is magical, splendorous and truly romantic. His distinct sense of  Tragic Romance almost has come define him, hence there could be no other as fitting as he to  helm an Adaptation of  F. Scott Fitzgerald‘s bittersweet Classic, The Great Gatsby.

Luhrmann walks into the room as I sit there fidgeting with my pencil – double, triple, quadruple-checking to ensure my questions were of a standard fit for the Man from whom the likes of Claire Danes, Ewan McGregor, Hugh Jackman, Nicole Kidman and Leonardo DiCaprio have taken direction. He is lovely Man, indeed.  His hair a bit grayer than I’d seen in photos –  not at all as imposing as I’d imagined for someone with such grand, extravagant vision; his demeanour personable. I felt right at ease, feeling rather foolish for all the hoo-ha I’d conjured in my mind. “I’ll just sit right here on the couch and you can direct me”, he says with a smile. Was he kidding me? The Man responsible for Films like Moulin Rouge, Australia and Romeo + Juliet telling me to direct him?

I asked Luhrmann the question on many of our minds after we so cruelly were made to endure a prolonged wait for The Great Gatsby‘s release, originally slated for December.  Some cited Studio Conflict, while some cited Funding issues.  Setting the record straight, he explains “We got rained-out five times – it wasn’t just once or twice. It put us into the following year. We had to shut down just because of the rain.”.  After also being struck in the head by a crane during production, which resulted in stitches, he comes to the realization, “Now if there was no rain, it would’ve been the first time in my life I was on-time because we were very prepared in what we were doing.”.

Two ever-prevalent themes in Luhrmann‘s Films – particularly his Red Curtain Trilogy and  consistently so again in The Great Gatsby – are Romance and Tragedy.   “I keep saying to myself how I end up doing these things.  If you look at any creative person – I suppose I’m old enough now to say ‘I am creative’,    really we all do the same things over and over in different ways and different flavours”, he tells me. “Puccini basically does a lot of Tragic Romances. Shakespeare changes the genres but he always has some idea of Love or Anti-Love… I guess I’m some sort of Romantic. I suppose I have to say ‘yes’ to that  now.”.

One key line in The Great Gatsby has Nick Caraway (Tobey Maguire) telling Jay Gatsby (Leonardo DiCaprio), “The past cannot be repeated”. Reliving the past becomes somewhat of a fixation for  Gatsby in his limitless ambition to win back the love of his life in Daisy Buchanan (Carey Mulligan), who so happens to be married to Tom Buchanan (Joel Edgerton) after he goes off to war, coming back re-incarnated as a wealthy, dashing Playboy. I am curious whether or not repeating the past – a largely successful one I might add – is something  of which Luhrmann is conscious.  “I always think this is it. This is the last Movie I’m making… I may just go into Architecture or Diving”, he says perhaps half-joking. “I think I’ve gone through the Catharsis of Gatsby. I think I’ve gone into this period where I actually am who I am – that I sorta am stuck being this Guy making those Movies.”.  “I want to do it now so that it enriches life and that it’s a Circle –  the give and take is there.”.

Several are excited about DiCaprio‘s Gatsby Reunion with Luhrmann, last having worked together over 17 years ago on Romeo + Juliet, but the name on everybody’s lips is Elizabeth Debicki – an unknown entity in an Ensemble of familiarity, winning the Plum Role of  observant and gossipy Jordan Baker. “This is the first Movie she’s ever done – she was in Drama School.  My Casting Director Ronna Kress and I heard about Elizabeth –  this Girl who’s so tall and gorgeous – she’s a bit like Cate Blanchett meets Nicole (Kidman). I flew her to Los Angeles and she was such a strong choice.”.  As numerical proof to what a role in a Baz Luhrmann Film can do for one’s Career, he notes, “They put a picture of her on the Website the other day… and within an hour there were 150,000 hits. She’s making an impression.”.  On Mulligan, he has nothing but praise for her stating, “She’s just absolutely lovely inside and out!”.

In a Career which already has seen its share of pinnacles, one must wonder just what Luhrmann considers a success. He replies, “That it pays its bill, first of all. People come up to me and they go, ‘I bet you’re sick of hearing this’ – and they can be entirely mature Human Beings – or ‘You probably don’t want to hear this but I just loved blah blah blah‘ and I just go, ‘Are you kidding me?’.”. Luhrmann adds, “My Movies don’t get banged-out once a year. I make them every five or ten years, so if one person goes ‘Gee, that did something for my life, that was beautiful…’, he pauses. “That sorta stuff that will be good enough for me.”.

Enjoy my Interview in full with Baz Luhrmann below:

Fans have every reason to be excited about The Great Gatsby  and after having witnessed its magic in 3D, I eagerly am awaiting another go at it.  Warner Bros. releases on Friday, May 10, 2013. 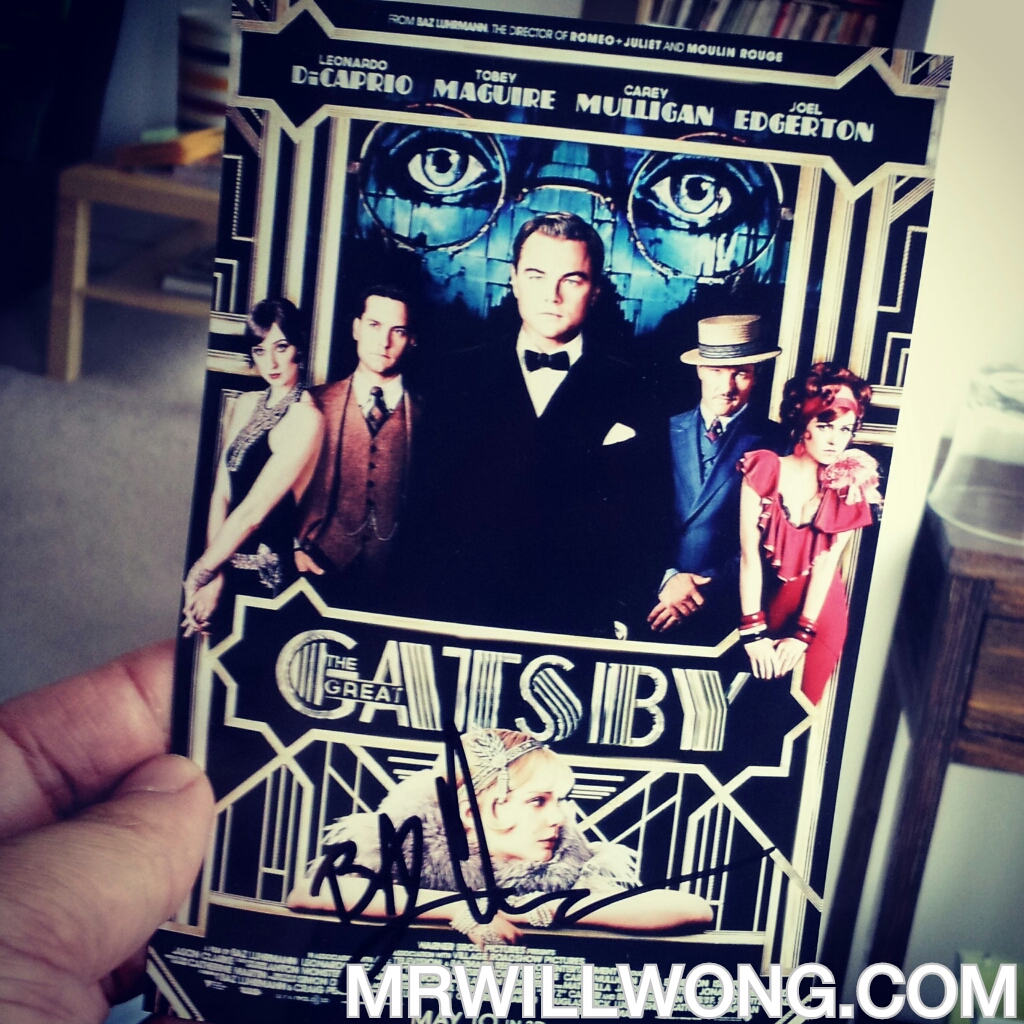