Since 1978, The Cheesecake Factory has been exciting tastebuds throughout the United States. Tallying-in at a total 209 locations worldwide and its first ever location set to open in Canada at Yorkdale Shopping Centre, calling the Brand created by David Overton a success story would be an understatement.  Many of us have ourselves or at least know that one friend or family member who treks across the border with the specific intent of splurging on their generously-portioned entrées and signature Cheesecakes of course. Gas is expensive these days, isn’t it? Brace for your delicious dreams finally to become a reality next week, Toronto!

We were among the select media outlets and influencers lucky enough to be invited to preview the hotly-buzzed establishment recently. Believe us, it was a privilege we cherish with many trying to land a spot at the opportunity for a taste.

The Toronto menu boasts an impressive 250+ dishes, plus 50 legendary desserts and Cheesecakes.  If there ever was a doubt that Canadians might be getting any less of an experience, founder Overton and several staff including the Franchise’s PR Director Alethea Rowe traveled into the City to ensure that same high standard synonymous with the Brand is attained locally.  We were told that The Cheesecake Factory‘s original Lighting Guru was on-site helping fine-tune that customer experience with precision.  Playlists even are chosen and are uniform across all locations. Despite the many calculations involved, sitting at the Yorkdale location felt seamless and organic.

We admit, we’ve only had their Cheesecake, which can be found at luxury grocers like Pusateri’s in-and-around the City. We’ve long desired to have a proper sit-down meal here and finally got our wish.  To say we were impressed does not do justice to the experience. Nope.  It’s rare you walk into a restaurant and the staff give off a genuine air of pride letting you know they are working for a great place and we felt exactly this.  In fact, it is little wonder seeing this knowing that The Cheesecake Factory is ranked within the the “100 Best Companies to Work For” by Fortune Magazine. Whether they be behind the cake counter or serving us at our table, team members were keen to offer recommendations when asked and so incredibly attentive.  One of our servers who trekked all the way from Queens, New York to help launch the Restaurant,  was helping shadow our official server-in-training. Both had opinions on what they loved most and they meant it.  They agreed however The Cheesecake Factory does salmon just right and we admit we rather enjoyed their recommendation, Miso Salmon – sweet and umami over a bed of sticky white rice. Our only wish was for just a few more greens on the plate but we were satisfied!

Let’s talk appetizers. The Cheesecake Factory‘s Avocado Spring Rolls are renowned and as we learned, patented.  While competing chains have tried to duplicate their success, none have been able to topple their delightful sundried tomato and chunky avocado-filled creation. As if these weren’t pleasing enough, we tried also their Sweet Corn Tamale Cakes – just heavenly topped with Pico de Gallo and avocado, leaning perhaps more towards thin, fried cornbread patties than their actual namesake.

The Cuban Sandwich came highly-recommended also and did not disappoint. Sizable and paired with a side of salad or fries, layers of roast pork and ham sat on thinly-slice pickles and swiss cheese.  You certainly don’t leave this place hungry.

We learned also that The Cheesecake Factory‘s top-selling cakes are in exact order: their classic Fresh Strawberry, Ultimate Red Velvet Cake (which for a short time was #1) and recent addition, Celebration (think colourful Funfetti Birthday Cake!).  We already have reserved space in our tummies for Oreo and Key Lime varieties on a future visit!

The buzz is deafening for this inaugural Canadian location. Throughout our visit we could see mallgoers try to get in despite the Restaurant being open for invitees only.  Expect big lineups and expect additional announcements to come soon.  We predict a smashing success for The Cheesecake Factory here in Canada.

Watch our experience at The Cheesecake Factory Yorkdale right here: 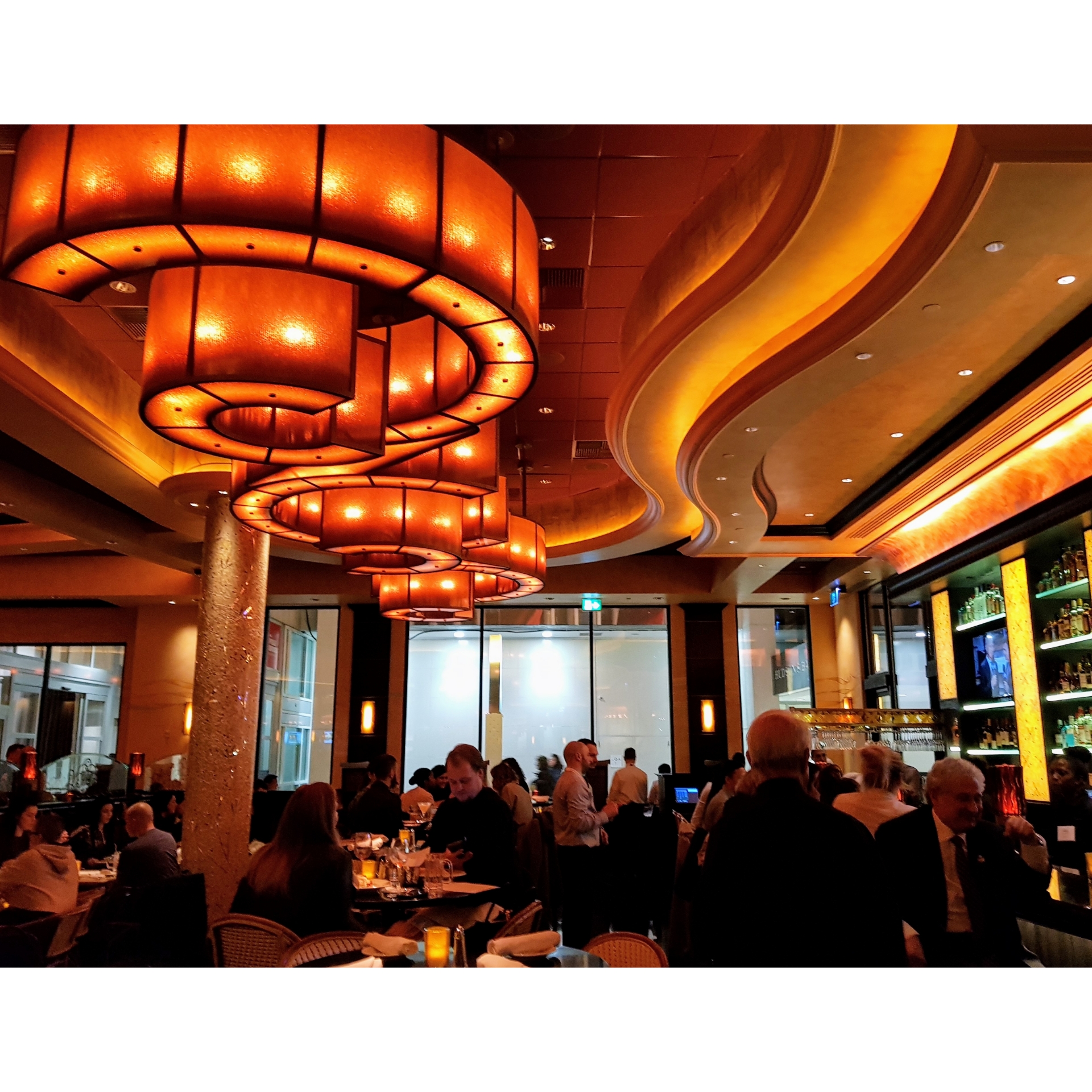 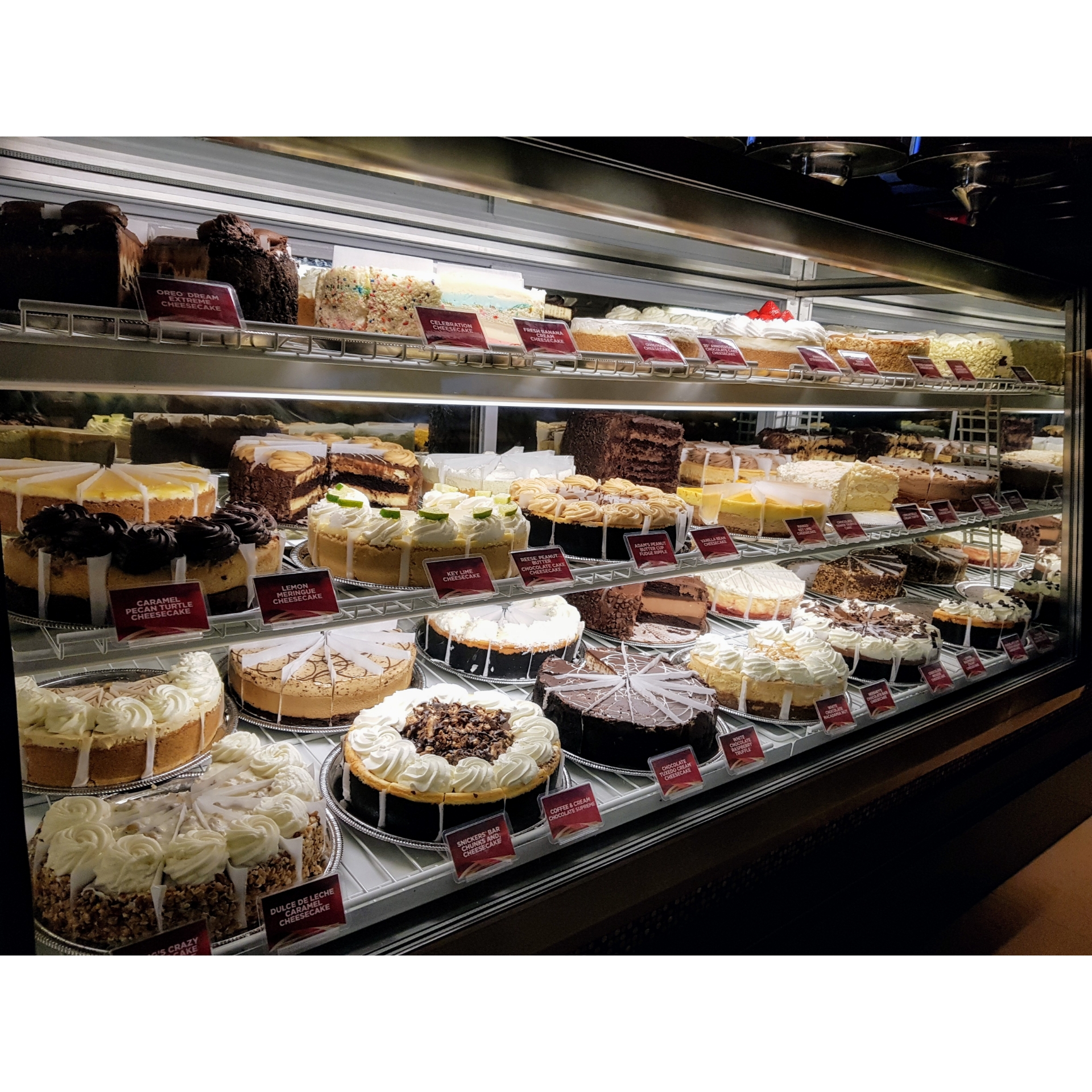 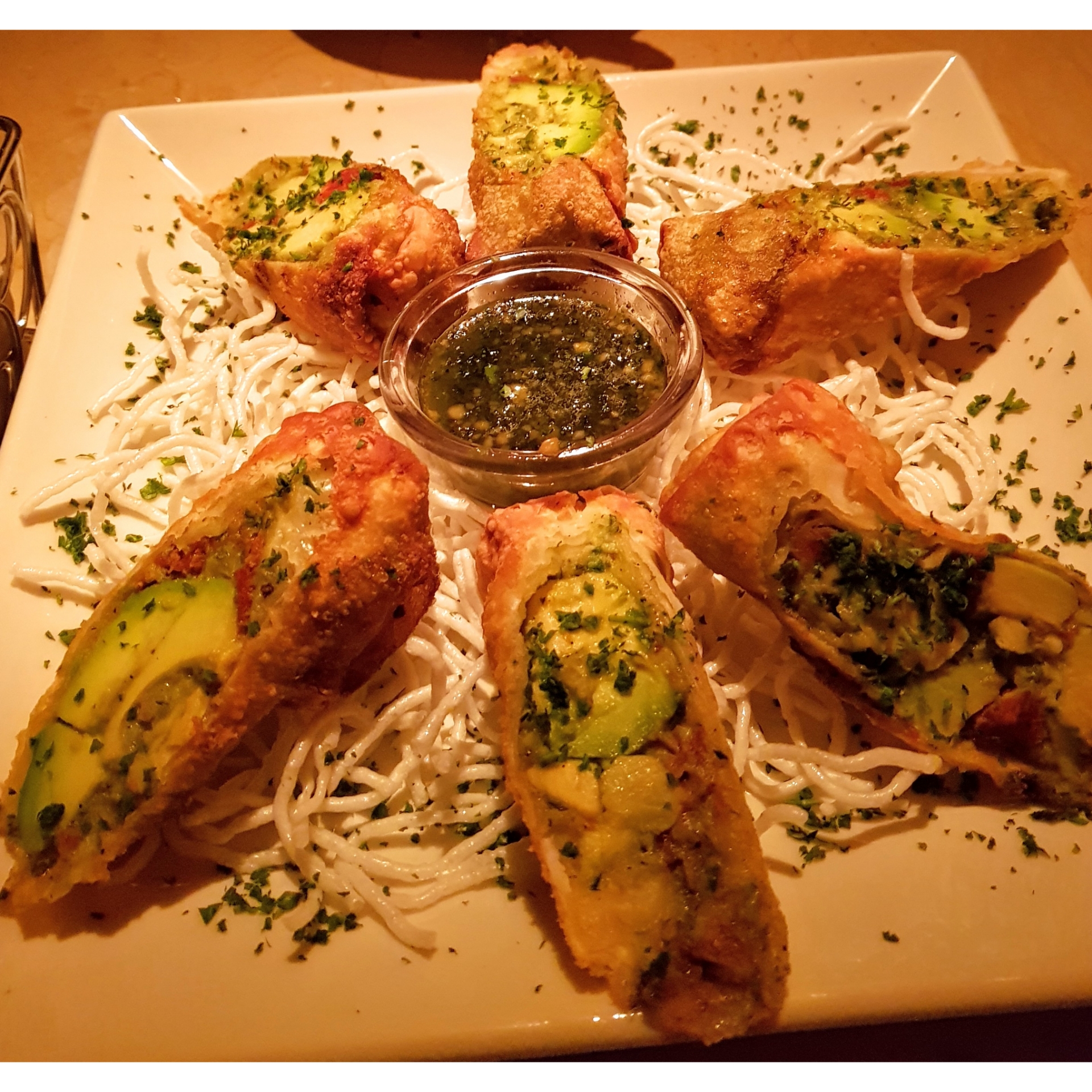 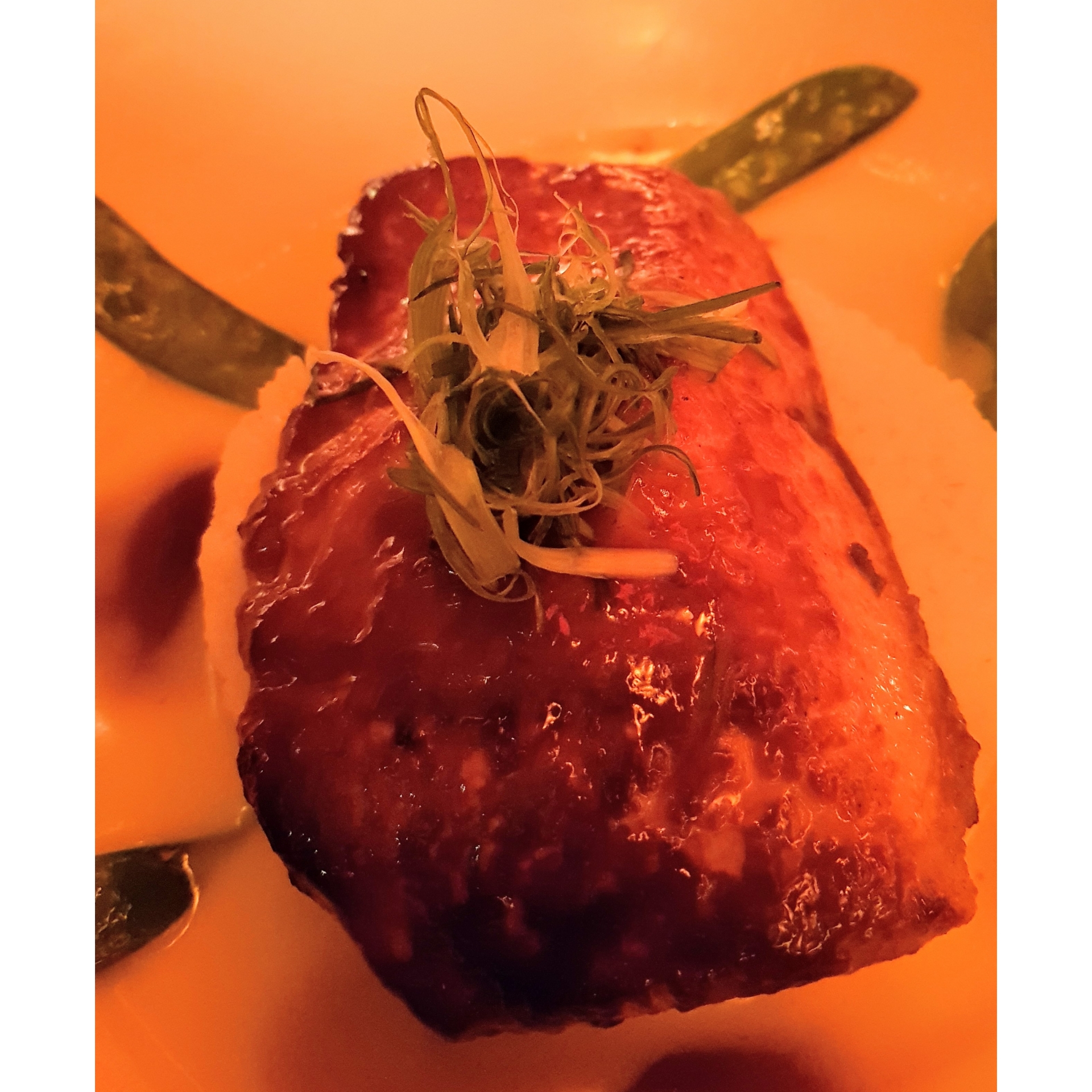 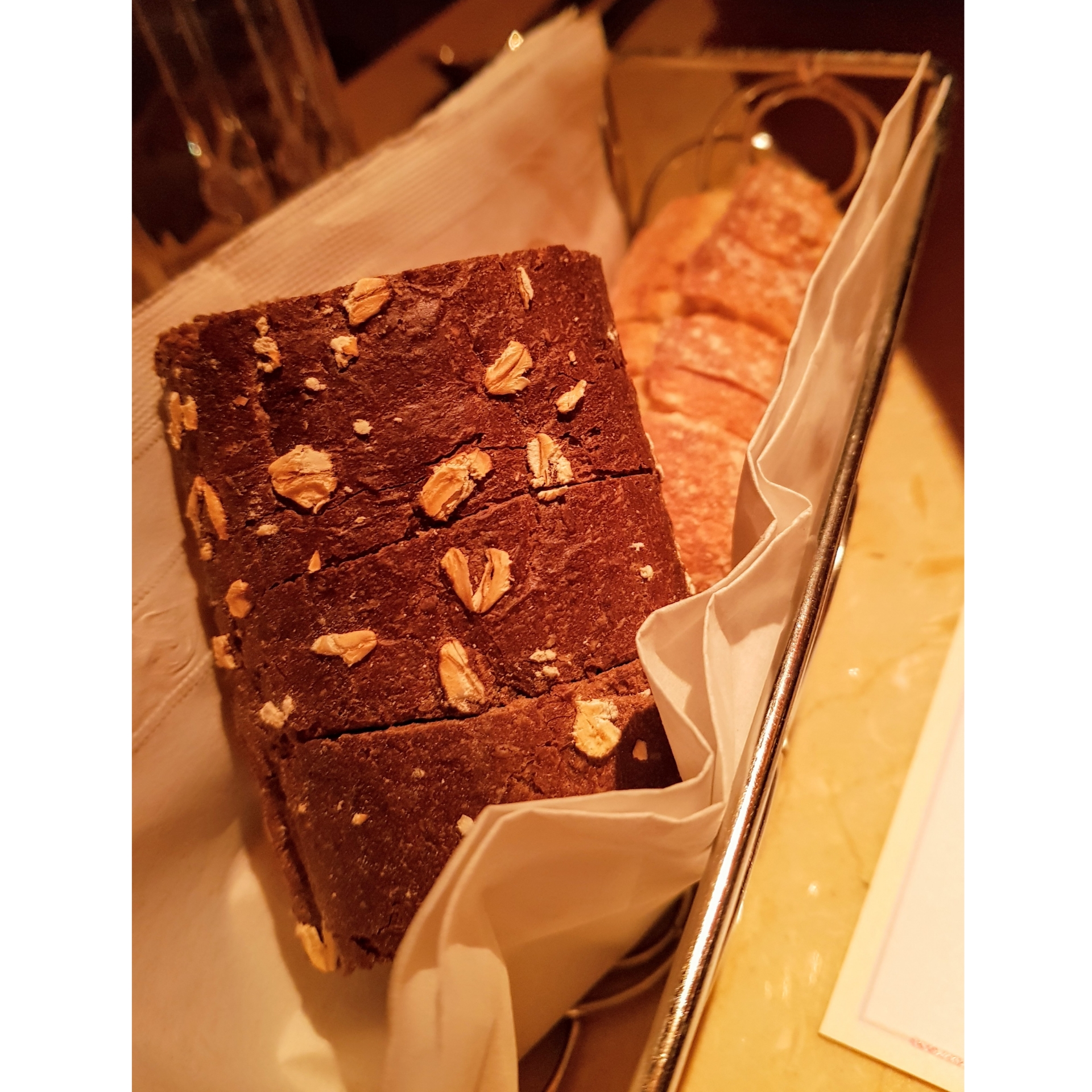 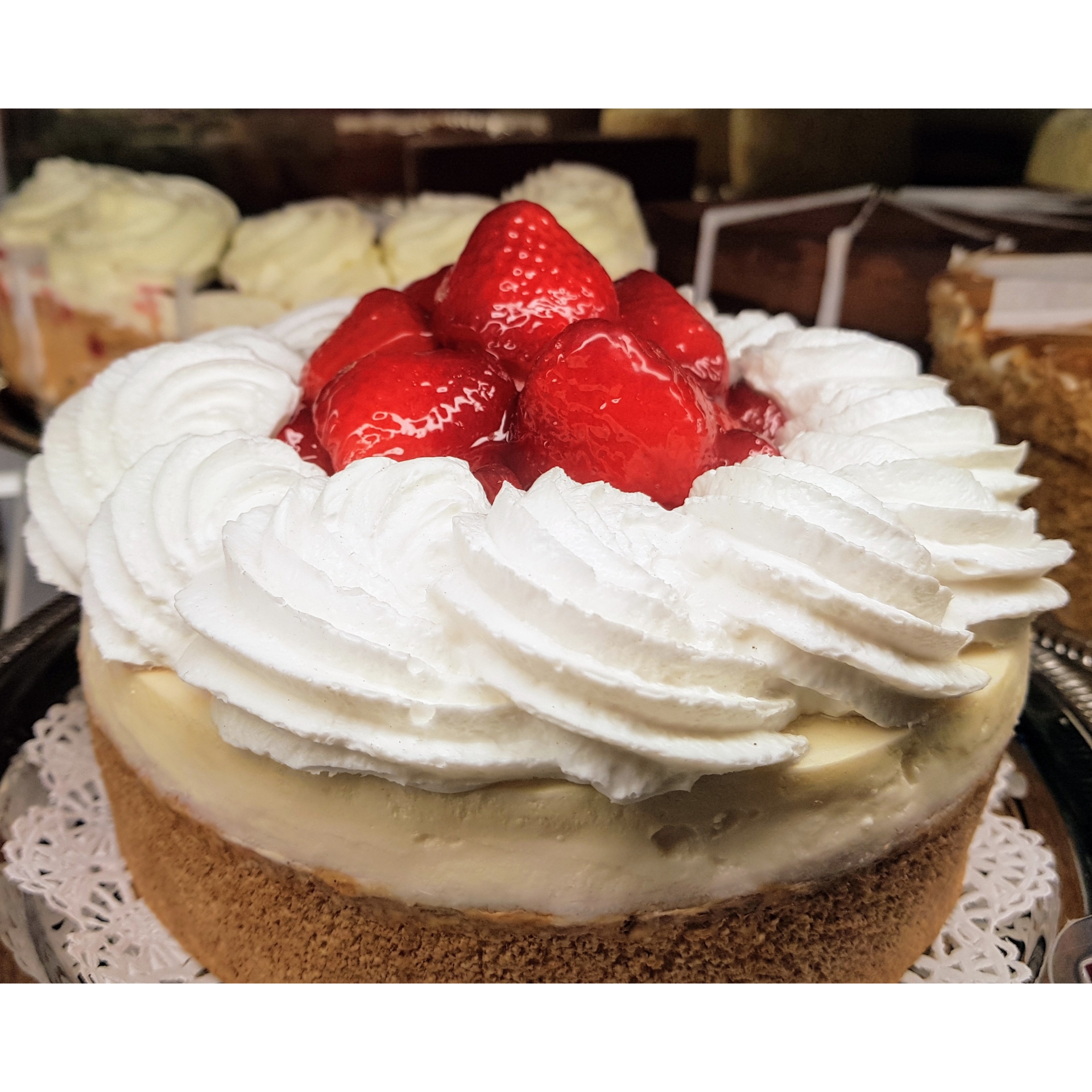 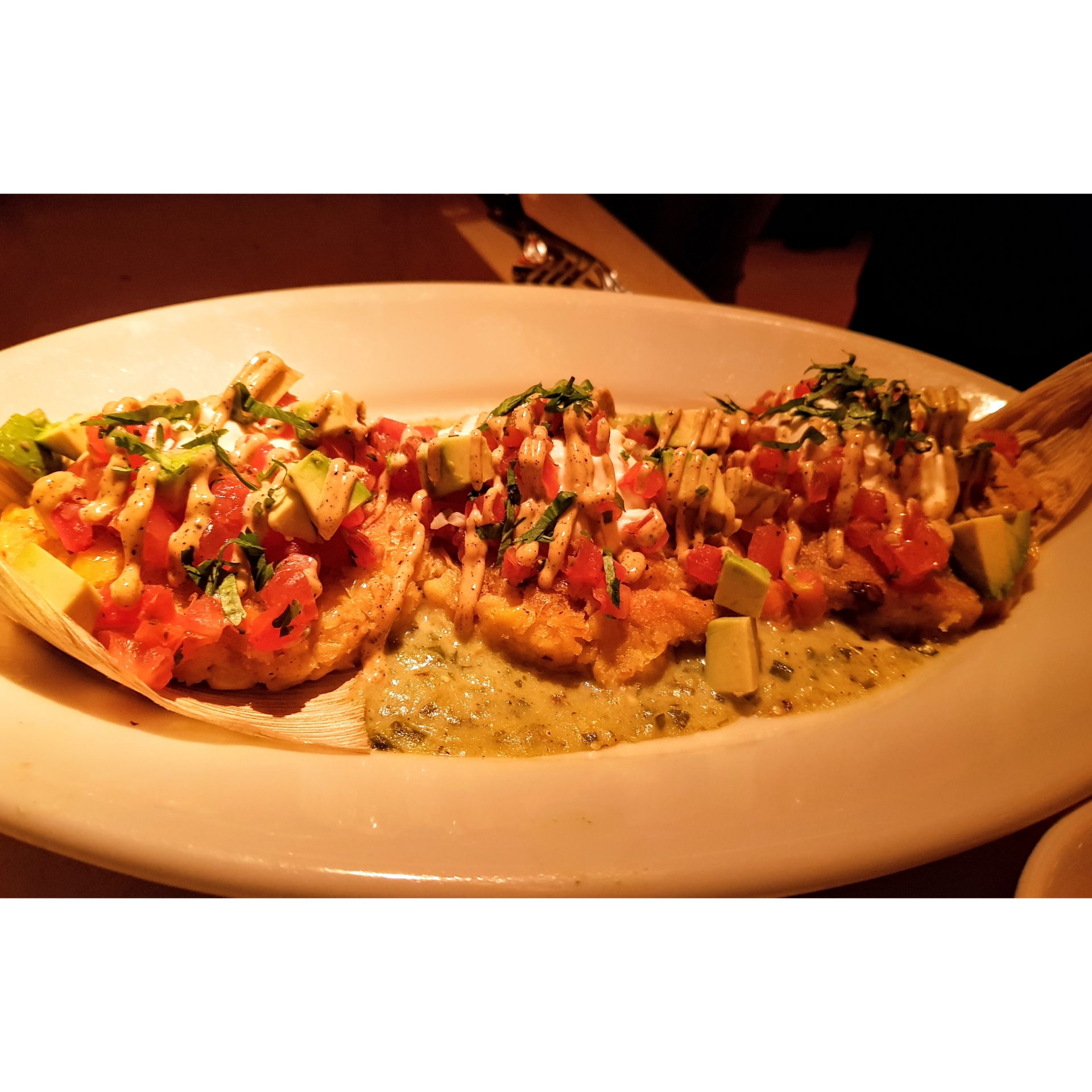 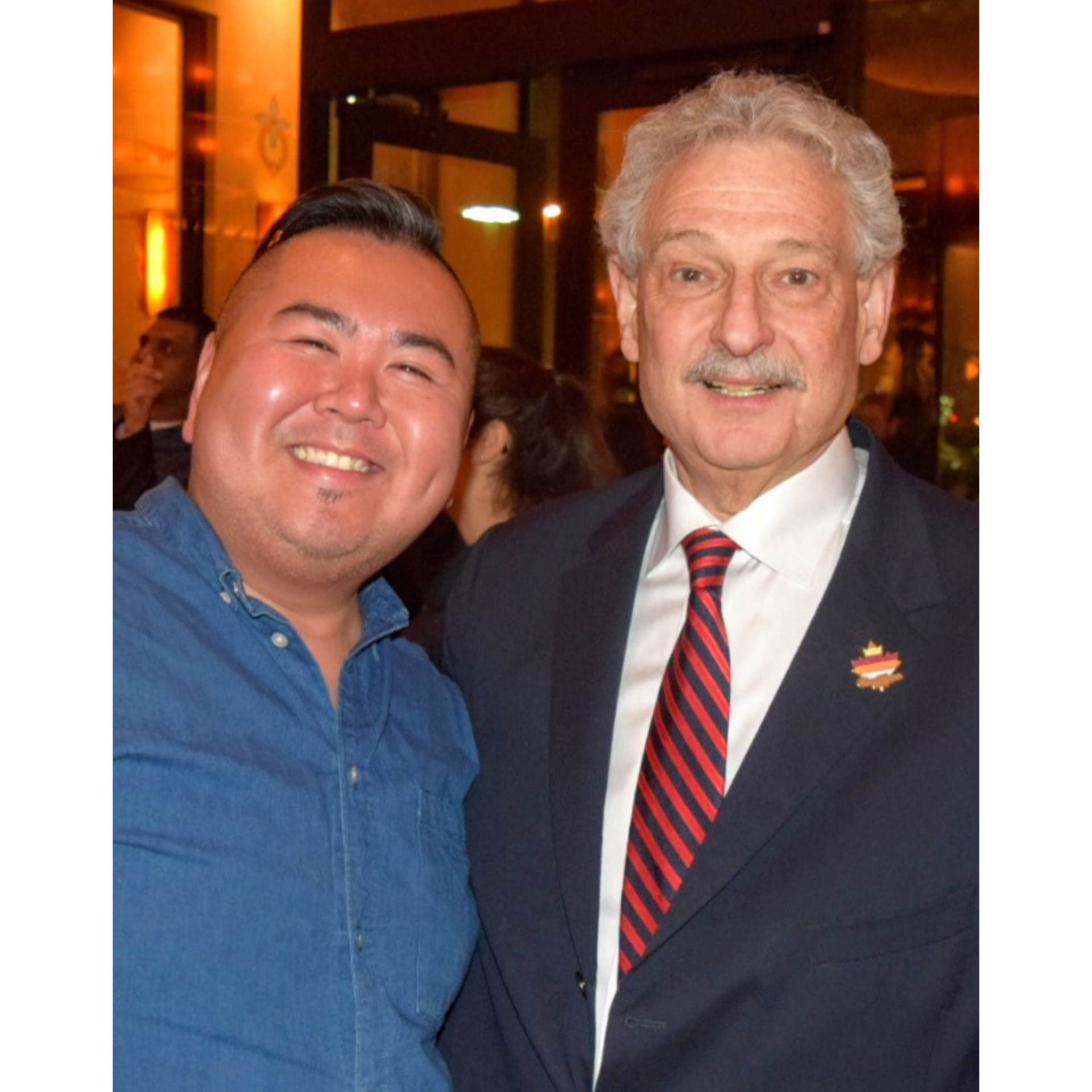 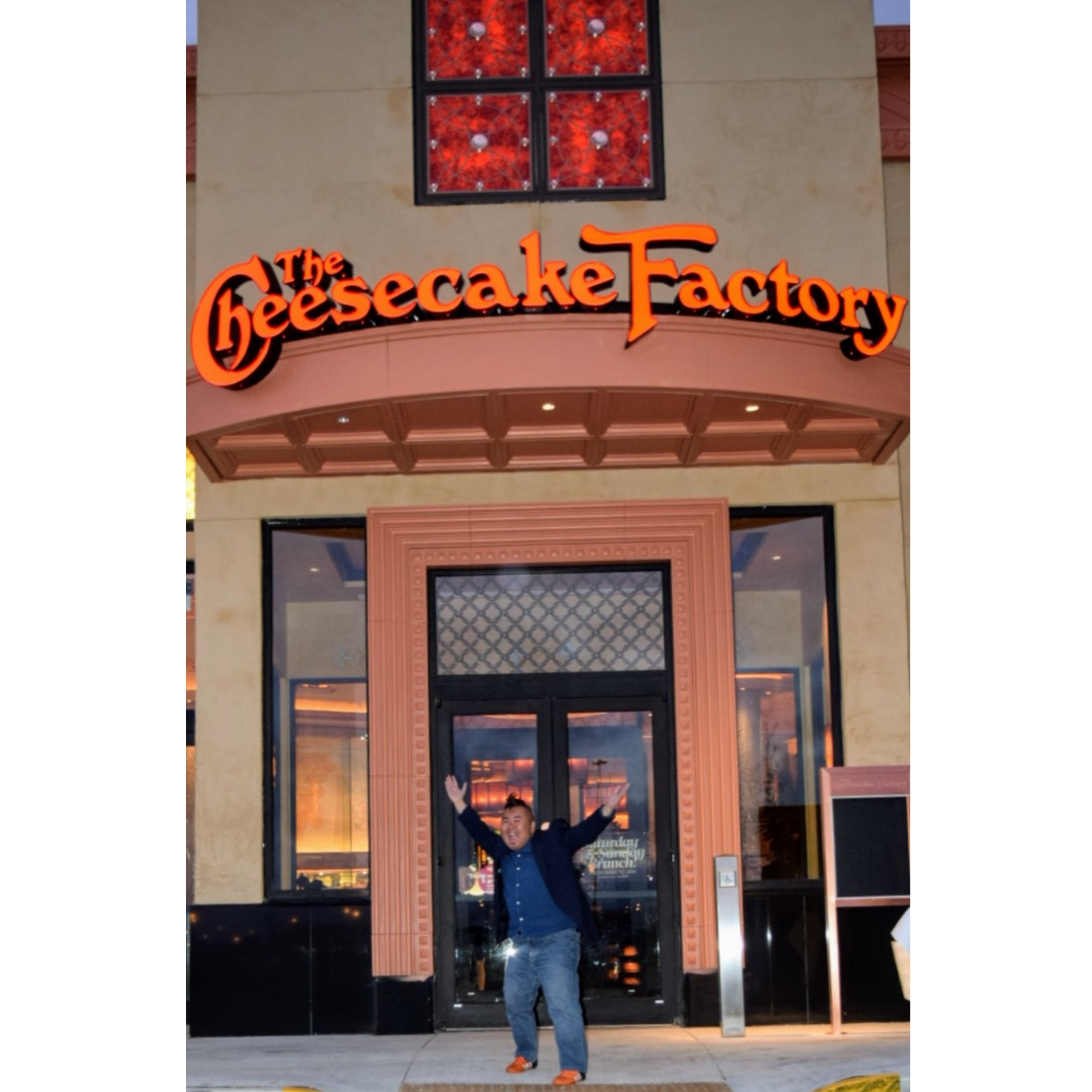 All video and photography done on the Samsung Galaxy S8+.

Okay, this is not a dream.  It’s finally happening.  THE CHEESECAKE FACTORY at Yorkdale Shopping Centre is indeed a thing and while some had their doubts it ever would come to fruition, the widely-adored American eatery is almost ready to open its doors to the public! TUESDAY, NOVEMBER 21, 2017 is the set opening date for the first ever Canadian location and as you read this they are currently hiring staff.  The company has been named among FORTUNE Magazine’s “100 Best Companies to Work For” and we can see exactly why!

While massive lineups are expected upon launch, you can plan ahead by knowing their business hours which are as follows:

The Menu will contain 250+ items including Avocado Eggrolls, Almond-Crusted Salmon Salad, Fettuccini Alfredo, Waffles, Tacos and more, plus over 30 different types of their world-famous Cheesecake.

In the meantime, keep up to speed with The Cheesecake Factory‘s official Canadian Facebook Page here.

We’re so ready for this. Are you?

#FOOD: THE CHEESECAKE FACTORY COMING TO TORONTO FALL 2017 AT YORKDALE

For 40 years The Cheesecake Factory has been filling the tummies of Americans with decadence and value. Although the tease has been a long one for Canadians who already know their greatness through their cross-border adventures, the time has finally come for us in Toronto!

It was announced earlier today that The Cheesecake Factory will launch its first Canadian location at Yorkdale Shopping Centre this fall! The 10,400 sq. ft. space with two covered patios, will be situated in the A-tier mall’s north side.

We’ve tried their cheesecakes on many occasions but have never had the time for a sit-down and we’re beyond thrilled! 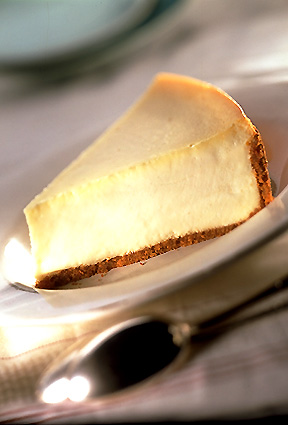 Yes, it’s really happening, Toronto!  Famed The Cheesecake Factory finally is coming north and Insiders  reveal to a reliable Source  that none other than über-glam Sherway Gardens in Etobicoke is being eyed as Home to the beloved American Eatery, which has a Legacy tracing back to the ’40s.  The Restaurant is primed as  one of several additions to the upscale Shopping Centre’s forthcoming Expansion plans.

Currently, Torontonians can get a taste of their delicious Entrées, Salads, Sandwiches and Desserts at Walden Galleria in Buffalo, New York.  Top-tier Grocer Pusateri’s in Yorkville also offer a few Selections of their Cakes and Cupcakes currently.

Click here to see the amazingness they have to offer on their Menu.

No word yet on the Opening Date, whether 100% it will indeed be Sherway Gardens, and to what extent the Menu here might mirror that of its American Counterpart, but it’s soon to be confirmed we’re hearing…

Check-out some excited Reader Reactions to the News: 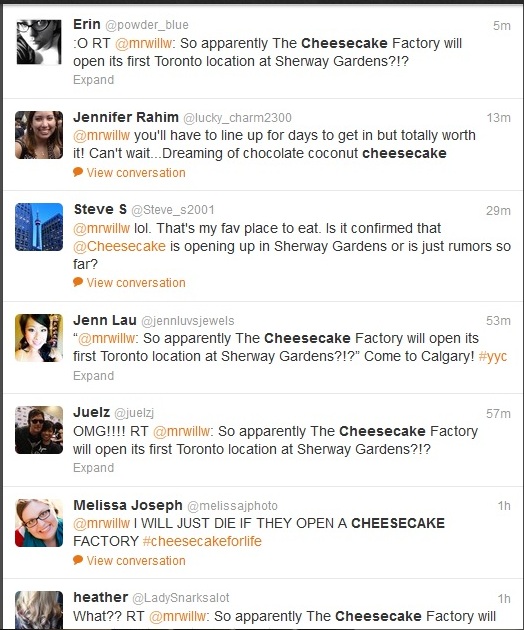 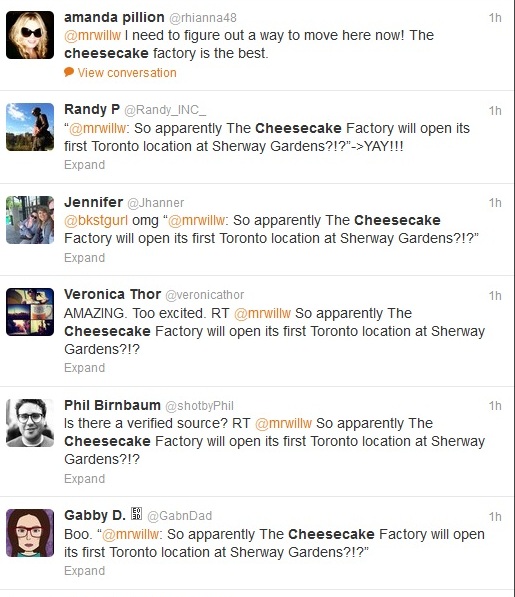