In what has become known as an annual Cavalcade of Urban Music Stars, Drake presented Toronto the fifth annual OVO Festival at Molson Amphitheatre this weekend, timed together with Caribana (Scotiabank Toronto Caribbean Carnival).  Once again, Toronto’s Homeboy did not disappoint, unveiling a surprise list of Performers including Lauryn Hill, J. Cole, Tinashe, DJ Khaled, Trey Songz, 50 Cent & G-Unit and of course the biggest Jawdropper of all, Usher!  And we were among the first to confirm with our eyes that Usher was in fact here, rushing in and out of his Yorkville Hotel earlier today with his Entourage.  Outkast returned to the stage to headline the first night of the Festival Sunday.

Drake zipped through 40 songs from his three-album Discography, and even brought his proud Mom, Sandi Graham, on-stage at one point.  He confirmed his plan to proceed work on his next Album in Toronto after touring with Lil Wayne.

Although he v. much was focused on work today, which left several Fans waiting outside his Residence hoping for a little acknowledgment frustrated, the multi-talented Magnate delivered his best foot forward leaving OVO Festival Goers completely satiated!

Others in town including NBA Star Kevin Durant, Justin Bieber‘s Manager Scooter Braun and several more came out to support the Show tonight.

The most giving of all Performers to Fans had to be Usher who surprised just about everyone waiting outside his Hotel, taking a Photo with anyone who asked. Believe me, this is an absolute rarity for the Megastar as I have counted multiple failed attempts to get that coveted Photo with him.  But this time I succeeded!  His is now prepping the release of his eight Studio Disc, Everything You Can Imagine!

See some Video of Usher greeting lucky Fans below: 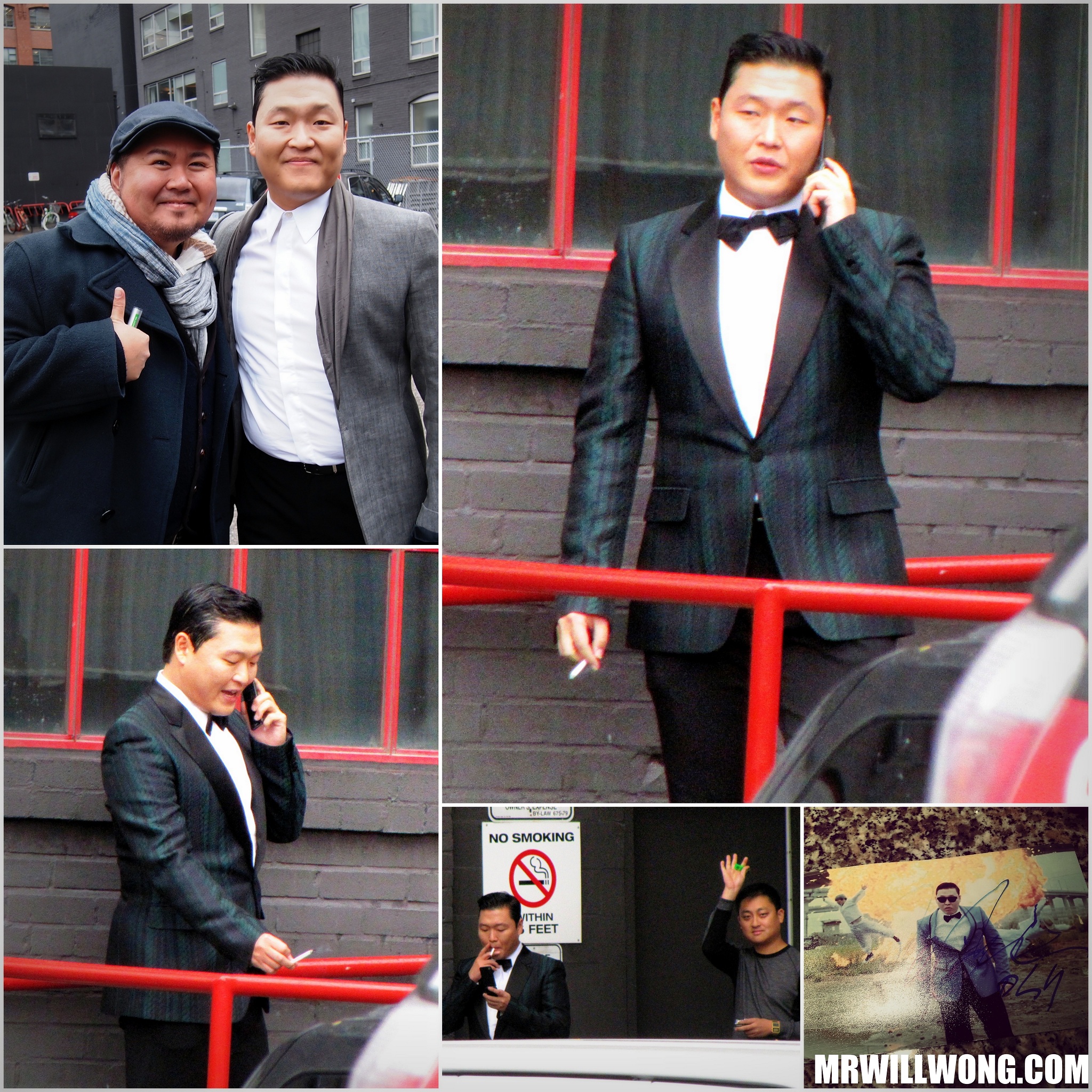 Hey, Sexy Lady!  Korean Megastar PSY cut it awful close, but would not let a little setback like Hurricane Sandy get between him and his Fans.  The Rapper/Singer known best in these parts for his Smash Hit Gangnam Style, originally was scheduled to arrive last night in Toronto, but due to flight cancellations amidst the Storm – which has crippled much of the U.S. East Coast – he opted for an overnight flight in from New York City.

Currently sitting ever so patiently at Number Two on the U.S. Billboard Hot 100, PSY is working hard for that elusive Number One, although Canadian Fans have not been shy with their support, making Gangnam Style the number one Song in the Country on the Canadian Hot 100.  The Viral Sensation who currently is under the guidance of Scooter Braun (Justin Bieber, Carly Rae Jepsen) and also Universal Music Canada, is set to make an appearance to Kool Haus tonight to launch the Samsung Galaxy Note 2, a Party which Fans clamoured to get Tickets for on Facebook last week.  Five lucky Fans tonight will be dancing his way to PSY‘s heart, winning a chance to meet him and also an Autograph.

Although he was v. focused on work at the Bell Media Building earlier today with Interviews scheduled for eTalk, MuchMusic and also The Marilyn Denis Show, he took a couple moments out to re-energize with a Cigarette Break after an early start to his day which saw him visit Virgin Radio 99.9 and also KISS 92.5 prior.  Myself and another lucky Fan were extremely thrilled to be called over by his Handler.  Appearing a bit tired, PSY was more than gracious, looking impeccable in his gray Blazer to snap a couple Photos.

I am thrilled to offer my Readers a chance to win a Photo signed by PSY!  To enter to win, simply click “like” on this Post at Mr. Will Wong on Facebook. You should also be following on Twitter. All are welcome to enter a chance to win this v. rare Prize!  Your deadline is December 1, 2012.  Good luck.

Watch a quick Clip of PSY on his Break earlier.  The Audio Commentary is hilarious!