Julia (Maika Monroe) moves to Bucharest, Romania with her husband when he relocates for a new job. With no job of her own, she spends most of her days alone. When news serial attacker The Spider is suspected to be in her area, she becomes increasingly suspicious. She then notices her neighbour watching her from his apartment window and follows her around Bucharest.

Watcher is a slow-burnng Thriller with a great payoff. Writer-Director Chloe Okuno builds constant tension through lighting that creates shadows hinting at a lurking danger. The empty streets of Bucharest are used to haunting peak effect. Offering up an unsafe environment for Julia to exist with a violent attacker on the loose. Okuno mixes these eerie visuals with an unsettling score from Nathan Halpern.

The steady pace of the Script, co-written with Zach Ford, allows for the doubt to creep-in. Julia’s pleas to her boyfriend and police aren’t taken seriously. They hush her up or attempt to rationalize her statements. Ford and Okuno add the extra layer of Julia being thrown into a country and a language she’s unfamiliar with to add to the anxiety. All these things pick away at the audience, making them question if what we’re seeing is just our protagonist’s paranoia.

This type of gaslighting eventually makes Julia question herself. In the careful hands of Monroe, Julia’s nervous demeanour is portrayed with an exactness. Monroe shows Julia’s confusion to stick with her intuition and the self-doubt everyone around her is causing. This highlights a theme in Watcher about society demeaning women’s pleas and labelling them as paranoia. Okuno, Ford and Monroe come together to effectively deliver the message of always trusting your intuition.

Mickey and Jules (Bill Skarsgård and Maika Monroe) are young lovers and criminals on the run. When they break into a secluded home in the woods they meet a sweet-as-pie couple who have a dark secret they don’t want to get out.

Villains is your typical Bonnie and Clyde feeling Film but with a hilarious twist. Co-Directors and Writers Dan Berk and Robert Olsen comedically play with the concept of what if the people who are committing the crime become the victims. It offers all around great performances from a knockout cast consisting of Kyra Sedgwick, Jeffery Donovan, Monroe and Skarsgård, who gets to show off his comedic talents.

Universal Pictures Canada x Mr. Will want to give Readers a chance to win Advance Passes to a Toronto screening of TIFF ’18 selection GRETA.

Synopsis:
A sweet, naïve young woman trying to make it on her own in New York City, Frances (Chloë Grace Moretz) doesn’t think twice about returning the handbag she finds on the subway to its rightful owner. That owner is Greta (Isabelle Huppert), an eccentric French piano teacher with a love for classical music and an aching loneliness. Having recently lost her mother, Frances quickly grows closer to widowed Greta. The two become fast friends — but Greta’s maternal charms begin to dissolve and grow increasingly disturbing as Frances discovers that nothing in Greta’s life is what it seems in this suspense thriller from Academy Award®-winning director Neil Jordan. 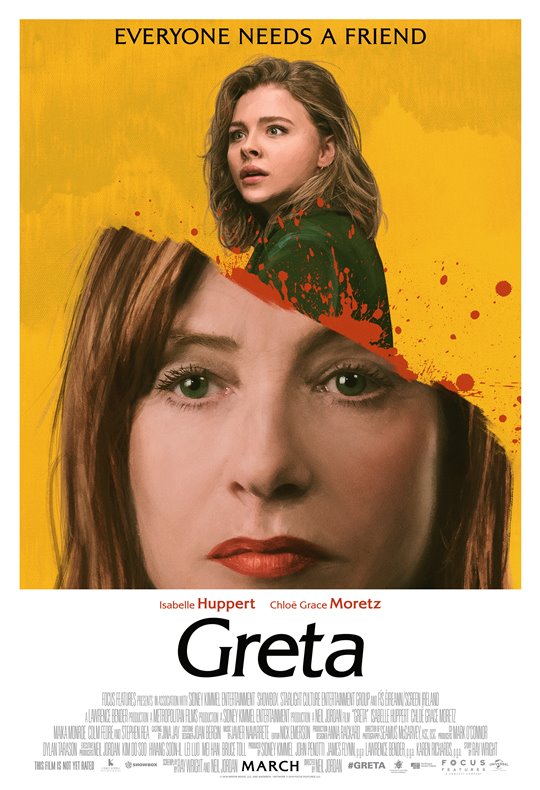 Greta follows sweetheart Frances (Chloë Grace Moretz) who after finding a woman’s purse left on the subway returns it to its owner, Greta (Isabelle Huppert). When Frances and Greta soon start up a friendship together, Greta’s dark and true intentions come to light. It will have its World Premiere in the Special Presentations Programme at TIFF.

Director Neil Jordan is back again with another Psychological Thriller that chills us to the bone. With every beautifully-captured frame of this, we see the sinister mind of Greta come more and more to the surface. No one else but Huppert could pull off a role that is as horrifying as it is comical.