“I clearly had one drink too many and I am deeply embarrassed about the things I said. It was definitely a scary situation and I was frightened for my husband, but that is no excuse. I was disrespectful to the officer who was just doing his job. The words I used that night definitely do not reflect who I am. I have nothing but respect for the police and I’m very sorry for my behaviour.” – Reese Witherspoon on her Husband’s and her arrest Friday.

I often make every effort to steer clear of Gossip on my Blog, but wanted to take this opportunity to point-out that there are Celebrities who are genuinely kind-spirited and of course, there other Celebrities who view being “nice” as a chore, saving their graces for when the Cameras are on them.  Although I don’t like lumping People into categories, I’d say Witherspoon veers more towards the latter.  Shocking, right?  After all, she’s been called at one point in her Career, “America’s Sweetheart”.

I’ve met the Oscar-winning Actress on a couple occasions and am saddened to say she simply isn’t Fan-friendly nor does she care to express appreciation for their support.  Many years ago pre-Oscar and post-Legally Blonde, I met the Actress at a Premiere for her Film during TIFF.  It was just her, her Handler and me – nobody else around – and I asked kindly for an Autograph.  “Sorry, I’ve got a flight to catch”, she replied as she continued walking on by not once looking back or at me. Of course, she was snapped later that evening at an Afterparty for the Film.

It was nice snapping a Photo of her back though: 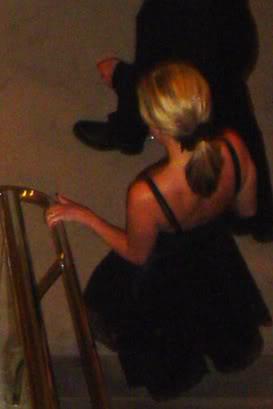 I even once sent her a thoughtful piece of Fanmail when she filmed in Vancouver and although all her other Co-Stars were nice enough to return Autographs signed, hers was the only one not to be acknowledged.  Believe me, I understand the fine line between harassment and respecting privacy, but it would appear Witherspoon simply isn’t that nice a Person and I’m sorry to say it, Legally Blonde Fans! I’m actually kinda not shocked about this news of her being charged with Disorderly Conduct in Atlanta, as harsh as that sounds.

Video of the Arrest below:

We all pay a price with Karma, don’t we?