We always knew Keira Knightley was funny! After premiering at TIFF ’14, LAGGIES is about to see its release and we love everything about its Trailer from one, KEIRA, to its themes of Adults coming-of-age (we adore 13-Going-on-30). The pairing of Knightley and a beyond-her-years Chloë Moretz is a perfect counterbalance.  Lynn Shelton (Your Sister’s Sister. Safety Not Guaranteed) directs.

Official Synopsis:
Megan (Keira Knightley) is a 28-year-old woman stuck in a permanent state of adolescence. Unable to find her career calling, she is still hanging out with the same friends, and living with her high school boyfriend. When an unexpected marriage proposal sends her into a panic, she crosses paths with 16-year-old, Annika (Chloë Grace Moretz) and must finally learn to navigate her own future.

See the Trailer for LAGGIES:

Official Synopsis:
Gretta and her long-time boyfriend Dave are college sweethearts and songwriting partners who decamp for New York when he lands a deal with a major label. But the trappings of his new-found fame soon tempt Dave to stray, and a reeling, lovelorn Gretta is left on her own. Her world takes a turn for the better when Dan, a disgraced record-label exec, stumbles upon her performing on an East Village stage and is immediately captivated by her raw talent. From this chance encounter emerges a portrait of a mutually transformative collaboration, set to the soundtrack of a summer in New York City.

See some Snaps of Adam Levine at TIFF ’13 for BEGIN AGAIN here.

http://mrwillwong.com/beginagain @MRWILLW wants us to #win Passes to see #BEGINAGAIN! In theatres 7/11!

12 Years a Slave was awarded Best Picture at the 62nd annual BAFTA Awards at London’s Royal Opera House earlier today and is believed by many to be the definitive choice to win in the same Category at next month’s Academy Awards in Los Angeles.  Despite receiving a whopping ten nominations, the Drama directed by Steve McQueen, took home two Awards, with British Actor Chiwetel Ejofor taking Leading Actor in an Awards Season stateside which has been dominated by Matthew McConaughey.

Also awarded today were Cate Blanchett for Leading Actress in Blue Jasmine – a feat she likely will repeat at the Oscars, an absent Jennifer Lawrence for Supporting Actress in American Hustle and Barkhad Abdi for Supporting Actor in Captain Phillips.  Will Poulter, who starred in last year’s Box Office Smash We’re The Millers, was awarded the EE Rising Star Award.

The Star of the Evening being Grey Goose‘s LE FIZZ Cocktail (Recipe here!), the Libation named the Celebratory Drink of Choice. For Appetizers, Guests enjoyed a variety of Canapes, Scallop and Grapefruit Ceviche, Cavolo Nero Crisps and Prawn and Guacamole Skewers. The luxurious three-course Dinner included: Quinoa, Beetroot, Cucumber and Radish followed by Roast Fillet of Beef, with a light Lemon Meringue for Dessert.  WWWT (wish we were there)!!!

Paramount Pictures Canada and Mr. Will Wong are thrilled to give Readers in Montreal, Ottawa and Toronto a chance to see Jack Ryan: Shadow Recruit!

Based on the CIA analyst created by espionage master Tom Clancy, “Jack Ryan: Shadow Recruit” is a blistering action thriller that follows Ryan (Chris Pine, “Star Trek”) from his quiet double-life as a veteran-turned-Wall Street executive to his all-out initiation as a hunted American agent on the trail of a massive terrorist plot in Moscow.

Ryan appears to be just another New York executive to his friends and loved ones, but his enlistment into the CIA secretly goes back years. He was brought in as a brainy Ph.D. who crunches global data – but when Ryan ferrets out a meticulously planned scheme to collapse the U.S. economy and spark global chaos, he becomes the only man with the skills to stop it. Now, he’s gone fully operational, thrust into a world of mounting suspicion, deception and deadly force. Caught between his tight-lipped handler Harper (Academy Award-winner Kevin Costner), his in-the-dark fiancée Cathy (Keira Knightley) and a brilliant Russian oligarch (Kenneth Branagh), Jack must confront a new reality where no one can seem to be trusted, yet the fate of millions rests on his finding the truth. With the urgency of a lit fuse, he’s in a race to stay one step ahead of everyone around him.

The gripping Trailer below:

To enter to win, simply click “like” on this Post at Mr. Will Wong on Facebook!  Indicate for me your City and tell me if you were to have a secret second Career, what it would be! 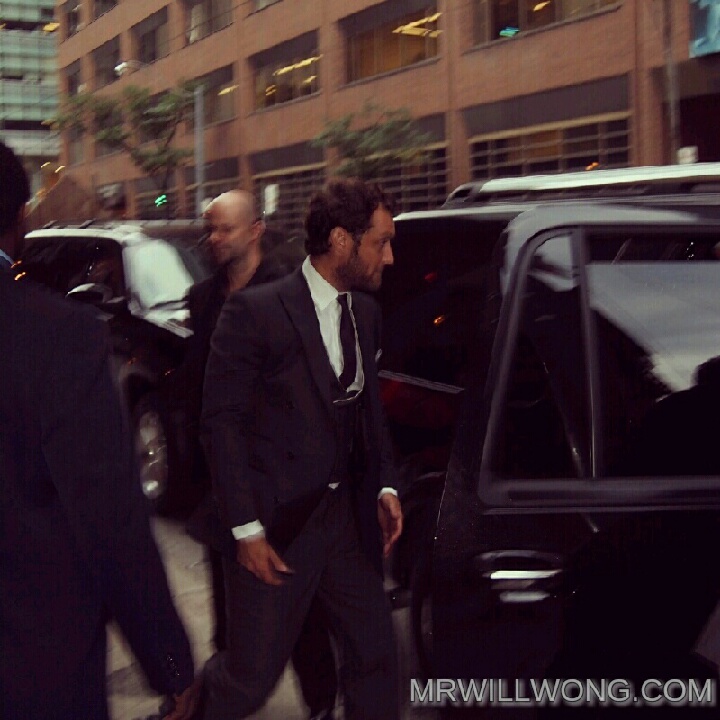 Garnering tons of praise already is Anna Karenina from Director Joe Wright.  The Romantic Drama starring Keira Knightley premiered earlier this evening at VISA Screening Room and although Knightley was keen on staying to watch the entire Film, Jude Law and Aaron Johnson both skipped-out for a Dinner Break.  Law zipped through a few Autographs, declining Photos citing “If I take one Photo, I’ll be here forever doing this.”.  And he was firm about it.